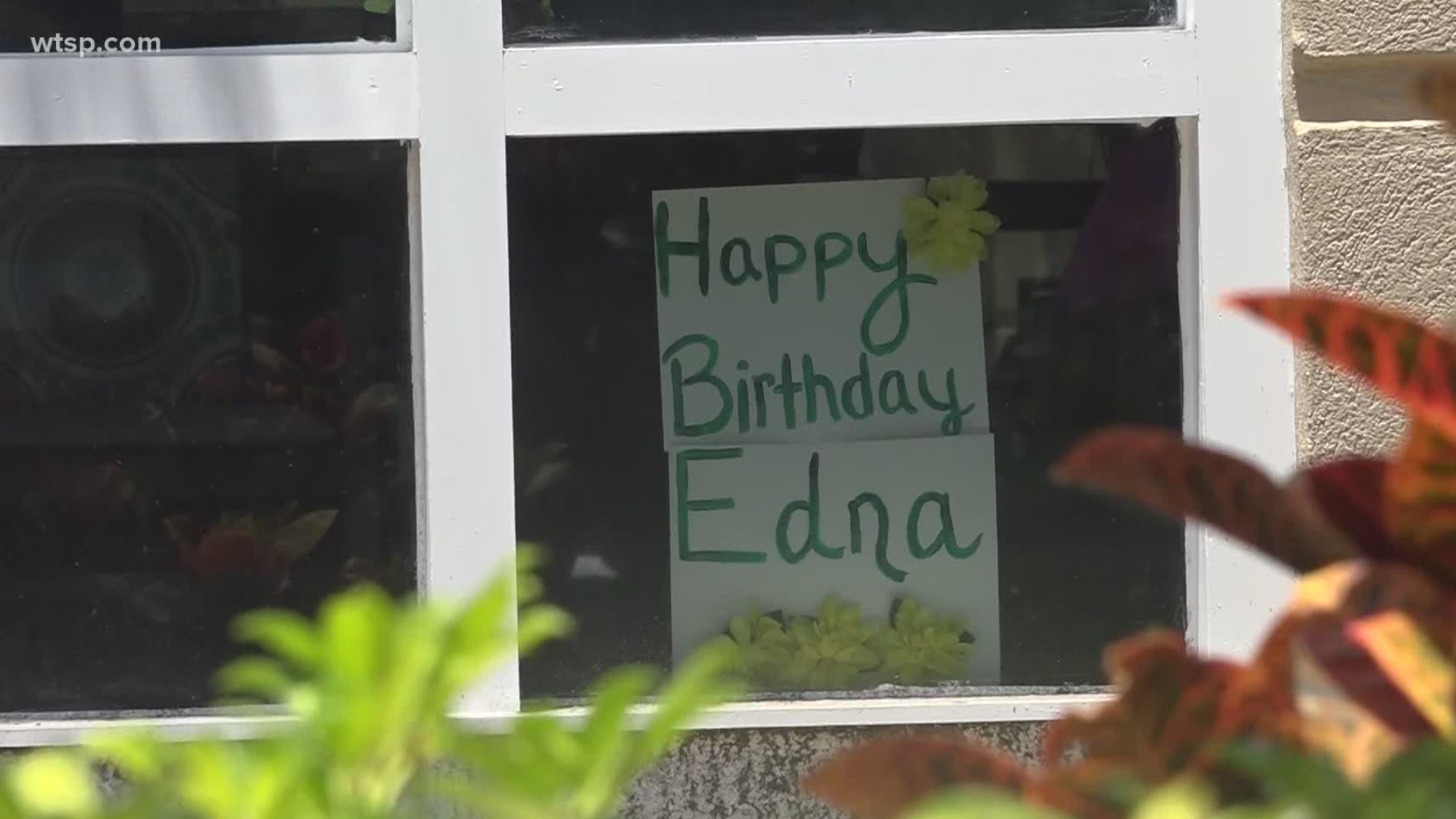 LARGO, Fla. — Edna Wienkoop looked out the window of The Barrington in Largo and smiled a smile only a centenarian can smile. The Largo resident, who turned 105 on Tuesday, couldn’t help but grin as her family and friends paraded by in their cars, honking their horns and waving signs.

A birthday parade was a first for the New York native.

“I haven’t been able to see her in two months,” said Edna’s daughter-in-law Paula Wienkoop. “It’s been distressing for me.”

Edna, who was born just north of New York City, moved to Florida in 1978 with her husband of almost 60 years. The couple had one son, Glen, who died in November 2019. Glen's widow, Paula, organized a small parade of about a dozen cars to drive by Edna’s home on Tuesday.

“She doesn’t know why God’s keeping her around. She said, ‘Oh, I’m so old’ at which I think it’s so funny because she doesn’t act her age,” said Paula. “Obviously, she’s meant to be here, to be with my son and I. We are close knit.”

Edna has only lived at The Barrington for a year. In fact, at 104, Edna was out driving on the road herself. She spent 35 years working for Reader’s Digest. According to Paula, Edna still receives a pension from the popular magazine, which was founded in 1922.

“She may be the last pensioner left,” said Paula.

Her daughter-in-law giggled when revealing that Edna “enjoys her chardonnay”. The 105-year-old last saw family face-to-face in February.

“I think this quarantine has taught everybody to value friends and family and even if you have to social distance you can still let people know that you care about them. So, it was a wonderful effort on my friend’s part,” said Paula. “I told her that we will get back to our Sunday dinners and, you know, I’m sure things will calm down.”

The parade only lasted a few minutes. After the other cars left, Paula got out and walked up to the window where Edna was seated. They traded smiles. Paula left gifts and cards with the staff at the assisted living facility. They waved once more before Paula got back in the car to leave.

“I love you,” she said said through the window.

Edna blew her a kiss.