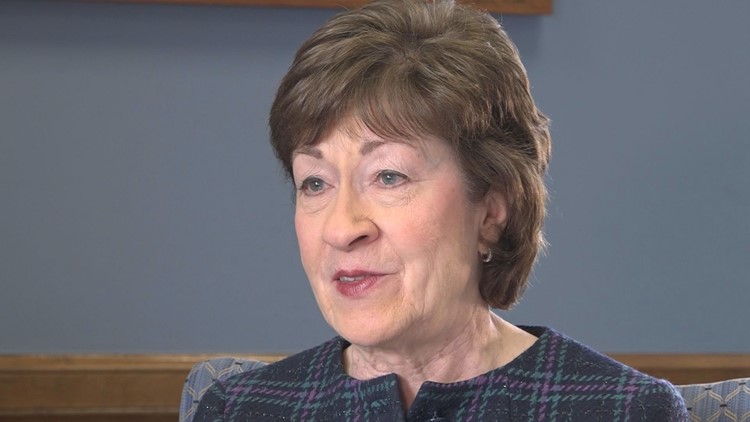 It's no secret that the impeachment proceedings have been taking over television screens across the nation this week. That's why on Saturday night, one of the most beloved comedy shows in America decided to poke a few jabs at the most recent developments.

Saturday Night Live began the cold open for its first episode of 2020 by bringing in actors to portray none other than Maine's Senator Susan Collins, alongside Senate Majority Leader Mitch McConnell.

"I wanted to see what you thought of the Democrats' case," Bennett asks Strong.

"Well, I was upset that Adam Schiff said Republicans are afraid of standing up to the President," Strong said defensively, via an uncanny imitation of the Senator. "Why, if Trump ever tried to intimidate Susan Collins, I'd walk right up to him and say..."

Strong then starts to mutter inaudibly while staring at the ground, pointing her finger first angrily, and then ending her sentence with the words, "I love you" -- a spoof at the frustration Mainers and Americans have experienced with the Senator during the past year and a half, not knowing quite where she stands on the political spectrum.

Bennett then calls the impeachment proceedings a 'sham' and a 'hoax' -- pronouncing that word ironically by separating the two syllables, garnering laughter from the audience.

"Republicans are simply requesting a fair trial," Bennett insists. "No witnesses, no evidence. That way we can acquit President Trump and focus on the real criminals in this country -- teenagers who try marijuana."

Strong then butts in, insisting, "Well, the evidence against Trump is still pretty damning, so I'm still on the fence." Not to go unnoticed by the audience, however -- the exaggerated wink she gives at the end of that statement.

After that, McConnell introduces 'star' defense attorney Alan Dershowitz (played by Jon Lovitz) to rehearse arguments -- and the show goes on a journey, quite literally, to Hell. There, Lovitz runs into a slew of characters Dershowitz has represented in real life -- including Jeffrey Epstein, O.J. Simpson, and Claus von Bulow.

You can watch the entire skit featuring Cecily Strong as Senator Collins here:

To say fans were pleased with the episode and the humor would be, well, an understatement.

On Twitter, one user wrote, "What a brilliant opening!!!!! Takes all my arguments out of my mouth."

Another added, "So far, so good. I'm dying with anticipation!"

And yet, another said, "Y’all killed it with that opening tonight. Fantastic!!!"

The conversation about the impeachment proceedings, and Senator Collins' position, have clearly struck a chord this week with Americans, ever since opening arguments began Wednesday.

At this point, the Republican Senator has not yet determined whether she will vote in favor of having witnesses. Last week, Collins denied experiencing pressure from President Trump's administration, despite reports claiming that Trump aides were targeting moderate senators.

"I think that people who know me well know that I do not respond to threats or intimidation," Collins told NEWS CENTER Maine last week. "I'm going to do what I think is right."

RELATED: Sen. Collins has 'not really' seen anything that's 'stuck out to her' so far in Pres. Trump's impeachment trial

She also became frustrated with Democrats late Friday night, following House Manager Adam Schiff's remarks citing a CBS report that Republican senators were told their 'heads will be on a pike' if they do not side with the President.

RELATED: 'That's not true:' Sen. Collins speaks out against 'head on a pike' remark alleging Trump is threatening Republicans

Before opening arguments began, the Senator did break from her party, voting to allow more time for both sides to file response to motions, countering Republican leadership's attempts to speed up the trial.

At that point in time, she also released the following statement to NEWS CENTER Maine.

"While I need to hear the case argued and the questions answered, I anticipate that I would conclude that having additional information would be helpful," Collins said in statement to NEWS CENTER Maine. "It is likely that I would support a motion to subpoena witnesses at that point in the trial just as I did in 1999."

The critical vote regarding whether to allow witnesses and evidence in the trial is expected to happen sometime next week.