If you were sad to see The Pink Trap House go this past summer you’re in luck. It’s back once again just in time for those holiday selfies. 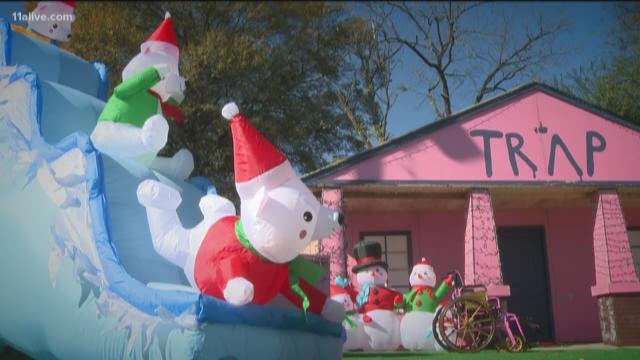 ATLANTA – Wondering what to do with your Christmas card this year? We have you covered.

If you were sad to see The Pink Trap House go this past summer you’re in luck. It’s back once again just in time for those holiday selfies.

Instead of the regular Pink Trap House that was popularized on social media over the summer, this holiday season Atlanta-based rapper, 2 Chainz, has turned it into Trap Wonderland.

According to 2 Chainz Instagram post, Trap Wonderland will be "family-friendly" so you’re free to bring the kids and get yet another chance to take selfies with the all-too-familiar Pink Trap House.

It’s only been open for a day and Trap Wonderland has already attracted visitors from neighboring states.

Kimberly Thomas traveled from Columbia, S.C., with her children, Joshua and Diamond, to see the display.

RELATED | The Pink Trap House is back with a holiday twist

“They were talking about it the whole way and I didn’t know there was a Pink Trap House,” Thomas said. “So, when I saw it on the news, I said, 'This is something positive.'”

Andres Blake drove six hours from Fayetteville, N.C., to see the house and get a selfie after he saw it on social media Thursday night.

Darren Guntrip from Winston-Salem, N.C., commuted to Atlanta for Thanksgiving, but once his family found out about the return of The Pink Trap House, their plans changed.

“It goes to show the camaraderie, the family and the bringing together,” Guntrip said.

It should be noted that The Trap Wonderland is at a different location than the original Pink Trap House. If you want to take that holiday selfie, head over to Street Execs Studios at 1740 Defoor Place in Atlanta.

It will be open for five weeks and will shut down at the end of December.