The crowds were so packed that it captured the attention of an 11Alive viewer, who sent in a photo of people waiting in line to get inside. 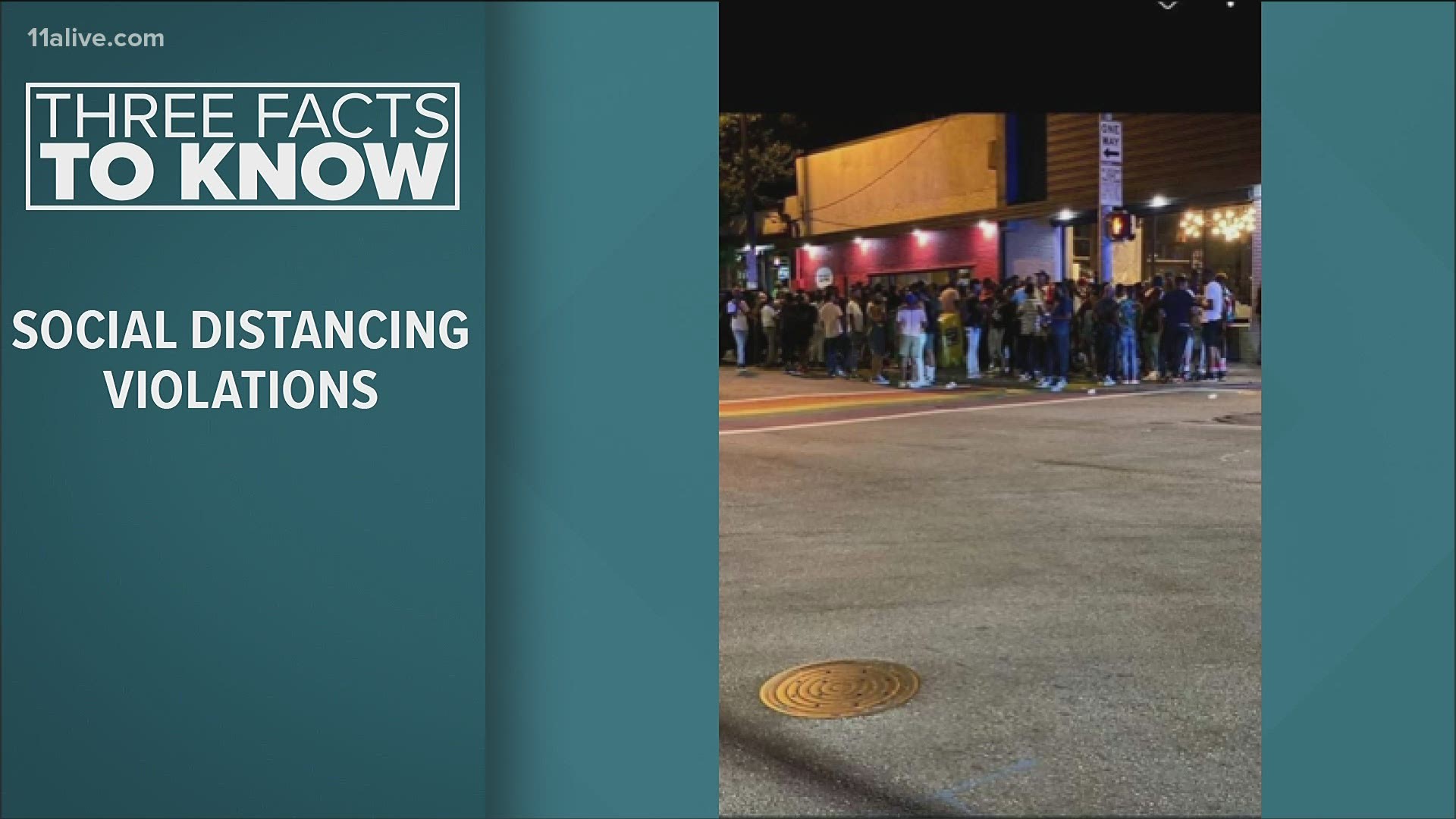 The crowds were so packed that it captured the attention of an 11Alive viewer, who sent in a photo of people waiting in line to get inside.

Inside the restaurant customers filled the space to capacity, dancing and ordering food and other specialty services, like hookah and bottle service.

The club had to shut down twice within 24 hours, according to an incident report from Georgia State Patrol, because the packed crowds were a major indicator that guidelines were not being followed, potentially causing a major health threat.

Credit: David Ploski
The crowds were so packed that it captured the attention of an 11Alive viewer David Ploski who sent in a photo of people waiting in line to get inside on May 23.

The guidelines for dine-in services, issued on April 27, specifically lay out a formula for allowing patrons, outlining that "for restaurants, no more than 10 patrons should be allowed in the facility per 500 square feet of public space. In calculating the total number of public space square feet, such calculation shall include waiting and bar areas, if any, but shall not include hallways, restrooms, and spaces closed to patrons."

According to the GSP report, the trooper responded the first time around 12:54 a.m. Sunday morning and reported the restaurant was "full of patrons shoulder-to-shoulder and I was unable to enter safely." The manager working at the time was issued a warning and the patrons were asked to leave.

But the report said GSP responded a second time Sunday night, around 11:30, this time, the visit resulted in a citation, since GSP had already responded.

Last month, he and “Snoop” used the business to help feed the homeless in Atlanta. After feeding the homeless, the staff drove around Metro-Atlanta to different low income and homeless areas and dropped off meals.

11Alive reached out to Dillard and 2Chainz about the allegedly violating the safety measures. Both have declined to comment.

Escobar wasn't the only restaurant that appeared to draw crowds over the holiday weekend. A video making the rounds on Instagram purportedly showed a crowd at a Ponce de Leon restaurant-and-lounge called Boogalou. It was a similar sight at restaurants and bars in the Edgewood Avenue district, too.

The crowds depicted on social media left Mayor Keisha Lance Bottoms "extremely disappointed," according to a spokesman, who added "she is encouraged by the vast majority of Atlantans who value their lives and the lives of others enough to practice social distancing and use some common sense."

He wasn't supposed to survive his first night. He just graduated high school with a parade