Local bar featured on list of best bars in America

Esquire, a popular lifestyle publication, featured Watchman’s located at Krog Street Market as one of 27 best bars in America. 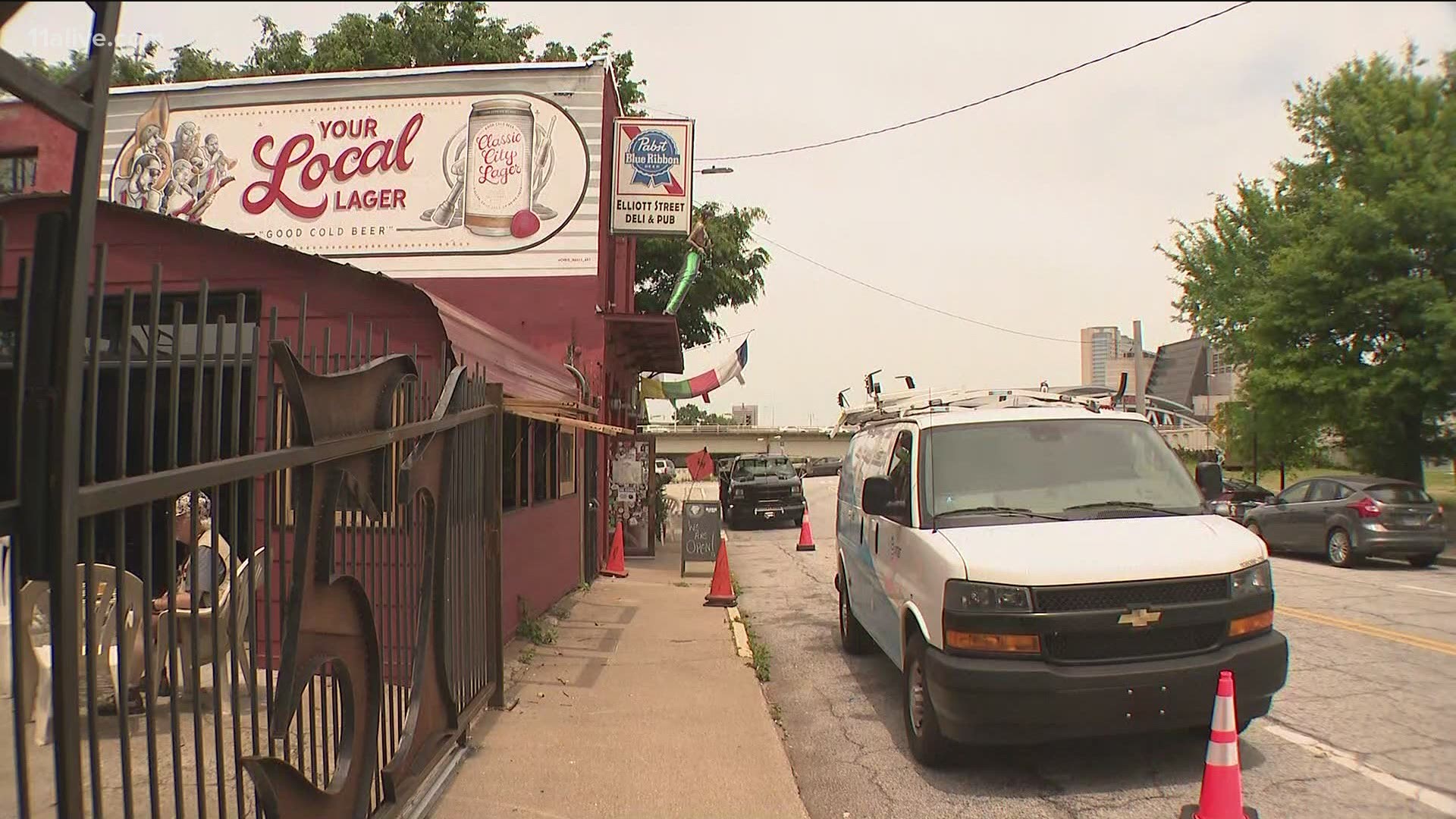 ATLANTA — A local bar is getting national acclaim as one of this year’s Best Bars in America, in a new feature from Esquire.

The popular lifestyle publication featured Watchman’s, located at Krog Street, as one of 27 inductees featured in the Summer Issue.

What does a place need to be on the “Best Bar” list after a year of lockdown? The answer, according to Culture and Lifestyle Director Kevin Sintumuang, is “simultaneously a place to be by oneself and a place of community. An escape and a home away from home.”

Sintumuang noted Watchman’s crafted drink menu and representation made it a stand out.

In April, for the first time in more than a year, Sintumuang had a drink inside an actual bar -- not on a sidewalk or on a Zoom call -- but an actual physical bar.

“This year’s Best Bars are a reflection of the desire to experience wonder once more – in being introduced to mind-expanding wines and whiskeys, downing pints in old churches, or hunkering in jazzy spaces again – and to be grateful for places that managed to remain intrinsic to the fabric of drinking culture in America," he noted.

Here are the 2021 Best Bars in America. (alphabetically by city)

FADENSONNEN: An elegantly rustic courtyard with a multilevel natural-wine, beer, and sake hangout built into an old carriage house by Lane Harlan and Matthew Pierce, purveyors of some of Charm City’s most interesting watering holes.

MINISTRY OF BREWING: Grab a cold one, have a seat at one of the beer-hall-style tables, and admire the paintings of saints beaming from the barrel-vaulted ceiling. What are you feeling? Perhaps it’s a greater power. Or maybe it’s just 9.9 Problems, the potent, 9.9 percent ABV stout.

LAZY BIRD: Hidden beneath the Hoxton Hotel, this place could win on moody, jazz-age seduction alone. But it’s the ambitious cocktails – 52 of them in a leather-bound book complete with ingredients and illustrations – that are the true draw.

COMFORT STATION: If you’re in the Walnut Hills neighborhood, the likelihood of you taking a chance on a women’s restroom door on the front of what used to be a public bathhouse is slim. But should you push through, you’ll find what feels like the city’s spiritual center.

TENDER MERCY: Enter through the subway stairway the bar convinced the city to let it burrow into the concrete. You’ll encounter a library, a vault turned drinking nook, a sprawling bar serving draft drinks, a wall of (tastefully) naked ladies, followed by a back- room cocktail den with a fireplace and a photo of Richard Gere smoldering against the booze bottles.

NOBLE RIOT: Whether you’re perusing one of the zine-like menus or being recommended pet-nat from Chile or pairing a big red from Palestine with a bucket of crunchy fried chicken, what you’ll discover is that wine can be wild and fun, even in the middle of craft-beer country.

THUNDERBOLT: An homage to the South, a nod to adjacent historic Filipinotown, and a lot of SoCal hangout vibes are what you get at Thunderbolt.

TROUBLE BAR: “Whiskey got me into trouble”—that’s the promise painted on the outside of Trouble, where the bar’s stocked with bottle after bottle of Kentucky booze and all that stuffy Bourbon Trail hero worship is dropped at the door.

Manchester, Vermont
THE CROOKED RAM: You probably don’t expect to find a Copenhagen-style beer and wine bar on a country road in Vermont. But this is the sort of place where the owners are wine-savvy enough to offer a Cviček from Slovenia on the by-the-glass menu, and attentive enough to serve it chilled, the way it’s supposed to be.

WHITE LIMOZEEN: Named for Dolly Parton’s 29th solo album, this place perches atop the roof of the Graduate Hotel like an outrageous wig. The décor—crystal chandeliers and an onyx wraparound bar—is matched by the cocktail menu: the frozen Aperol spritz, the magenta-hued Queen of the Rodeo, and Champagne Jell-O shots topped with Pop Rocks.

THE ELYSIAN BAR: The Church at St. Peter and Paul, the new hotel in the Marigny, welcomes new worshippers to the Elysian Bar, in what had been the rectory. The adjoining redbrick courtyard is perhaps the best place in the nation to sip an Aperol spritz at apertivo hour.

HUNKY DORY (Brooklyn): This corner spot in the Crown Heights hood is where you can start your day with coffee, get a martini garnished with pickled okra alongside a platter of oysters for a boozy lunch (because why not?), and gather with some friends for a cold-brew Irish-coffee pick-me-up in the evening.

67 ORANGE STREET (Harlem): This lively hangout has a timeworn vibe that makes it feel older than its age – owner/bartender Karl Franz Williams and his team have held court here since 2008, and the name is the address of one of the first Black-owned businesses in NYC, Almack’s Dance Hall, from the 1840s.

DOUBLE CHICKEN PLEASE (Lower East Side): DCP, which was originally a pop-up in a VW van that toured the country, make some of the most super-creative draft cocktails you’ll find, including the #6, which tastes as if a margarita met a Bloody Mary and had a shot of absinthe.

DECIBEL (East Village): Decibel is dungeon-dark and has been devoted to sake for over a quarter century. Whether your sake loyalties lie with honjozo or “I don’t know,” Decibel offers you a chance to remedy your fermented-rice ignorance or deepen your expertise.

VIRIDIAN: Viridian can feel like walking into a fuzzy dream. But it’s the way that some of the more soulful drinks, created by William Tsui, tap into the collective culinary consciousness of an Asian childhood that is the bar’s magic.

CON ALMA: If you want to immediately become the star of your very own film noir, walk within ten feet of Con Alma. You’ll hear jazz slinking out of the place before you even know which building is the club. Then—and this is the hard part—drink like you’re Humphrey frickin’ Bogart. That means an Old Cuban by the koi pond on the outdoor patio. Once your thoughts become jazz and the jazz becomes your thoughts, you’ll know you’re doing it right.

SCOTCH LODGE: You’ll find everything from rare Macallans to obscure, soul-heating bourbons. Scotch Lodge has a decidedly sophisticated yet unpretentious energy, impressive bites, and a cocktail list that is a master class in pushing what Scotch can do.

J & TONY’S DISCOUNT CURED MEATS AND NEGRONI WAREHOUSE: The house negroni is brightened up with some clarified lemon, Cynar slides into a next-level espresso martini. Cocktail-centric zaniness was never this low-key cool and delicious.

PHONE BOOTH: PBR is on tap, making that $10 PB+J(ameson) special that much more sweet. If this sounds similar to your neighborhood watering hole, that’s because that’s exactly what the Phone Booth, located in the Mission District, is; there are thousands like it across America, and yet there is none quite the same.

KONA’S STREET MARKET: The cocktails at KSM are inspired by street markets the world over. What does that translate to? A mezcal negroni mellowed out after four weeks in a clay pot, tamarind and date molasses melding with rye, and a martini made even more vibrant with skinos, a Greek liqueur reminiscent of pine sap.

ROQUETTE: Sometimes you just want to disappear into a moody drink. The cocktails here, like the place itself, tilt toward the brooding, with mezcals, overproof rums, and a multitude of French spirits – even the mai tai has cognac. But there are glimmers of levity: caviar with Bugles, anyone?

VAQUERO BAR: There might not be a more fun way to transition from a day of sipping merlots than a Smoke and Wine cocktail—think a cross between a sangria and a New York sour—and a mound of fried pig ears sprinkled with fancy Cheetos dust.

VALLEY BAR AND BOTTLE: Valley is part bottle shop, part restaurant, and part wine bar, with an emphasis on organic, small-production, low-intervention biodynamic wines from around the world. And the food is as California as it gets.

TIKI TNT: Just look for the smokestack along the Potomac that says, “Make Rum, Not War” and you’ll find raucous, Tiki-fueled times spread out among various airy levels at this bar that also houses a distillery from Todd Thrasher, one of the area’s OG cocktail mavens.

SERENATA: A showcase of Latin American spirits, the cocktails are incredibly complex, stunningly presented, yet as easy drinking as anything you would want on a tropical getaway.