Blackhall Studios CEO Ryan Milsap on Georgia politics & film: It factors in quite a bit

Pinewood Studios, Tyler Perry Studios, and Blackhall Studios are the industry heavyweights that are leading the film and television economy in Georgia. 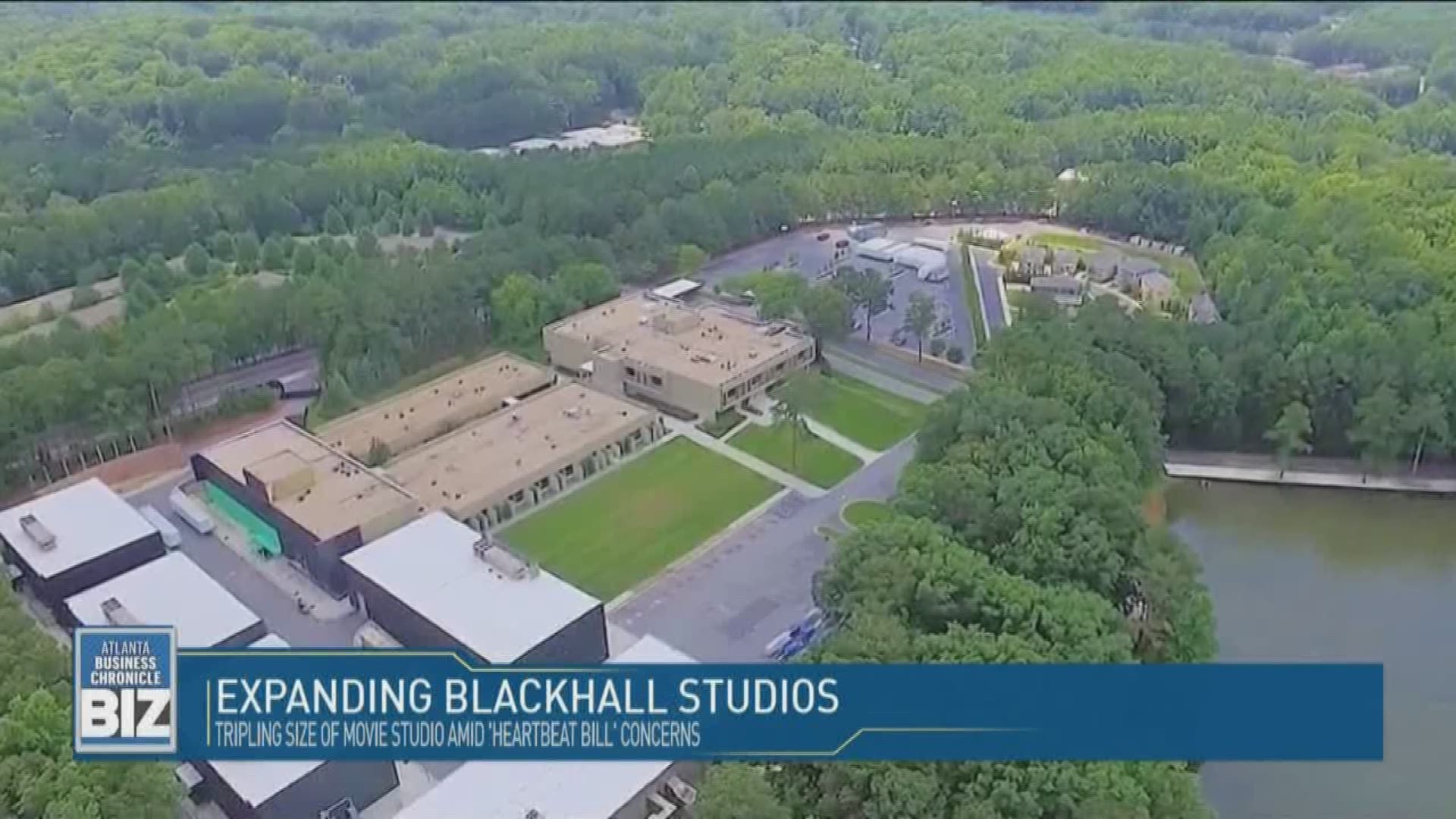 ATLANTA — The film industry in Georgia has not only broken records in the U.S., but it is currently one of the top locations in the world for production.

Toronto, Paris, London, and Los Angeles make up some of the top other locations for film, but Georgia's tax incentive for film production encourages even more opportunities for the state.

About 92,000 people in Georgia work in jobs with ties to the entertainment industry, as reported by the Georgia Department of Economic Development this year.

Pinewood Studios, Tyler Perry Studios, and Blackhall Studios are the industry heavyweights that are leading the film and television economy in Georgia.

Ryan Millsap, CEO of Blackhall Studios, is planning to triple the size of his existing sound stages – from 210,000 square feet to 600,000 square feet, which would make it the largest purpose-built movie studio in Georgia.

Millsap, who opened Blackhall Studios in the spring of 2017, has invested $75 million in the current facility, and he intends to spend another $150 million on its expansion. But that’s only a small part of the equation.

When Jungle Cruise was filmed at the studio, the crew built a 750-gallon water tank for their own use.Opportunities as that one his studio custom for any blockbuster in the making.

While discussing the competitive advantage of crews working in the United States, apart from other countries like the United Kingdom. Milsap, said aside from politics, employment infrastructure plays a huge role.

"This is a build it and they will come business. You never know what your true demand is until you have a product. They see it,"  Milsap said. "They love and they say wow. I want to use that.  In the time that we've been open, We've done multiple deals with Disney, multiple deals with Sony, multiple with Warner Bros. A big lease with Legend for Godzilla, Universal, a lease with HBO, a lease with FOX. I think I'm missing someone but you get the idea."

1 / 3
Ryan J Dennis
Milsap says while most of Hollywood productions including film and television shows are being developed in Los Angeles, more and more productions are choosing to manufacture in Georgia

“Georgia right now  has some ground to make up politically. The heartbeat bill has not had an injunction put against it.  It’s not going to go into effect that’s made our business more business as usual.  It to help you understand why this was a big deal to Hollywood is that if you and I, are Disney were Disney…we’re the board of Disney. All of us here. We’re the board of Disney, and if the board of Disney has to make $10 billion worth of content, and we have a choice where we make that,” Milsap said.

”And our three choices to make it for tax credit are Georgia, UK, and Canada. So those are the competitive markets. So where are we going to make this $10 billion worth of content. Well if Georgia passes a law, for us to make it more difficult to get the best directors, the best producers, best actors, actresses, best cinematographers, suddenly I have a supply chain issue," he explained.

"The production companies doesn’t necessarily care about the morally consequences one way or the other. They care about their supply chain and business. And when we pass laws that disrupt the supply chain, it makes us less competitive to London or Canada. And that’s really what happened."

Many in Hollywood have voiced their opinions concerning the "heartbeat" abortion law.

"When you hear of actors or actresses or directors speaking out, that’s them personally speaking out. Now though, they are independent contractors who get hired into a production. And if one of them says no, I don’t want to work in Georgia,  Well then that’s one less person that Disney can hire to make something in Georgia, which makes things more difficult because they can’t get their supply chain there. he said.

"It’s not making widgets with robots. This is something that requires highly skilled, highly creative people to be able to create the content itself, and so that wasn’t really where the issue was. It wasn’t so much of Hollywood trying to impose its values on Georgia. Frankly, Hollywood is an industry just like any other industry that has as many conservative people, as it has many liberal people. It has as many Republicans as it has Democrats -people all across the board," he added. "So, as a company, none of those guys are political. But as production companies, they have to go hire a whole bunch of individuals who get hired into productions by their own choice, and in their choice they may say I don’t want to work in Georgia, which is a lovely choice in being a free American I love it,  but it creates a problem to us in Georgia because now suddenly we’re less competitive to the U.K. and Canada. That, I don’t like.”

Milsap said he's concerned about how the state's on-going political issues continue to be a factor in the production studio. It makes him worry about the industry expanding in Georgia.

“I think that the biggest worry is that Georgia politicians understand the value of the entertainment industry. Understand that it is a nonpolitical set. There’s been things  where I’ve heard, 'well the entertainment industry is very liberal, it's going to vote very Democratic.' That is just not the case. Actually, you’ll find that a lot of these guys in here swing hammers that would be as far right  as you might find anywhere in the country," he explained.

"So I would take a hard stance against it being a liberal industry. There are liberals and there are Republicans. That being said, the biggest risk of expansion is that Georgia legislation would act in a way that would discourage the industry, and drive it into the UK and Canada."

He explained that this is not also the economic impact, its also the Halo effect.

"We all know that we have friends in other states. Everybody knows that Georgia where films are made, and people know they watching because by the end they are watching for that Georgia peach at the end. I know that I take pride in seeing that Georgia peach at the end of movies, and I know that a lot of people who aren’t even industry take pride in seeing it at the end of movies. Well they are not the only ones paying attention. People living all over the world are watching for the Georgia peach, and they know what Georgia is because of film. A lot of people don’t even know that Coca-Cola is from Georgia but everybody knows that English speaking movie, the Marvel movies come from Georgia. That kind of effect on our culture internationally is hard to measure, it is very valuable."

Milsap said while most of Hollywood productions including film and television shows are being developed in Los Angeles, more and more productions are choosing to manufacture in Georgia.

Milsap had a high regard when asked about Pinewood Studio president Dan Cathy.

This industry does not exist without Pinewood and Dan Cathy. I mean Dan Cathy just bought Pinewood London out. So now Dan owns 100 percent Dan is really the secret sauce that made all this happen, and then Tyler Perry is a genius. He’s a genius at production. He’s going to be a billionaire just by making content. So what he does on facility is an after thought where I’m just real estate. I’m going to make a lot less than Tyler. Tyler is a  generational special genius. We’re lucky to have Tyler in our state. He’s amazing for our brand."

Milsap, who is originally from California, says he talks to legislators all the time. He said the message that he tries to deliver to them all the time is that the film and television industry is not a political industry.

“These are people that have great jobs. They’re gonna vote for people who think they care about their jobs, and they’re not idealistic in a sense where they are gonna take a stand that is against their job," he explained. "So even if someone is more Democratic leaning or Republican leaning,  when it comes to who they are voting for. I bet 95 percent of the people in this industry vote for Nathan Deal because when he was the governor of Georgia, he was a huge advocate for the film industry, and that’s what they cared about.”

He also added that production industry is great for the citizens in Georgia because more jobs are being created.

“You not only have great jobs being created, but you also have all the jobs around this industry, and top of it you get the halo effect that is Georgia’s reputation internationally."