His mom said there are no odds that the help they needed was right there, in the moment they need it. 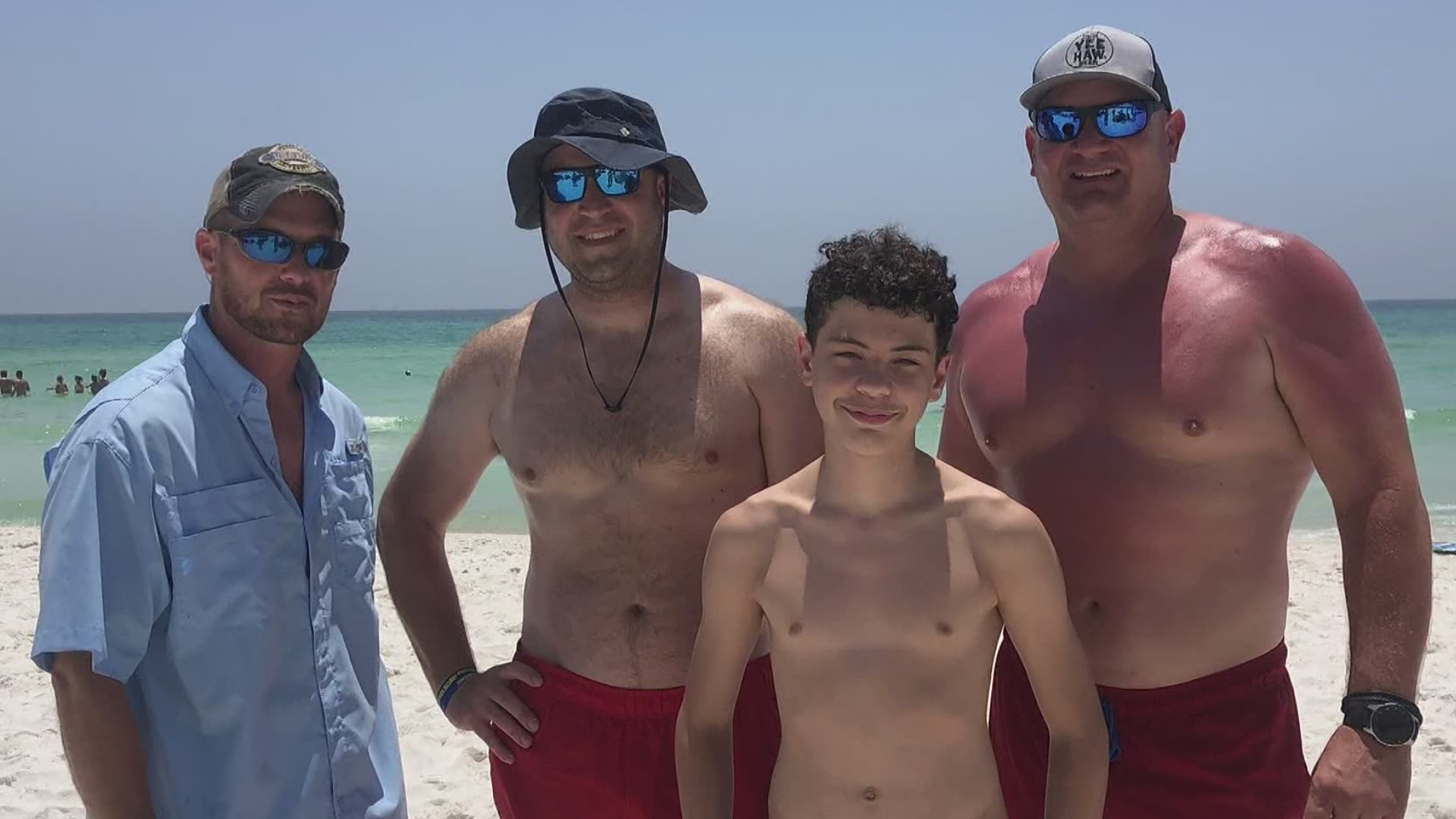 PANAMA CITY BEACH, Fla. — A mom in Carrollton said she cannot imagine what life would be today if her family hadn’t, randomly, been next to firefighters on their beach vacation.

Lisa Edison doesn’t believe it’s a coincidence they were all on that beach in Florida together. Because they helped saved her son.

“We are always looking out for anything that may happen,” explained Gainesville, Georgia firefighter Andrew Lathem. "'On-duty' is a constant mindset, no matter where you are."

Thirteen-year-old Hunter Madlock is grateful for that.

“I’m so thankful that they were looking out for me.”

She told 11Alive she and her family made the five-hour road trip to Panama City Beach, Florida. That's where the heart-sinking moment happened.

Lisa said the boys were swimming out to a sand bar, but Hunter didn’t realize he’d gone far beyond the second sand bar. Hunter’s 9-year-old brother Tristen knew they were in trouble.

'“I started waving my arms,” he recalled. “The waves were strong and kept pushing me down.”

The family saw the boys in trouble and called for help. They had no idea, in the tent next to them, were Gainesville firefighters, Andrew Lathem, Robby Buffington and their families.

“We were looking out in the water, and we noticed that this kid was a quarter of a mile away,” Lathem explained.

Buffington said he grabbed his child’s boogie board and instantly reacted.

“We made the decision to go out and get him,” he said, adding, “He was in way over his head.”

Another Good Samaritan named Jared Rogers, from Tennessee, was already in the water swimming towards Hunter. Rogers had helped pull another child out of the water, safely, the day before.

RELATED: Meet the Mystery Man: We now know who saved a drowning woman at St. Augustine Beach on Saturday

That's when the gravity of the situation sunk in for Lisa.

“I had the realization that my child’s life is in the hands of three strangers," she said.

Edison said her heart was pounding. She said a group of people gathered on the beach, watched with their hands over their mouths, praying, "please, Lord, let them get to this kid.”

Buffington admitted it was not easy to get to Hunter.

“It was a struggle to swim that far,” he said.

Lathem added that he knows they made the right decision to go in after him, because, “I really don’t think he would have been able to make it back to shore.”

But Hunter did make it back to shore because of those three strangers who always have an “on-duty” mindset. His mom said it’s a moment she’ll never forget or take for granted.

Lisa said she went to each of the men to say "thank you."

“You saved my son,” she remembered telling them. “We all sat on the beach and cried and hugged for a long time.”

Hunter said he, too, is thankful for their help.

“It could have killed me,” he said. “I feel very blessed that they saved me, and I am thankful.”

The group took a picture together. At that time, Lisa Edison didn’t know their names. She didn’t know they were firefighters from Georgia. She posted the picture on Facebook and the connection came from there.

She said there are no odds that the help they needed was right there, in the moment they need it.

This grandma received 100 roses for her 100th birthday