'When we picked them up we knew it was the right thing to do.' 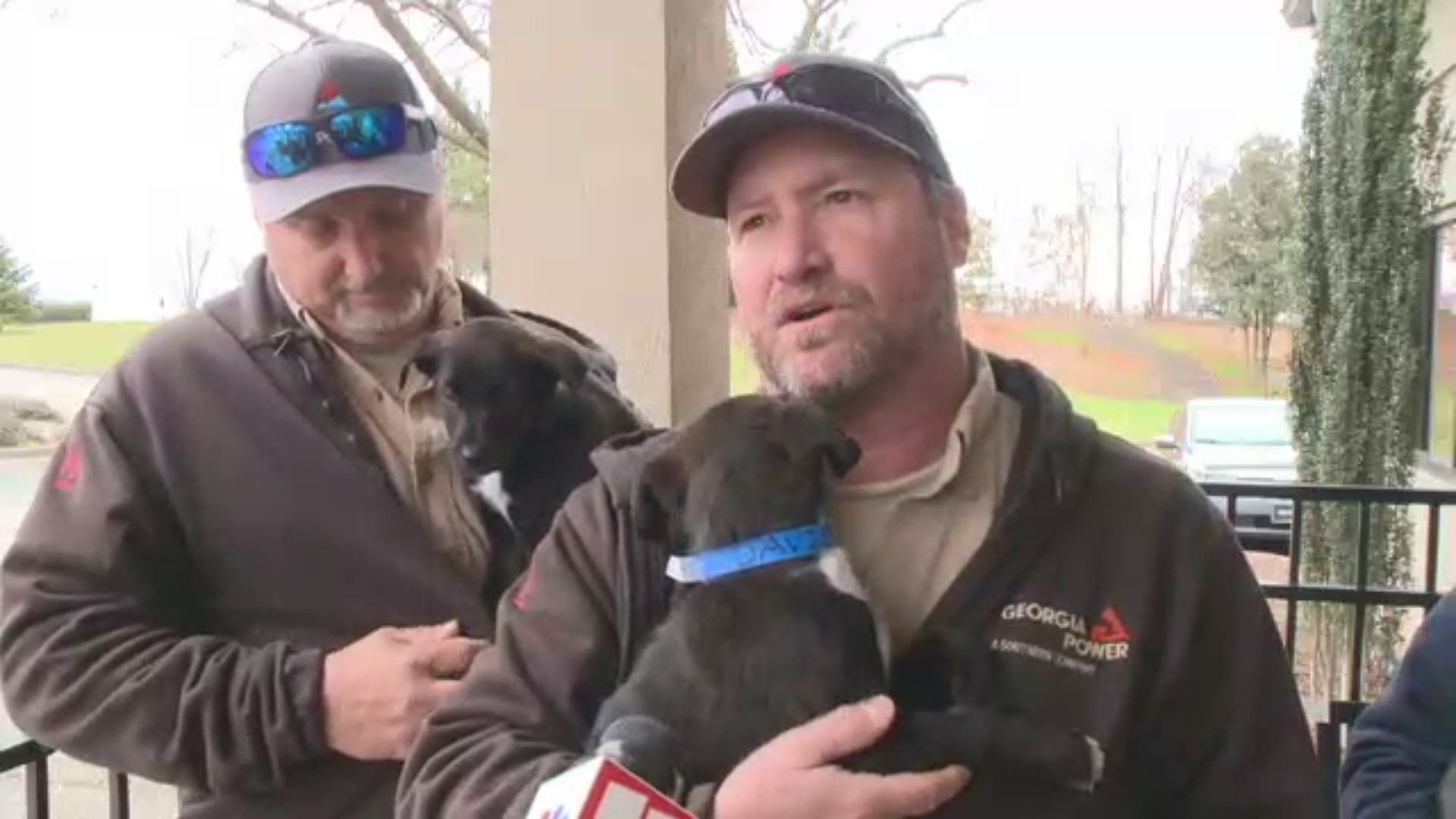 GAINESVILLE, Ga. — Three Georgia Power linemen happened to be at the right place at the right time on Tuesday to help with the rescue of three puppies that had been discarded in the trash.

Shane Porter, who works for the company, said he and the others were out on a job site when one of them had left behind some materials.

"David here was going to go back to the building to get some of the materials he needed and about the time he was getting to the truck, he noticed two of the puppies about to run out to the road by the pond over by the Gainesville municipal building," Porter said.

He said they started walking towards the two puppies but they were timid and scared. They decided to get a Slim Jim and tried to coax the puppies toward them.

“As I got my hands on this one a gentleman showed up behind us with this one in his hands wrapped up in a jacket and said he had just pulled all three of them out of the dumpster around the pond over there," Porter said while holding a puppy. "He could only get his hands around this one. Those two ran off.”

They were finally able to convince the last puppy with a can of Vienna sausages.

“We just put them in the cab of the truck and took them over to the Humane Society," Porter said.

The three puppies - two girls and a boy - fell asleep on the floorboard at the feet of one of the linemen, Porter added.

“When we picked them up, we knew it was the right thing to do," he said.

The Humane Society of Northeast Georgia posted photos on Facebook of the pups and the linemen who saved the day.

"They were covered in filth, their ribs protruding around their bloated bellies, and frightened beyond belief," the post reads.

11Alive spoke to the executive director of the organization, Julie Edwards, who said their team examined the dogs after they were dropped off.

“Right now, they seem to be healthy. Our vets have examined them -other than they’re very hungry and skinny and may have some intestinal parasites, some worms going on," she said. "But they could be available [for adoption] as early as this weekend but definitely within the next week, provided they don't develop any other medical issues.”

She hopes the puppies will get to go to a loving home soon.

As for their names, they have a sentimental meaning. One is named David after the lineman who spotted the puppies in the road. Another is named Jennifer, after his wife.

"And then the third puppy is named Georgia, for Georgia Power," Edwards said.

“I hope they’re lined up out the door when it gets time for them to be adopted," she said.

VERIFY: CDC did not recommend shaving beards to protect against coronavirus