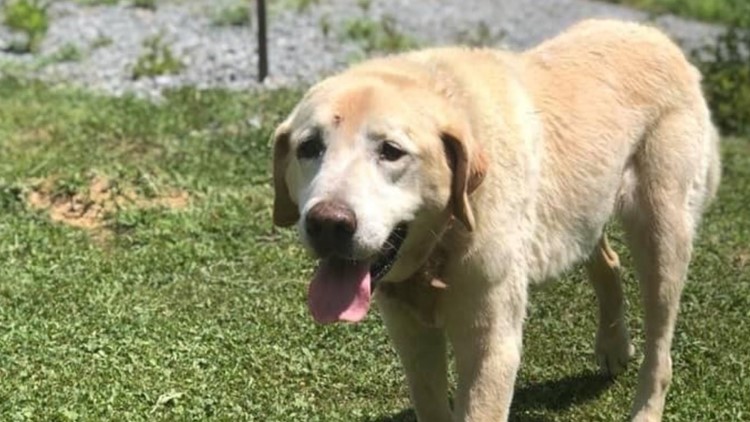 FANNIN COUNTY, Ga. — An 18-year-old dog was kidnapped in Blue Ridge - stolen right out of his yard in broad daylight. But the people who took him told police, they thought they were helping him.

It started off as a scenic train ride for a couple, visiting the area from Florida. But along the way, something caught their eye.

They said they saw Sam the dog, who they believed was abandoned and needed to be rescued.

So, they drove to the house of Gilmer County Deputy Michael Gobble and knocked on the door. When no one answered, they decided to take the dog and get him help.

Sam's family told 11Alive's K9Kait that they were panicked when they got home and realized Sam wasn't on his leash. The Gobble's were distraught, adding that Sam is losing his vision and takes daily medication for arthritis.

They said Sam loves being outside, and when they try to take him in, he whines at the door until they let him back out.

One of their neighbors caught the out-of-town-couple's car on their home security system, and that's when things get crazy.

Sam's family called police and were riding around town looking for the car.

They started calling veterinarian offices and found out the couple was actually trying to get Sam seen by a doctor, saying Sam was malnourished and abandoned.

Sam's family knew the general area they would be in and spotted the car. They called 911, and a patrol car pulled the vehicle over.

According to the police report, they first lied, then admitted to stealing Sam. They also showed cops video of them in the Gobble's yard.

They were arrested and spent the night in jail, because in Georgia, dogs are considered private property, and taking the dog would be considered theft.

In interviews with police, the couple was adamant that they were helping Sam.

The dog is back home with his family now, and the couple posted $2,000 bond.

What's your opinion on this story?