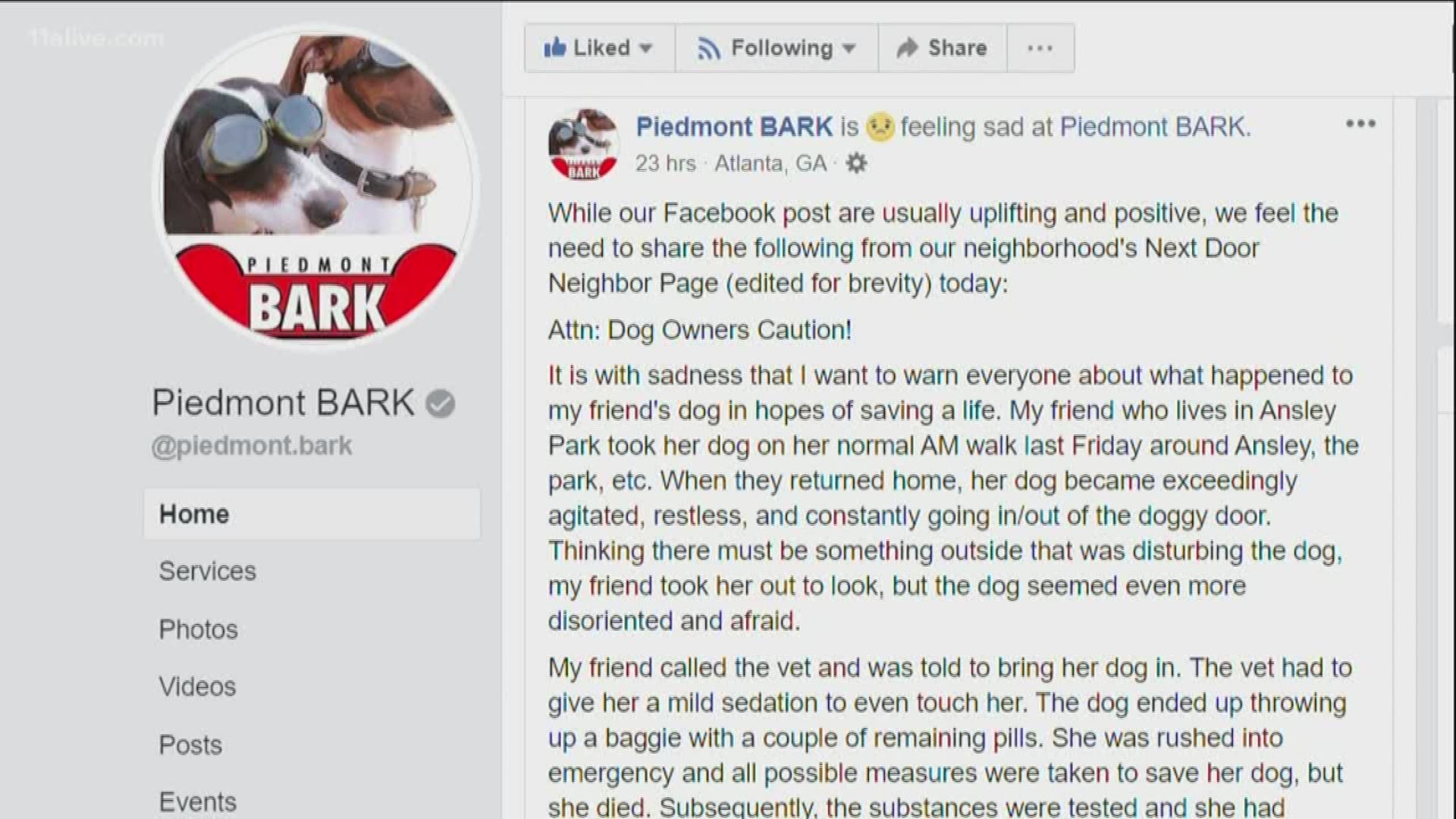 ATLANTA — Dog owners are on high alert after a neighborhood dog was killed after accidentally ingesting drugs.

A post shared on social media said one dog ate a baggie full of amphetamines during a morning walk in the park, and there was nothing the vet could do to save her.

11Alive's Kaitlyn Ross spoke with other pet owners at Piedmont Park dog park on Wednesday who said they were well aware of what happened and that they were all worried about it.

A post on the NextDoor website said it all happened so quickly and there was nothing the family could do to save their dog.

Natassja Jade said she knows how quickly things can go wrong, based on what has happened with her own dog, Hershey.

"She actually got into some wild mushrooms once," Jade said. "I was not paying attention to what she was doing -- maybe I was texting. And it was a pretty bad situation. I didn't know if she was going to live. So, I am conscious of what she is doing and what she's sniffing and what she's putting in her mouth."

"She's my best friend, so I have to take care of her," she said.

Jade said she has seen some suspicious things on the ground when walking Hershey in parks.

"Especially after a festival or something like that," she said.

That's what one family said happened to their dog just last week.

In a post shared by popular dog grooming page, Piedmont Bark, a family friend explained that their dog was acting "off" after their morning walk around the Ansley Park area and Piedmont Park.

According to the post, when they took the dog to the vet, she had to be sedated just for the veterinarian to touch her. They eventually found out the dog had swallowed a baggie full of amphetamines and oxycodone.

In the post, they said they did everything they could to try to save the dog, but she passed away.

Their warning is hitting home with dog owners.

Looking at the Atlanta Police Crime Map, there are dozens of reported narcotics crimes surrounding the park in the last month alone.

Jade said you never know what might be left on the ground.

"You can control what you do, but you have no control over what other people do, or what kind of debris or paraphernalia is laying around. It's just important to pay attention to them," she said.

In the post on the Piedmont Bark page, the family urges everyone to be vigilant when they are out walking their pets -- especially in high traffic areas, like Piedmont Park.

Cyclist hits puppy on Boise's Greenbelt, then rides off