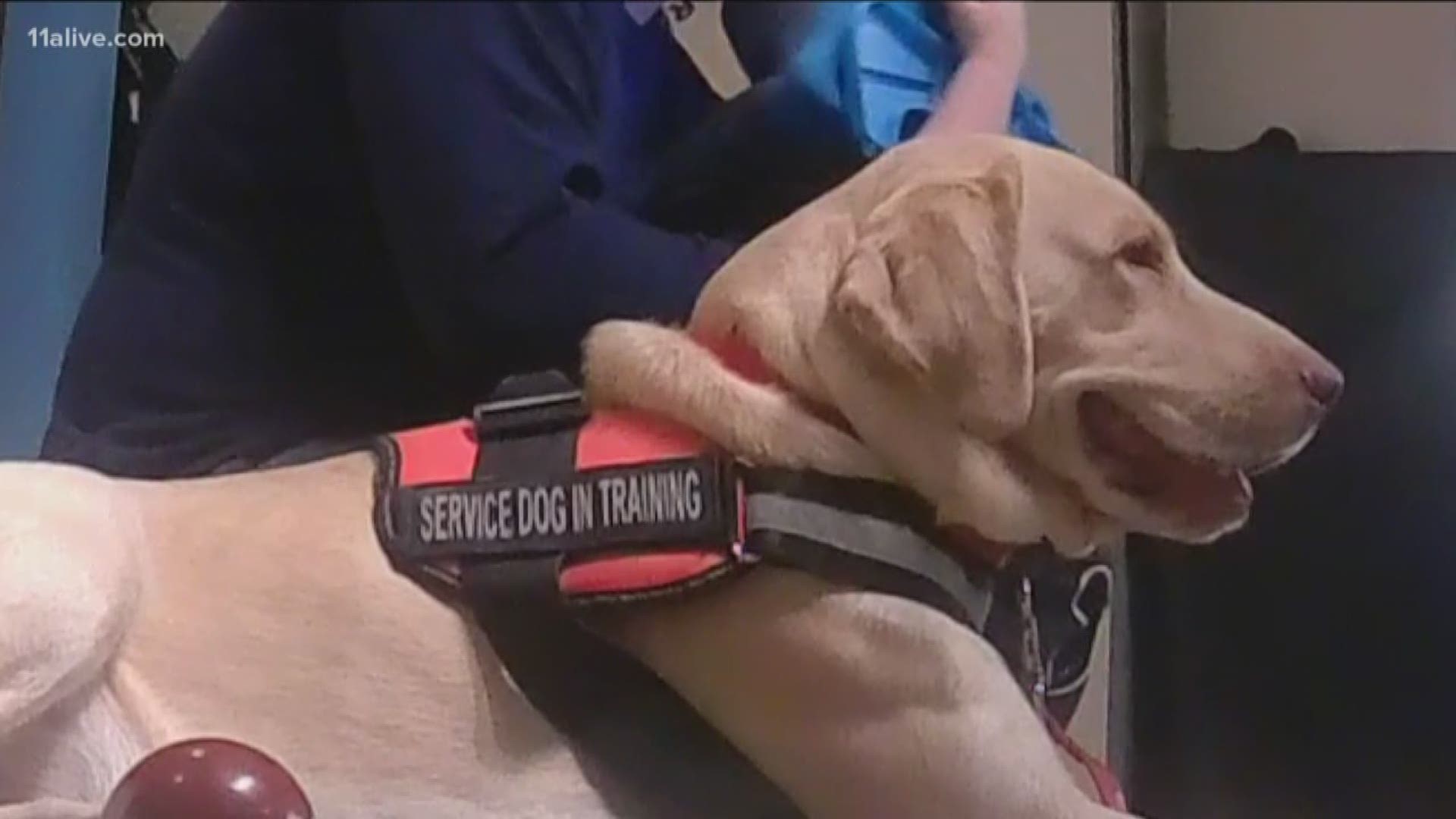 ATLANTA — They are saving each other.

A unique program in Georgia pairs veterans suffering from PTSD with rescue dogs - training them up to be service animals for our service members.

But now, they're taking on a new challenge. For her digital project K9Kait, 11Alive's Kaitlyn Ross looked at how one company is now helping a young boy with autism

"He's my boy and I'll do whatever it takes to take care of him. If it means getting him a dog, I'm all for it," explained Coy Rakestraw.

His 5-year-old son Bentley is autistic and nonverbal, and Coy worries what his life will be like.

"I'm afraid he won't ever have a girlfriend. Or get go out on a date. Or go to the prom," he said.

He can't do any of those things for Bentley. But this - this he can do.

Bentley's is autistic and has a sensory disorder. His mom Kathryn explained that he doesn't show emotion, but when he met River, one of Ranger Dog Training rescue dogs, something was immediately different.

"He was laying his face on her fur, he was laying on her, and petting her. It was crazy," Kathryn explained. "We were both amazed at the bond the two of them shared. She laid right on the floor where he was playing, and he would look up from what he was doing and tap her or love on her. I was in tears. Because I had never seem him show emotion like that."

She says the whole family is already attached to River.

"Everybody loves River," Coy told Kenneth Cappello. "Thank God we found this man right here. And surely you have no idea how much we appreciate everything you've done."

Cappello had his own service dog, so he knows how important they are. He started training the rescue dogs to help veterans, because he said they are both worth saving.

"Our mission is, we save two lives at once," Cappello explained. "We save the veteran. And we are taking homeless dogs from rescue groups, shelters."

Cappello donates the dogs to the veterans - and now to Bentley.

Cappello volunteers to train the dogs and doesn't get paid, but it's not cheap. It costs about $6,000 to train the dogs, money he tries to raise himself. But Cappello said it's always worth it.

"If we didn't have River, we would always find another dog. But River is perfect. If I could get every dog like River it would be a piece of cake," he joked. "The two of them (River and Bentley) are meant to be a pair."

Right now, Bentley can only go out in public in a modified stroller because he runs away and it's dangerous. Once River is trained, however, the two of them will be attached on a harness, so River can keep Bentley safe. She'll also be trained to calm him down and comfort him.

Bentley needs River. And his family will do anything to get her for him.

"It's totally different, but I wouldn't have it any other way," Coy said. "I love him more than he'll ever know. Yeah, I think it's going to be good."

They've already started raising money to get River trained. If anyone wants to donate, they can at the Ranger Dog Training website.

12-year-old makes wheelchair for disabled dog out of LEGOs