The dog, Duncan, lost 30 pounds during the seven weeks he was in the trainer’s care. 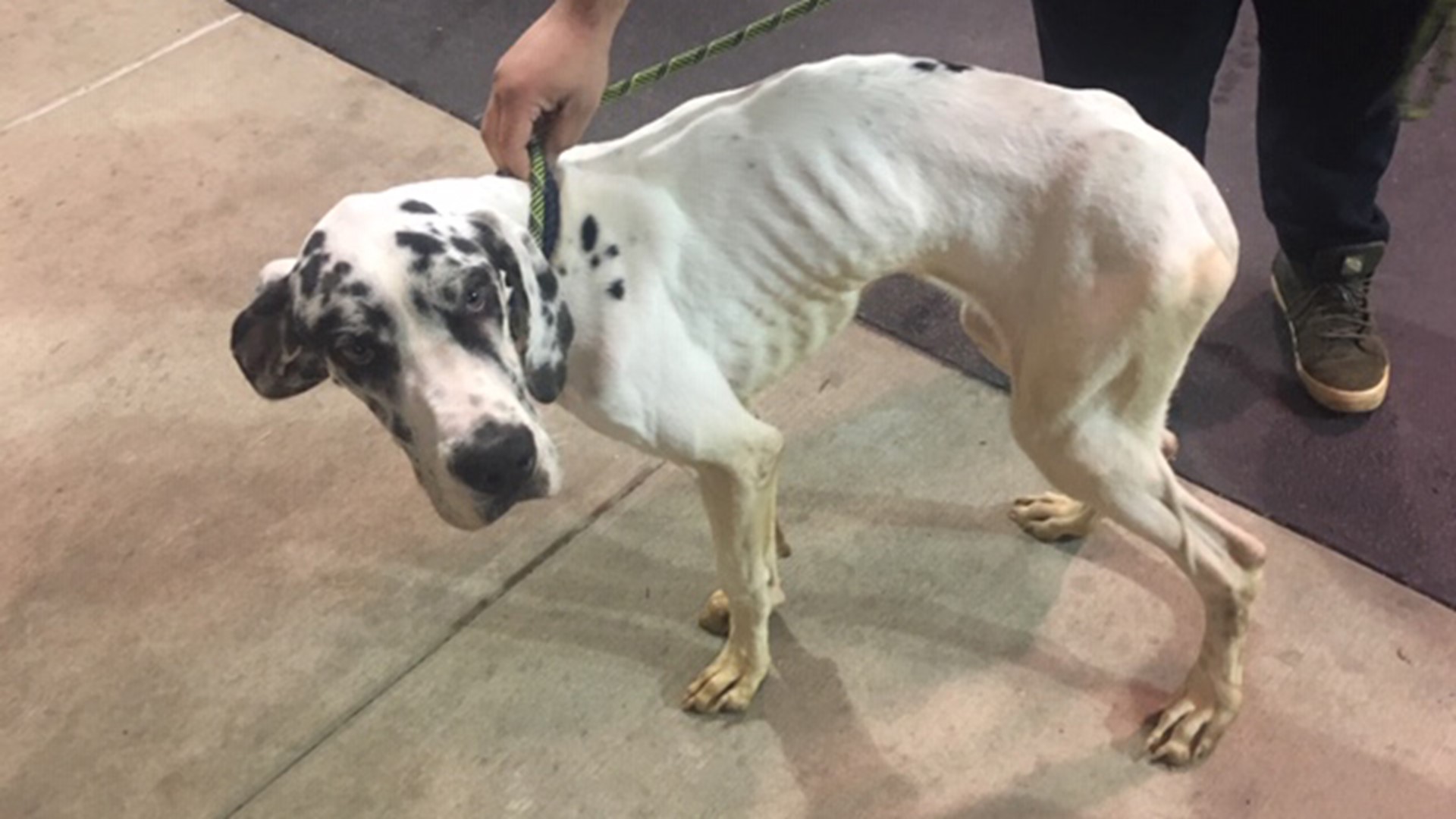 DALTON, Ga. — Update: The dog trainer mentioned in this story was found dead by suicide on February 7, 2019.

A dog is in terrible shape and barely able to stand after his owner said a trusted trainer starved him – and she fears that if she hadn’t intervened, her dog might have died.

Duncan, a Great Dane, lost 30 pounds during the seven weeks he was in the care of Stephen Kinder, the owner of Kinder Care near Cleveland, Tennessee, according to the dog's owner, Abigail Eastburn.

She said she did a ton of research before sending her dog to stay with the trainer and was worried the whole time Duncan was at Kinder’s facility.

“I called numerous times that week, it was all hunky dorey, nothing was wrong,” Eastburn said. “I was already on edge, freaking out. I’m asking for pictures, nothing’s happening. After that, they asked to keep (Duncan) for another 10 days. I said, absolutely not. I’m going to pick him up.”

Eastburn met Kinder in Dalton, Georgia on Sunday to get Duncan back. When she picked him up, she said she wasn’t sure if he would survive.

“He was unable to walk, he was emaciated, malnourished and hadn’t eaten in days … I actually collapsed on the ground and was just crying my eyes out,” Eastburn said. “We called the police and I did not say anything to them until police arrived. I was not able to. I was so distraught and couldn’t believe this happened.”

Credit: Abigail Eastburn
TOP: Duncan before going to Kinder Care, a dog training facility in Tennessee. BOTTOM: Duncan after returning from the facility, appearing to be nearly starved to death.

Kinder has been charged with four counts of animal cruelty for how they found Duncan.

Eastburn said Duncan was “fat and happy” when she dropped him off for the 4-week obedience class in mid-December. At the time, he weighed 90 pounds. Now, he weighs 65 pounds.

“He was a chunky fat monkey when I dropped him off,” Eastburn said. “There’s no way to describe the full extent … he doesn’t have a voice of his own … my boyfriend took his belt off and he bit him. There’s no way to know what he went through, but now he’s home.”

Four other dog owners have filed criminal complaints against Kinder, including one owner who filed a civil lawsuit in Catoosa County. Eastburn said the abuse her dog suffered is unfathomable. 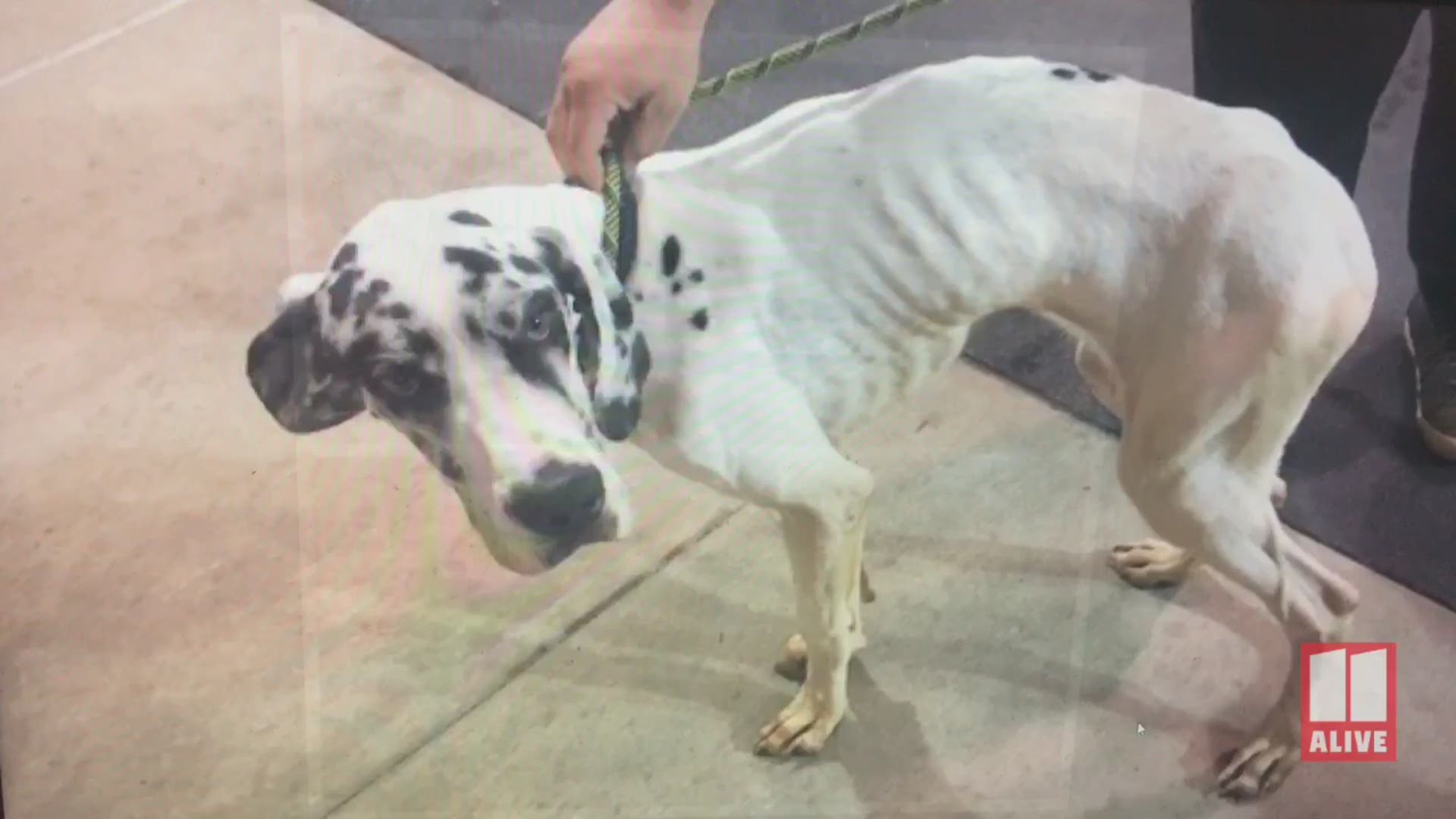 “He’s stained yellow from laying in his own feces and urine. I have bathed him so many times, I cannot get the smell to come out of his hair. His tail is down to a nub from wagging it in a small crate for so long.”

Kinder did not return 11Alive’s requests for comment, but told NBC in Chattanooga on Tuesday that he is innocent.

“I’m not happy with the condition of the dog as well. The owner did not provide enough food,” Kinder said. “But, I did provide some of our food for him.”

Kinder said that since Eastburn posted about her ordeal on Facebook, he’s been receiving death threats.

Eastburn said that she hasn’t said any of those things – in fact, she has nothing to say to him at all.

“There’s no excuse. There’s no reason,” she said.

On Wednesday, Eastburn decided to take action. She registered a non-profit to help others in her position. She said she believes that Georgia’s animal cruelty laws are too lax, and she wants to strengthen them to help protect other dogs, like Duncan.

1 / 5
Abigail Eastburn
Duncan, a Great Dane, was returned to his owner nearly starved to death after he was in the care of a dog trainer in Tennessee. Stephen Kinder, the dog trainer, is now facing four counts of animal cruelty in Dalton.