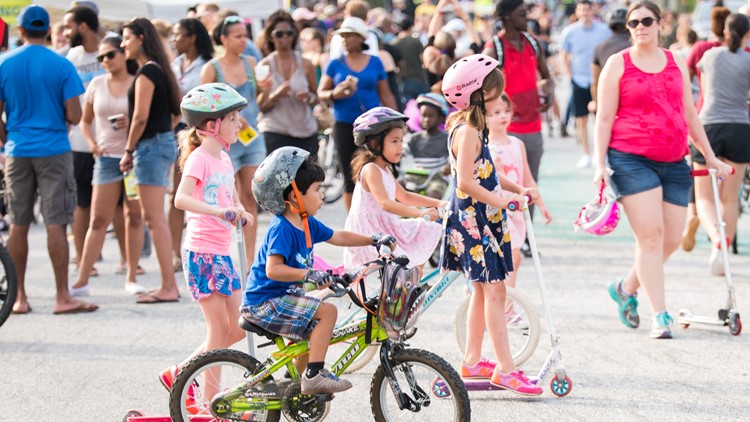 Some of Atlanta’s busiest streets will be temporarily closed for Atlanta Streets Alive: Cross City

ATLANTA -- Some of Atlanta’s busiest streets will be temporarily closed for cars on June 9 for an event put on by the Atlanta Bicycle Coalition.

Atlanta Streets Alive has been going on since May 2010. This year, the event is moving to greater lengths, literally. It is the longest route they have ever done, stretching for almost 10 miles.

Atlanta Streets Alive will stretch from DeKalb Ave. and Decatur St. all the way to Marietta Street and Howell Mill Road.

Haydée Santana, the deputy director at the Atlanta Bicycle Coalition, told 11 Alive they are uncertain how many people will come out this year because of the weather forecast and because this is the first year they have combined the usual two routes into one.

For this event, cars are taken completely out of the equation for bikers and walkers to enjoy the city.

The official website for Atlanta Streets Alive said this event has the mission to build demand for streets to serve all people, promote a healthy lifestyle, celebrate the unique character and community spirit of Atlanta neighborhoods and reclaim public streets for the people.

The roads being temporarily closed on Sunday for six hours brings questions about traffic for some.

Santana said with this being the ninth year they have done this event; it has become widely accepted as part of Atlanta’s culture so over the years fewer people are concerned about the traffic.

She said MARTA bus routes have been rerouted and over 130 off-duty Atlanta police officers are working the event. The officers will be throughout the route and at the intersections where cars will be allowed to pass.

Atlanta Streets Alive has no vendors, but rather pushes for the businesses that are along to route to extend their storefronts for more accessibility to the people participating IN the event.

Santana said this is what distinguishes Atlanta Streets Alive as an initiative over a festival.