Georgia has seen hospitalizations increase rapidly over the last two weeks. Grady Health is preparing for influx of patients. 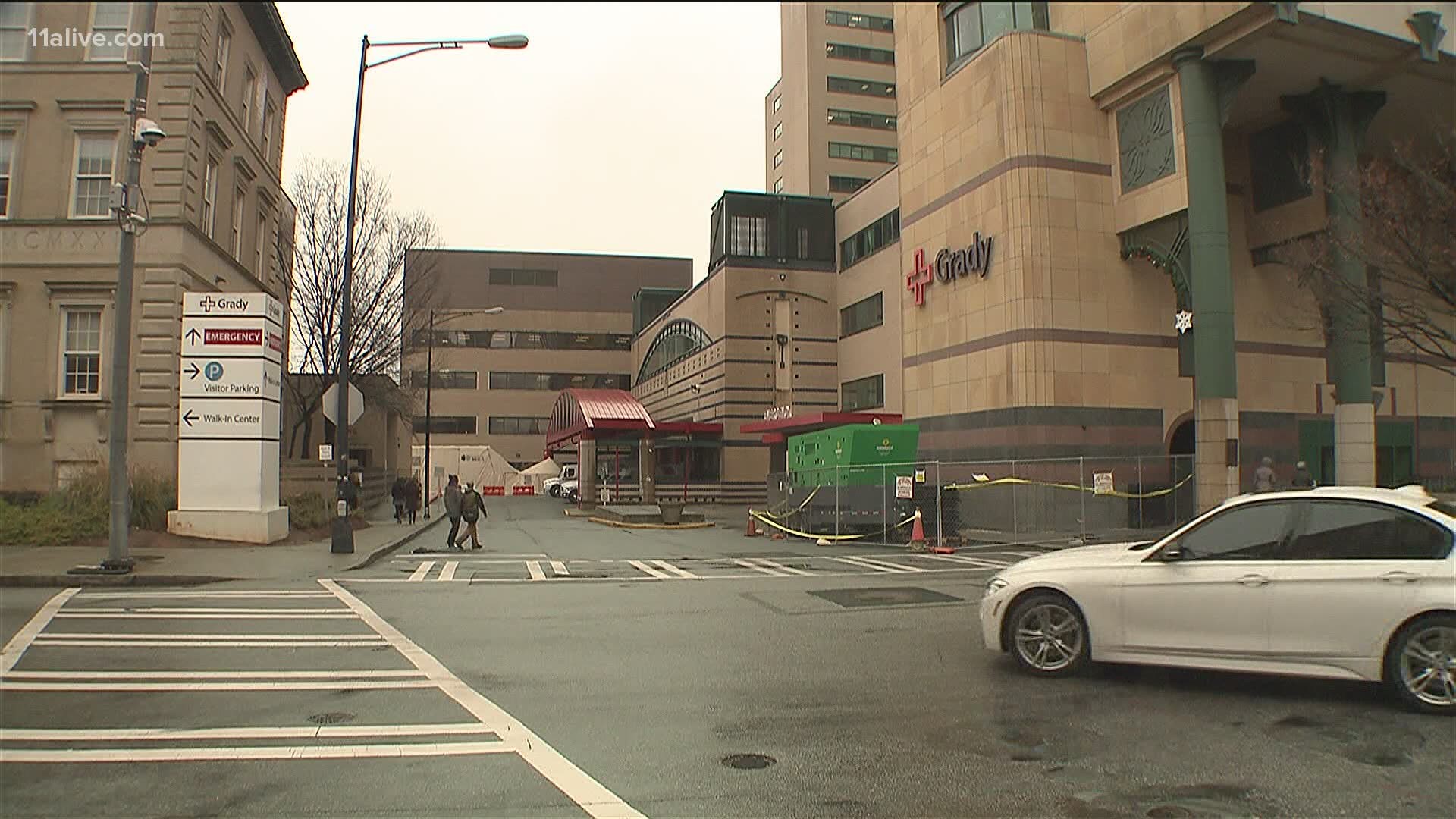 ATLANTA — Hospitals are bracing for what health officials think will the the busiest season yet, as the flu season is approaching while COVID-19 cases and hospitalizations rise.

"We are reaching a point where that is going to become a problem again, just like it was in the summer where we ran out of capacity to take care of patients and we had to cancel elective procedures," he said.

According to the Department of Public Health, Georgia has seen hospitalizations increase rapidly over the last two weeks, up by more than 27%. However, they are still 41% below the worst point, back in April.

Dr. Jansen said his hospital has a plan in place to keep as many beds as possible available for critical care.

"We're doing everything we can to maximize our capacity - being able to discharge patients as quickly as possible when they're ready to go home, preventing admissions if we're able to treat people as outpatients," he explained.

This is a concern throughout the state. As of Wednesday, Whitfield County had 11% of its intensive care unit beds available. Hall County had 8%. Cobb and Cherokee counties had even less - 6%. Fulton, Gwinnett and DeKalb combined had 18% of their capacity free.

Currently, there's not only a rise in COVID-19 patients. Hospitals are experiencing an increase in patients with other medical reasons.

According to Dr. Jansen, Grady Health is currently seeing approximately double the number of trauma cases from what they saw last year. Some, he said, due to the rise in gun violence.

He said they have a plan in place if they start to run out of bed space.

"We look at alternative sites within the hospitals, places you don't normally use for patient care," he said.

In addition to the concern about bed space is a shortage in healthcare workers, particularly nurses.

"That's been an ongoing shortage for years and has just now intensified with the increasing demand," Dr. Jansen added. "We've been dependent on using contract nurses, and when we're doing that, we're in competition with every other system. If it gets worse, that competition intensifies."

Also, the risk of workers getting sick, whether by COVID-19 or another illness, adds to the concern about shortages.

"We're all nervous about what happens when our healthcare workers get sick," she said. "They're unable to care for the ill when that happens, and its important for us to remember with all this talk about hospital beds that it's not the bed that matters, but the people who support that bed."

Dr. Schmidtke said the increase in the currently hospitalized patient population is especially prevalent in the northern half of Georgia.

"Some of those areas have seen a gradual rise overtime, some of them are seeing what seems like exponential rises and that need for those beds," she said. "The risk is when we start to run out of ICU beds - that means there's less ability to cope with incoming needs for those beds ... things like heart attack, stroke, car accidents."

In addition to staff shortages and concern about bed space, there's also an increase in prices of medical supplies.

"It's disappointing, quite candidly," said Dr. Jansen. "You hate to see that right now. I know it's a supply and demand issue and everybody needs the supplies."

Although Grady is currently not running short on any medical supplies because they've been stockpiling on PPE and other supplies, in the past, Piedmont Healthcare has stepped up to help.

"In that particular case, we ran short of supplies for testing for COVID-19 and Piedmont was able to give us some extra supplies to help us get through this crisis time," he added. "That was invaluable to us. We have been extremely fortunate. We've been lucky because hospitals in Atlanta have cooperated with one another throughout this pandemic: sharing information, sharing best practices."

While health officials hope the vaccine will provide long-awaited relief, they know it'll take several months until they see dramatic improvements in how cases and hospitalizations are going.

"Right now, in the northern half of the state where we're seeing a lot of that hospital demand pick up, it's a mix of non-rural and rural counties so it's important that it's affecting all sorts of populations," said Dr. Schmidtke. "When it comes to something like deaths, we are seeing a disproportionate impact for rural counties. Part of that has to do with access to care before the pandemic even and how that impacts their general state of health."