"This bottle contains the ashes of my son, Brian, who suddenly and unexpectedly passed on March 9, 2019. I'm sending him on one last adventure." 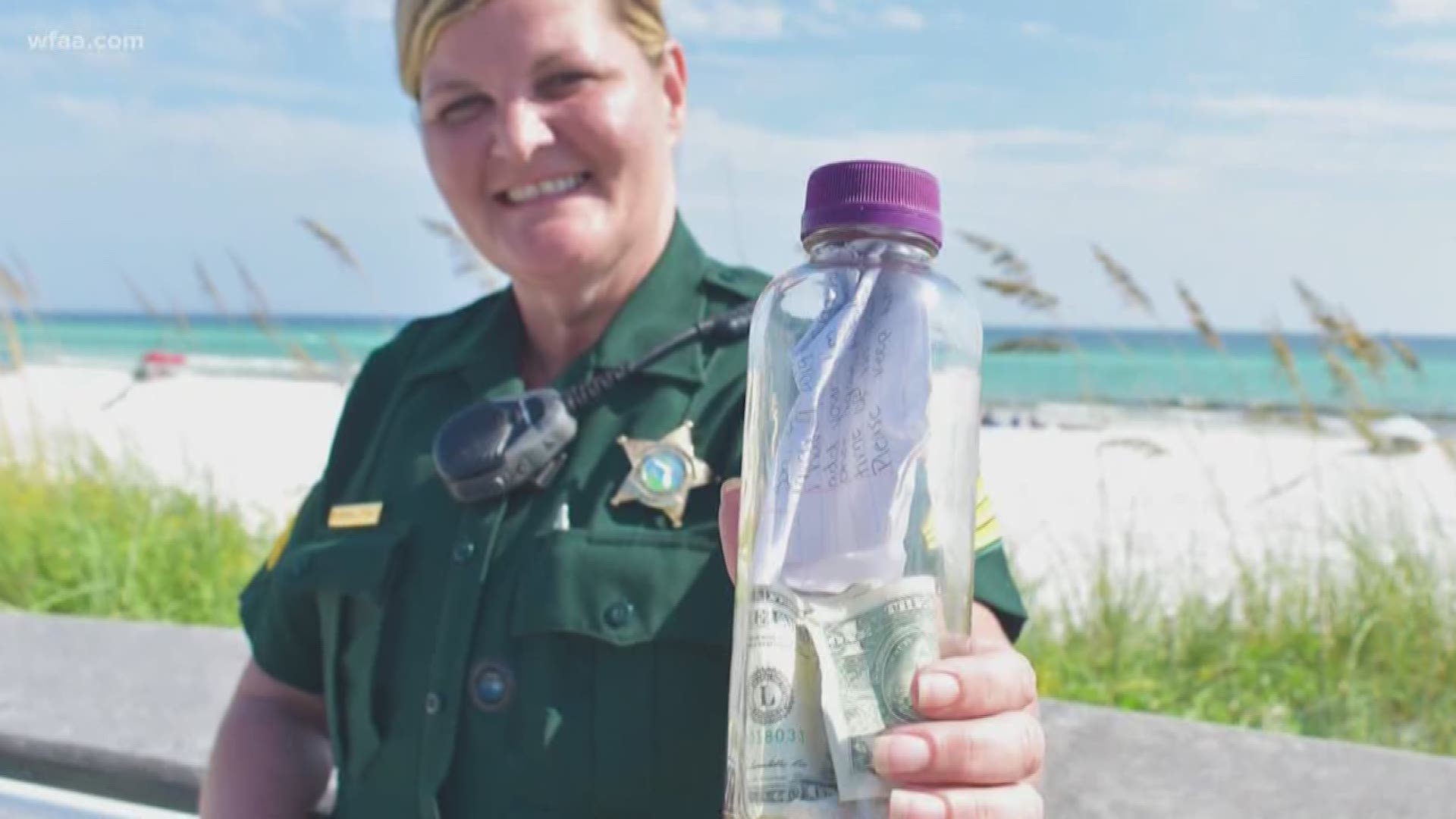 DALLAS — A message in a bottle was set adrift in the Gulf of Mexico and found its way to a white sandy beach on the Florida panhandle.

That bottle and its contents has now brought complete strangers together in a friendship bound by shared grief and a resolve to keep the memories of those lost alive.

Sealed tight with a purple plastic cap, the clear bottle held a note with two messages, a few dollars, and what turned out to be a small amount of human ashes.

Walton County Sheriff's Office Sgt. Paula Pendleton got a hold of the bottle when she answered a call from someone who found it on the beach.

Pendleton said the bottle remained unopened inside her patrol car as she answered several important calls. When she finally had the chance to stop, open the bottle and read the letters inside, tears filled her eyes.

"This bottle contains the ashes of my son, Brian, who suddenly and unexpectedly passed on March 9, 2019. I'm sending him on one last adventure," said the first message, written by a Darlene Mullins from Garland, Texas.

"Hi, my name is Peyton," the second note read. "I am Brian's daughter. When my father passed, I was 14-years-old. It has struck our whole family pretty hard and, so far, it has been a very hard road. But, like my granny said, he loved to be free. So, that's exactly what we are doing."

"We just wanted him to be free. Because that was his whole thing. He wanted to travel the world. He wanted to be everywhere," Peyton told WFAA of her father who died from a sudden heart attack just five days after his 39th birthday.

So the bottle, thrown into the Gulf near Destin, Fla. and found just days later near Grayton Beach State Park, contained some of Brian Mullins' ashes, the two notes with a phone number, and a few dollars to cover the cost of a phone call for anyone who found it. The notes asked whoever found it to contact Peyton and her grandmother so that they could know where Brian's ashes had traveled.

"Being a daddy's girl my whole life, he's my best friend," Peyton said. "I want what's best for him even though he can't tell me what that is."

By the time someone found the bottle on a beach in Walton County, Fla., it hadn't traveled very far at all. But it was soon obvious it had landed in the hands of the right person.

Pendleton is no stranger to the same grief. She lost her husband, Bill Pendleton, to a sudden illness in 2018. And she told WFAA she felt compelled to help the family from North Texas who was enduring the same pain.

She contacted Peyton and her grandmother and promised to help keep her dad's journey, and Peyton's wish, alive.

"And I thank you very much for making me bawl and cry in my patrol car," she joked in a conversation with Peyton via Skype in the WFAA newsroom Friday afternoon.

Pendleton let Peyton and her grandmother know that on Friday she added her own note to the bottle and gave it to a charter boat captain who took it far out into the gulf so that the journey could continue.

"I just wanted to fulfill what y'all had requested," she told Peyton. "And if there is anything more I can do with that, you please let me know."

"I said it in a text multiple times, but thank you," Peyton said.

"You're welcome, sweetheart," Pendleton answered as she also offered to remain in contact with the teen to help her navigate life without her father.

"There's someone that doesn't know me but cares," said Peyton of the gift of a stranger whom she can now call a friend. "It felt really good."

What also feels good for this 14-year-old is that thousands are now following her dad's journey on Facebook: first from a popular post shared on the Walton County Sheriff's Facebook page and now on Peyton's own page called Brian's Journey.

"I want to keep him alive. And if I can't do that physically I'm going to do everything I can," she said. "And that's what I'm doing. I want his story to be known, completely."

And thanks to a kind-hearted stranger, the story and journey of Brian Mullins has only just begun.

RELATED: A group of North Texas senior citizens take 'back to school' pics and go viral

RELATED: She gave birth to 3 of her own grandchildren so her daughter could be a mom