'Why are you making such a fuss': Family celebrates woman's 100th birthday

Big surprise parties are not for everyone, and when you're going against the wishes of a 100-year-old, you celebrate at your own risk. 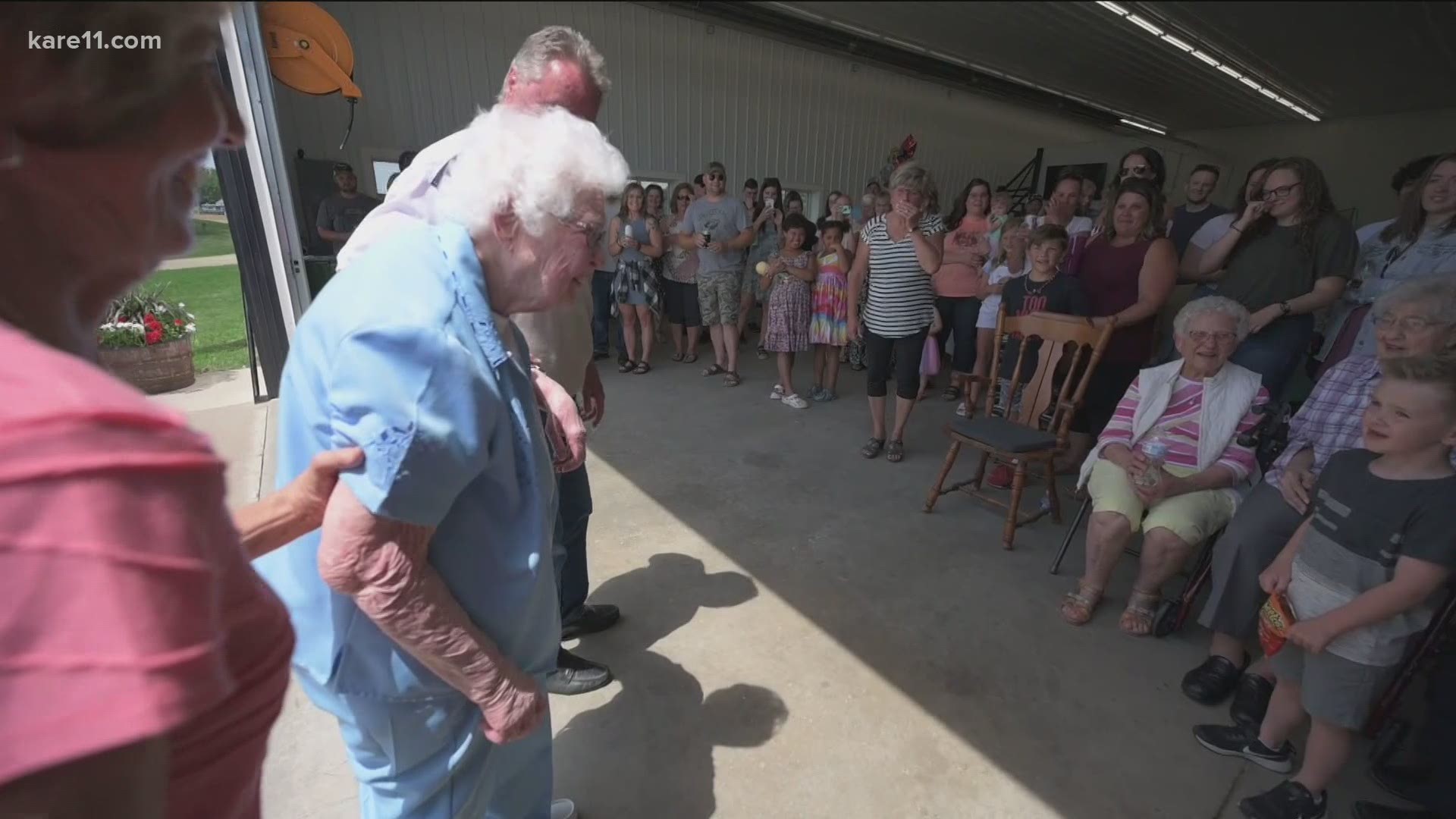 DAKOTA COUNTY, Minn. — Big surprise parties are not for everyone.

And when you're going against the wishes of 100-year-old Louise Kimmes, you celebrate at your own risk.

"Don't scare her," one family member says to a large crowd of family. "You know how that is. She's going to be mad at all of you, but not us."

Son Jerry Kimmes says, "Well she doesn't like parties so I kind of wish you wouldn't have asked me to wear this thing. Let somebody else take the bullet, but somebody has got to do it, right?"

Besides, as the oldest of four kids, Jerry has been surprising his mom for 73 years.

And it's only gotten slightly easier.

"Happy Birthday grandma!" one of the family members yells out.

"What a bunch of liars," Louise Kimmes chuckles, as two family members flanking her on either side usher her to her chair to sit amongst throngs of children, grandchildren, friends and family.

"She always says, why are you making such a fuss?" says a family member.

"Do you feel the love?" another asks of Louise.

"Are you still mad?" the family member asks in follow up.

"Just be mad at your kids. Not your grandkids, okay," the family member implores.

Technically, she could also blame her sisters.

All four were part of the planning, including Susie, Helen, Emma and Tillie – all in their 90s.

Except when it comes to parties.

"Yeah, I don't think she was quite aware of this," Tillie laughs.

But they do appreciate each other's company.

That's what happens when you grow up with 11 siblings.

"Six brothers," Jerry says. "They're all passed away, and one older sister that's passed away."

Thankfully, these four all survived the pandemic, and the isolation that came with it.

"Oh yeah. Yeah, it was hard. Very hard," Tillie says, recalling the nearly last year and a half.

But they say it was Louise who inspired them to keep going.

"Oh yeah...she's a busy body. She's busy all the time," sister Emma says. "She's got a big garden, she cans, everything."

"She's a workaholic," sister Helen concurs. "Believe it or not, she drives in to my house, to Hastings."

Yes, you heard that right. Louise does still drive on occasion.

And it you're wondering whether hitting 100 will slow her down? Well...

"I haven't got time to die," Louise says.

She is too busy sewing quilts and diapers for the Catholic church.

And with a newly signed 100th Birthday blessing from the Pope himself, her family decided to also plan a parade fit for a Pope.

One by one, extended family and friends drove by in their vehicles.

Making plenty of "fuss" in the process.

"It's too much birthday," Louise says.

"It's fun because we haven't had a good one like this for a long time," says one teary-eyed family member embracing the warmth of the moment following a long pandemic. "It's good. A blessing."

This blessing may not have been co-signed by his holiness, but it was written on every smiling face.

Louise began to embrace this blessing, too.

"That's the most birthday I ever celebrated in my whole life," Louise says.

No matter how unwelcome it was.

"I suppose I better thank them. Otherwise I don't know what to say," she says. "Just tell them don't let it happen again."