Firefighters from Norfolk and Portsmouth raised their ladders to the fifth floor of CHKD and surprised four-year-old Nolan Turner who has a rare form of lymphoma. 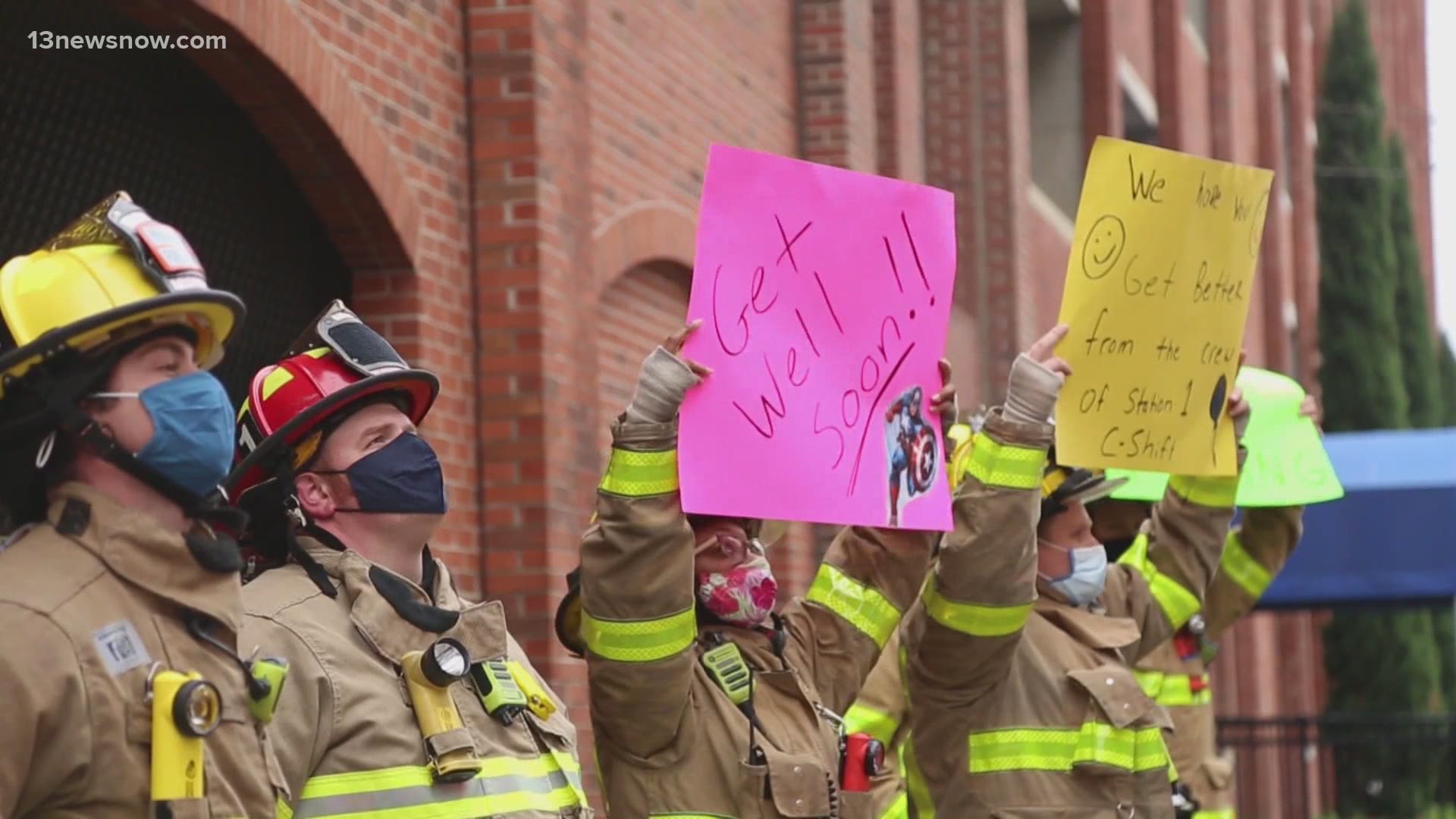 NORFOLK, Va. — Fire trucks lined up outside of the Children’s Hospital of the King’s Daughters in Norfolk Friday morning for a special surprise.

Their engines roared and lights flashed as firefighters with Norfolk Fire and Rescue as well as Portsmouth Fire Rescue & Emergency Services Rescue came together to bring some cheer to a young boy named Nolan.

The four-year-old boy is their colleague’s son. Nolan was diagnosed with a rare form of lymphoma in September 2019.

Levin Turner, Nolan’s dad, has been a firefighter in Portsmouth for 14 years. He said his colleagues came together during a time when his family needed it most.

“COVID has made this whole process difficult, you can only have a limited amount of visitors so only mom and dad can come see him. It’s nice to see different faces and nice to see the amount of support and all the people who really care about Nolan,” said Turner.

His colleagues at the two fire departments showed up in a big way. They raised their ladders and climbed up to Nolan’s hospital room window on the fifth floor to surprise him with special signs. Captain America even showed up.

They held up messages of hope from up high and down below. It was their way of lifting the boy's spirits.

Nolan waved and smiled from ear to ear.

“I have five kids and he’s the one who wants to be a firefighter, that’s his thing. It was so meaningful in so many ways,” said Turner. “There’s not a whole lot in this process that has brought the joy back to Nolan, this is about it. This has been a very high point for us. So, it was really appreciated."

Nolan’s dad teared up, saying it felt good to see his four-year-old son return to his happy self.

“No kid should have to go through that. I got two boys of my own, I would hope somebody would do the same for mine,” said Sergi. “Even if it was just for 15 or 20 minutes, he didn’t think about his hospital room treatments, the nurses coming in, and if it was just a few minutes out of his day to get a little bit of an escape, then that’s a win for us."

Turner said that’s what family is about.

“I’ve been in the department for 14 years and they’ve always talked about a brotherhood and a family. Since I’ve been through this, I’ve never felt more than a family unit. It’s been truly amazing,” said Turner.

Coincidentally, in the room next to Nolan, was 15-year-old Jordyn Lee. Lee’s father is a captain with the Chesapeake Fire Department. Lee was diagnosed with renal medullary carcinoma in August, and she also received a surprise visit from both fire departments Friday.

The group of firefighters let Nolan and Jordyn known they’re not fighting alone, they have a big family looking out for them.