'We are one people and one family,' Lewis said of the LGBTQ community. 'We all live in the same house.' 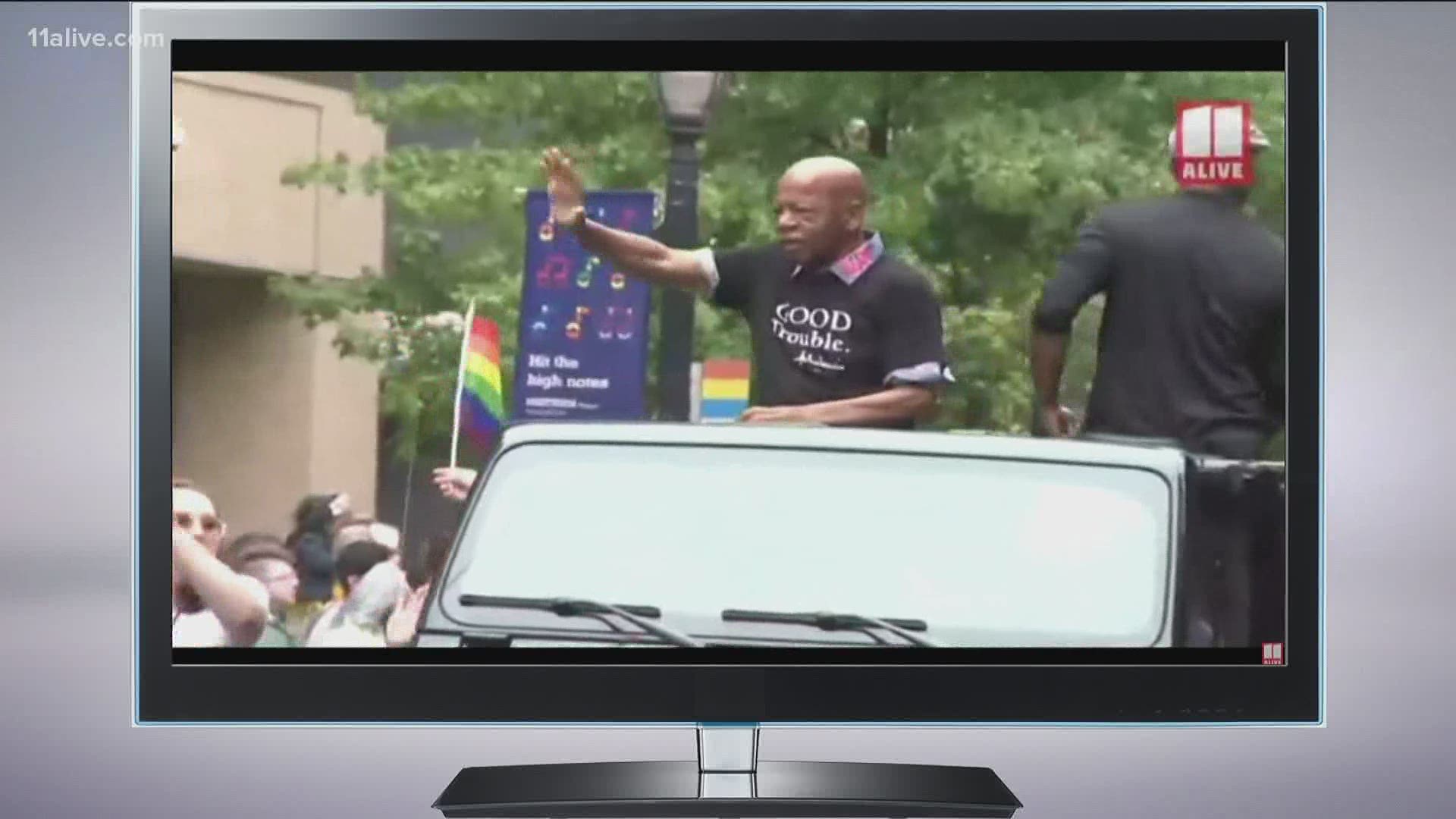 ATLANTA — John Lewis was best known for his work for civil rights for people of color. But there’s another community mourning his loss, and reflecting on his work towards equality for all.

During his career on Capitol Hill, Lewis co-sponsored more than a dozen bills to advance and protect rights for the LGBTQ community.

"It is a real loss, not just for Atlanta, not just for the world, but specifically for the LGBT community as well,” said Jeff Graham, member of Mayor Keisha Lance Bottoms’ LGBTQ advisory board.

On Wednesday, as the Willie Watkins Funeral Home hearse carrying Lewis’s body drove from Hartsfield Jackson International Airport to the Georgia State Capitol, it made a purposeful stop at 10th and Piedmont.

The “rainbow crosswalks” at that intersection are an unofficial nod of appreciation to Atlanta’s LGBTQ residents. As Lewis’s body passed through the intersection one last time, dozens gathered on the sidewalk to say their goodbyes to the 5th Congressional District representative.

In 1996, Rep. Lewis famously spoke out against the Defense of Marriage Act on the floor of the U.S. House – at a time when, according to a Pew Research poll, 65 percent of the country opposed same-sex marriage.

“This bill is a slap in the face of the Declaration of Independence,” Lewis said in his speech from the House floor at the time. “It denies gay men and women the right to liberty and the pursuit of happiness. Marriage is a basic human right.”

“So many of us, unfortunately, especially those of us here in the South, grew up in families that rejected us," Graham said. "John Lewis knew of that, and he specifically would speak about the sense of belonging, the sense that he had fought for social justice so that he could be fighting for us. And for many of us it was the first time that someone of his stature had ever acknowledged our humanity.”

1 / 24
AP
A military honor guard moves with the casket of Rep. John Lewis at the state capital, Wednesday, July 29, 2020, in Atlanta. Lewis, who carried the struggle against racial discrimination from Southern battlegrounds of the 1960s to the halls of Congress, died Friday, July 17, 2020. (AP Photo/John Bazemore, Pool)

“It may be hard for people to realize in 2020 what that meant,” Graham said. “But I guarantee you in the early 1990s, it was such a relief -- that someone of his stature, an icon of the African American Civil Rights movement, would actually care about us and our movement for equality, civil and human rights as well."

Lewis was also a regular attendee of Atlanta’s Pride parade since its inception. Just last year, right before the congressman was diagnosed stage 4 pancreatic cancer, Lewis showed up for his local LGBTQ community.

"We are one people and one family," Lewis told 11Alive at the time. "We all live in the same house."

"He was constantly at events, constantly meeting with people, hearing the concerns,” Graham said. “Listening to what we as individuals were concerned about and then taking action to make sure that we were included in the American dream and the American community as well."

As he was dying, John Lewis wrote this final message to America

Obama, eulogizing John Lewis, says he'll be a 'founding father' of the better America to come