The significance behind each stop of Rep. Lewis' final motorcade through Atlanta

Each stop along the procession - his last through the district he represented - a reminder of how wide his reach has been. 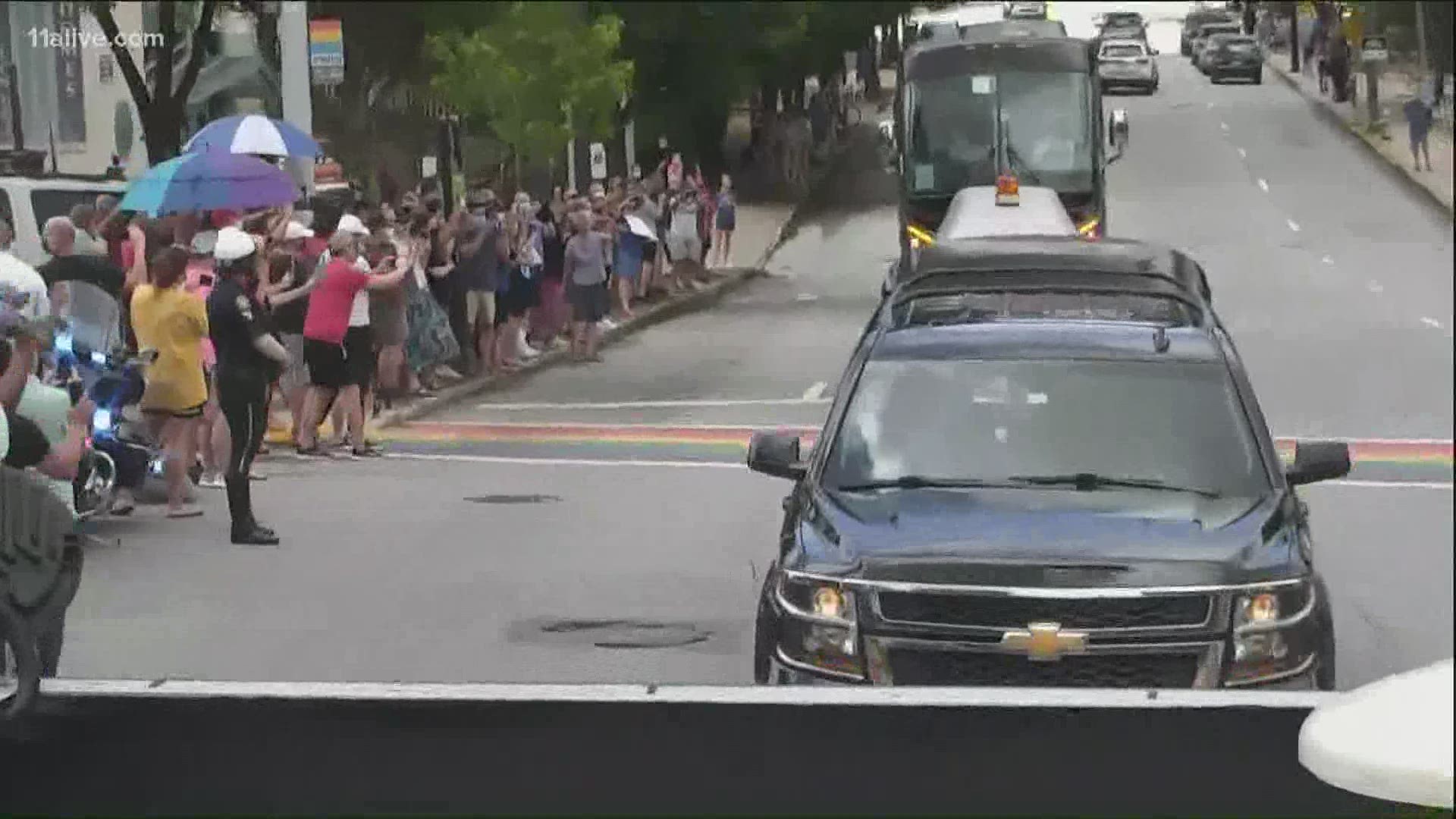 ATLANTA — The Thursday procession of Congressman John Lewis from Dobbins Air Reserve Base to the state capitol was a map of the ways the civil rights hero made his mark on Atlanta.

It brought him to to John Lewis Freedom Parkway. To his mural bearing the title "Hero." To the house where Dr. Martin Luther King, Jr., his close partner in the fight for civil rights, was born. Even to his long-time district office where he worked to serve our state in Congress for more than 30 years.

Each stop along the procession - his last through the district he represented - a reminder of how wide his reach has been.

The late Congressman represented Georgia's 5th District from 1987 until his death. It was a place where he could be found often, meeting with those people he represented.

With John Lewis leading the motorcade, his family and congressional staff followed close behind, as people lined the streets to pay their respects.

Many, like Eddie Grant, have their story of receiving wisdom from Lewis.

"I'm a member of the 100 Black Men of Atlanta. The congressman is the man who we've actually stood on his shoulders many times and he provided us a lot of guidance," he explained.

The processional crossed over John Lewis Freedom Parkway, and paused at the rainbow crosswalks of 10th and Peachtree streets. Tears after Lewis fought for civil rights, he supported same-sex marriage in Congress, as the fight for equal rights continued.

She met Lewis several years ago at the airport. She recalled how she yelled his name; the congressman stopped for this picture and a conversation. A small gesture - leaving a big impact.

"It is a monumental picture, and I will always keep it as a remembrance to just keep loving on him," she said.

And at the iconic John Lewis "Hero" mural at the corner of Auburn Avenue and Jesse Hill Junior Drive - a place now serving as a public memorial to his life - the motorcade came to a pause. His family could be seen behind tinted glass waving from their buses.

1 / 17
Stephen BoissyWXIA
Memorials line the ground below Atlanta's most prominent tribute to Rep. John Lewis - a massive mural on the side of a midrise building.

Michael Wooten skipped work to stand by the mural Thursday. He met Lewis a few years ago outside of a Home Depot.

Continuing on, the processional passed the Equitable building, the home of Lewis' Congressional field office for many years.

Finally, he reached the capitol to lie in state.

Lewis' time representing the 5th District is now over, but his impact here will remain.

"Very sad that we lost such a light, but on the other hand, he stressed that we must continue. Continue to get in 'good trouble.'"