'Just humbled': Weeks before John Lewis died, he sent a thank you letter to an artist for this special portrait

Four years ago, Carl Hess finished a painting of the Civil Rights icon, but it didn't reach Lewis' hands until a couple of months ago. 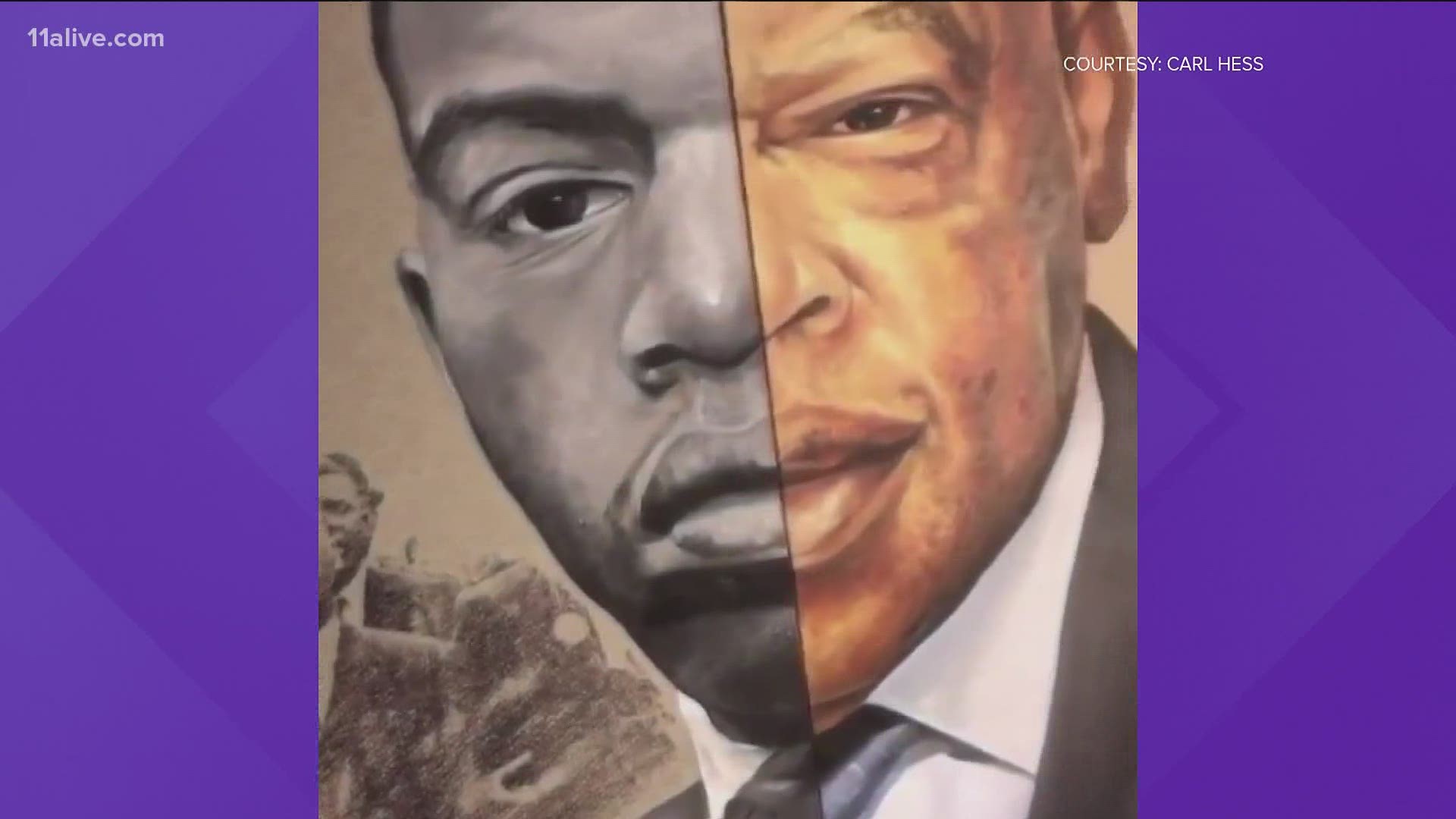 ATLANTA — A picture is worth a thousand words and the imagery painted in one portrait of Rep. John Lewis depicts two different historical moments in his life.

“I actually came up with the idea from inspiration from a movie named Selma," said Carl Hess, a realism portrait artist from Tennessee.

Four years ago, Hess finished a painting of the Civil Rights icon, but it didn't land into Lewis' possession until a couple of months ago.

“He inspired me greatly, so I used the inspiration that I was most relatable to, which was the youth and pushing forward and being such a powerful young person as he was," Hess said.

Hess generally paints formal portraits that are straight on, but this one was different.

"It's an older technique called the acetone transfer," he explained. "And in addition to my realism portrait painting, I really wanted to captivate something completely different from what I traditionally do."

On the left, you see the young Lewis linked with Dr. Martin Luther King Jr. and, on the right side, you see an older Lewis, joining arms with former President Barack Obama. Both images depict historical moments across the Edmund Pettus Bridge.

"It’s just phenomenal that the opportunity for him to cross paths with two great leaders, I really wanted to capture that," Hess said.

He told 11Alive in an interview on Monday that he had years of communication with Lewis' office trying to get the portrait to him, but the chips never fell into place. However, in May, Lewis finally received the portrait that Hess said moved him immensely.

“I received a phone call and his staff in Atlanta was just overzealous with excitement. ‘Hey, he just saw the painting,'" Hess said.

He said Lewis' staff told him that the Congressman wanted to know more about his craft and it was on his mind during his flight back to Washington D.C.

"I was really just humbled, you know," Hess said. "It’s very seldom that I get that type of response from my art, again, I’m a traditional portrait artist; so, when I can get that type of reaction out of my subjects, I know for sure I was fulfilled, my doings were fulfilled.”

Over the weekend, after hearing the news that Lewis died, Hess made an Instagram post about the painting and included a letter he received from Lewis earlier this month, thanking him for the painting.

RELATED: John Lewis took his 'Good Trouble' to Washington during 33 years in Congress

"Dear Carl," the letter starts out from Lewis. "I would like to extend my deepest thanks for the amazing painting. I was immediately impressed with detail and profound accuracy of this piece. I must admit, that I have seen a lot of paintings of me over the years and yours stood out and is simply stunning."

"When I received the letter, I was very, very grateful because I know he’s a busy man on top of the challenges that he was dealing with his health. So I saw it more than just a letter," he said.

"I thought about the fact: to sit down and - that level in life - and to actually create a letter of appreciation, it is huge and I did not take that for granted," he added.

It's not the first time that Hess has done artwork of notable figures.

He's done paintings for T.D. Jakes and the official portraits for two mayors in Knoxville, Tennessee.

"The first time I met President Barack Obama it was in a rainy day on a whim and I was in college, and I hopped in the car and I was painting a portrait and I prayed on the way," he said. "And by some chance, I got inside of the arena during his rally and I actually got the portrait to him."

He said during the encounter he told Obama he would one day get the chance to do his official portrait. That day came true several years later, in 2012.

"God gave me the opportunity with just knowing people and networking I was able to become one of [the] official portrait artist that Michelle and Barack Obama would have to sit down and, and actually choose among," he said.

"This one hit hard as I looked forward to sitting down with the Congressman to discuss this historical moment as he walked with King across the bridge and the déjà vu when he walked with President Obama across the same bridge," Hess wrote in the post. "It was this moment when I realized that I am a historian, meant to capture the moments that are too important for us to look over."