Employees reportedly gave puppies ‘medical concoctions’ to make them look perky for customers, according to a Humane Society investigation. 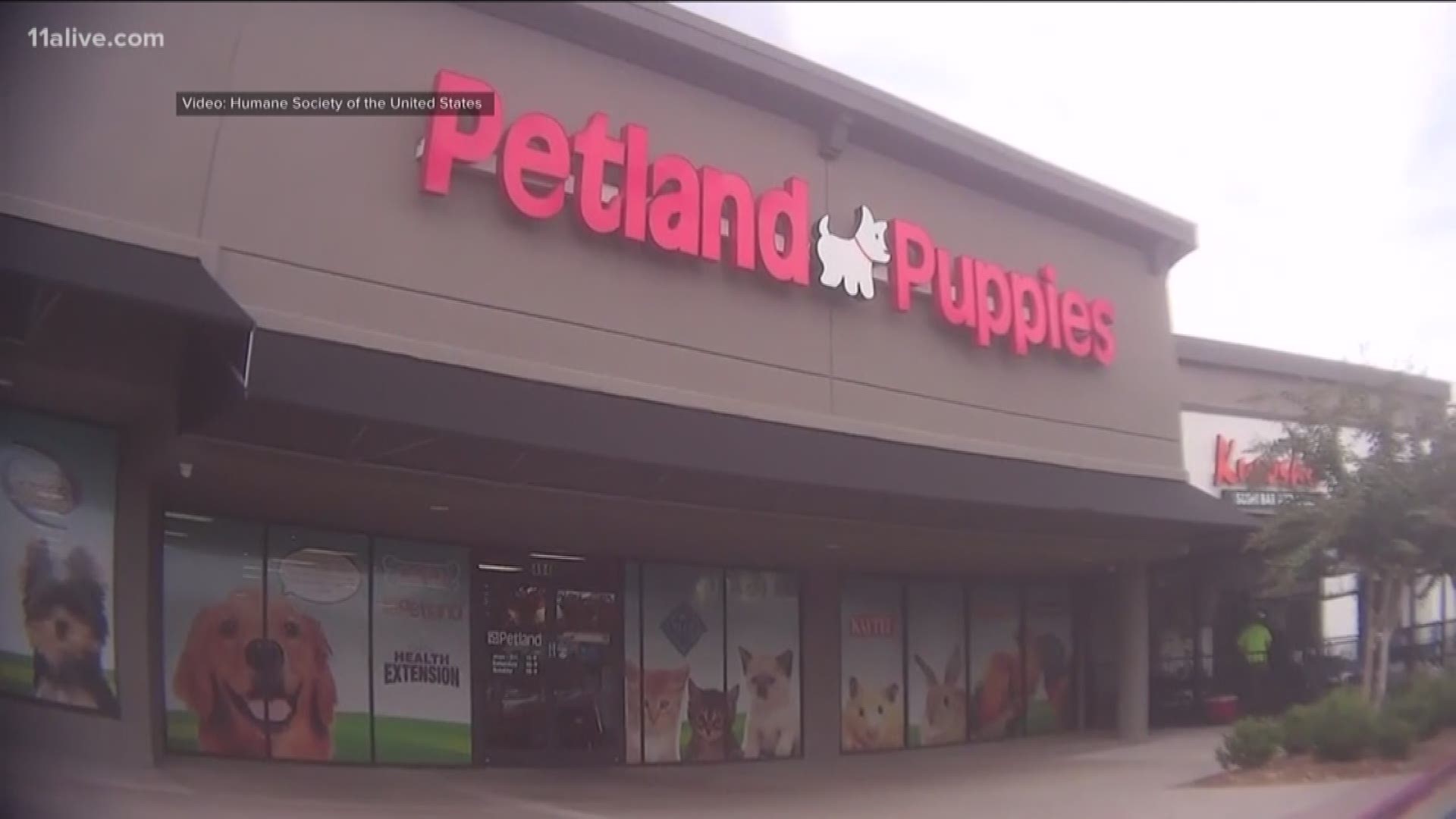 A report detailing allegations of puppy abuse at Petland Puppies' Kennesaw store has appalled pet owners across Georgia, after undercover investigators with the Humane Society of the United States reported that a dead dog was discovered inside a freezer at the Kennesaw store.

The animal advocacy group said they placed undercover investigators at two Petland stores this fall – one in Kennesaw, the other in Las Vegas.

An undercover investigator with the Humane Society worked at the Kennesaw location in September and October, according to the report. She claimed that she found a dead puppy in a black plastic bag in the store’s freezer.

“One of the store’s employees told our investigator that sometimes they came in in the morning and found that puppies have just passed away,” said John Goodwin with the Humane Society of the United States.

11Alive has chosen to blur the image, as some might find it disturbing.

'SHE KEPT GETTING SICKER'

A Petland customer in Kennesaw told 11Alive she paid $5,600 for her Neapolitan Mastiff puppy, Akeila, then had to spend nearly $1,000 on top of that in vet bills.

"She started coughing and her nose had this green liquid coming out of it," said Samantha, who asked 11Alive to not publish her last name, for fear of retaliation.

She said Akeila kept getting sicker and ultimately experienced kidney failure before they had to put her to sleep.

"It was hard, very hard, it was like losing our daughter," Samantha said. "And we think about her every day."

She said she and her husband bought Akeila through a payment plan that Petland arranged, their payment is about $175 per month, and they still owe $3,700, so their payments will continue for another 21 months.

"We're paying for our deceased dog, it is very sad," she said. "It broke my heart" to read the Humane Society report, "but I'm hoping something gets done about it" to protect puppies and customers in the future, she said.

Petland's corporate office said in a statement to 11Alive on Wednesday that the Kennesaw store is locally owned and operated, and the company is still "fact-finding."

"Petland, Inc. is looking into the matter and asks that (the Humane Society) provide us any details regarding this specific incident and give us an opportunity to interview their 'investigators'," said spokesperson Elizabeth Kunzelman. "As mentioned previously, each store has a consulting veterinarian who establishes the protocol and care of pets in the store."

The Humane Society stated it zeroed in on the two Petland stores because they’ve received over 1,200 complaints related to sick puppies at those locations and others across the country since 2006.

Goodwin said the investigators in Kennesaw and Las Vegas saw low-level employees giving puppies “medical concoctions” that were not labeled. He said the drugs were often used to keep the dogs looking perky and active in the stores.

“For example, they had one bottle that just said ‘The Cure’ on the side, and they would give it to puppies that were not eating,” Goodwin said. “There’s no dosage information, there’s no known ingredients – it just seems to be this haphazard approach to their medical care.”

The report also stated that in-store veterinary exams at the Kennesaw Petland store would sometimes last only about 15 seconds on each puppy, with kennel staff providing many in-store drug treatments.

The “concoctions” would improve the dogs’ appearance and appetites temporarily but would wear off by the time customers bought the puppies and took them home, according to the Humane Society report.

Some puppies sold at Kennesaw Petland came from an Indiana distributor called Blue Ribbon Puppies, which sold 161 puppies to five Petland stores across Georgia in a three-month period, according to the Humane Society report. The Blue Ribbon puppies were linked to an outbreak of a drug-resistant disease by the Centers for Disease Control and Prevention last year.

The disease, Campylobacter, infected more than 100 people, mostly through contact with puppies from Petland, according to a CDC advisory.

As of Jan. 18, there have been 4 reported cases of Campylobacter in Georgia that link back to pet store animals.

Dr. Michael Good, a veterinarian with the Humane Society who worked at a Petland store in Kennesaw for nearly a decade, wrote a witness affidavit detailing issues he saw in Petland puppies.

“There was no way for me to save all of those animals from death and prolonged illness because they were already incredibly sick when they arrived at the store,” Good told ABC News. He also reported seeing “numerous” dead animals in the Kennesaw store freezer – the same one indicated in the Humane Society report.

“Dr. Good’s testimony has been refuted numerous times in court; the CDC never stated Petland over-medicated its puppies; Campylobacter is commonly found in puppies, regardless of source,” Petland said in a statement.

Earlier this year, a judge threw out a class-action lawsuit launched by a Kennesaw woman, claiming the Petland pet store sold her a sick dog from a puppy mill.

Angela Zambrano bought a puppy from a store in Kennesaw in 2015, but it died less than a week later. The federal lawsuit alleges Angela’s mom paid $3,500 for a Shih Tzu puppy, who the store certified was healthy.

The lawsuit claimed Petland conspired to knowingly sell sick puppies, but a judge dismissed those charges. Other families came forward with similar stories.

Petland said that, according to an independent study, 1.2 percent of puppies they sell require “significant” hospitalization and medical treatment after they go home with their new owners.

“Considering they sell 70,000 puppies a year, that’s 840 puppies that require hospitalization,” Goodwin said. “That doesn’t include the ones who are sick, get some strong antibiotics and go home. So, I think that Petland’s statement is actually a confession that they’re guilty of exactly what we say they’re guilty of.”

THE ARGUMENT AGAINST PUPPY MILLS

Goodwin said that the problem isn’t exclusive to Petland – it’s indicative of a greater issue.

“There does seem to be a systematic problem in the commercial breeding industry,” Goodwin said. “Now, I’m not talking about the responsible breeder … I’m talking about a system where you have these large-volume commercial operations producing hundreds or thousands of puppies.”

The city of Atlanta banned the commercial sale of dogs and cats within city limits earlier this year. Now, all pet sales in Atlanta go through the Atlanta Humane Society.

Petland maintains that the Humane Society report is unfounded.

“HSUS’s annual 'undercover investigation' of Petland inaccurately portrays information in an effort to boost end-of-year fundraising efforts and to spread their anti-pet agenda,” Petland said in a statement on Tuesday. “Much of the information in their report is a regurgitation of information that has been dismissed legally and answered appropriately.”

The Humane Society of the United States recommends adopting animals from an animal shelter or rescue group, adding that those who wish to go through a breeder only purchase animals from people who let you see where the animals are bred and raised.