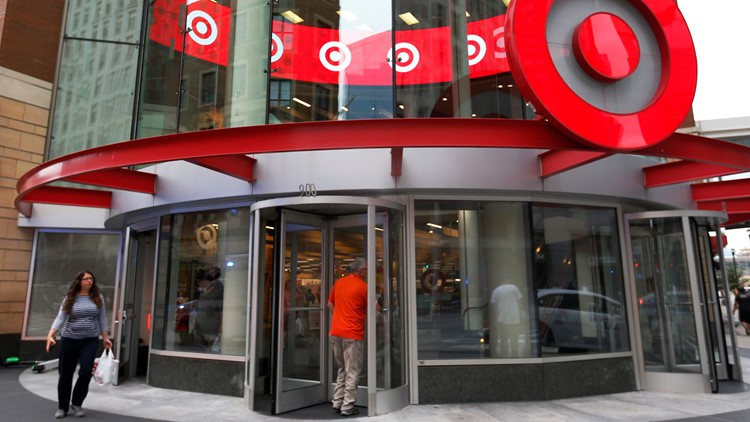 No misfires from Target as second quarter profits soar

MINNEAPOLIS — Target topped expectations in just about any way measureable during the second quarter as it pushes faster delivery and invests heavily in new private label brands.

The Minneapolis company raised profit expectations for the year, sending shares up nearly 12% before the opening bell Wednesday.

Target is underscoring the successes of big box giants as they make deeper inroads in their competition with Amazon.com.

Walmart raised its expectations for the year last week after a very strong quarter.

Both are expanding online services, bringing in fresh new merchandise and modernizing stores. Off-price chains like T.J. Maxx are also faring well, resonating with shoppers who love to treasure hunt.

They're taking market share away from mall-based clothing chains and department stores such as J.C. Penney's, Macy's and Kohl's, which are struggling with weak sales.

Target is spending more than $7 billion through 2020 to update its stores, open smaller stores in urban areas, and expand online.

Target's stores are still the company's strongest asset even though the battle for customers has moved online.

The company lets shoppers pick up online orders curbside. Through Shipt, which it purchased in December 2017, shoppers can get deliveries to their doorstep in a few hours because there is likely a Target store nearby. Items bought in a store can be delivered to homes in a number of cities, again because of Target's massive footprint.

The company said that sales fulfilled via Shipt as well as curbside or instore pickup more than doubled over the last year and drove nearly three quarters of its 34% online sales increase.

At the same time, Target is improving merchandise in its stores. It's making its largest foray into a private label groceries next month as it attempts to energize grocery sales.

On Sept. 15, 650 products will appear on store shelves under the brand "Good & Gather." That will expand to 2,000 products by late next year. The company expects that Good & Gather to be a multi-billion dollar business by the end of next year.

"By appealing to shoppers through a compelling assortment, a suite of convenience-driven fulfillment options, competitive prices and an enjoyable shopping experience, we're increasing Target's relevancy and deepening the relationship between our guests and our brand," said Brian Cornell, chairman and CEO of Target in a statement.

Target Corp. profits jumped 17.4% to $938 million, or $1.82 per share. That's 21 cents better than Wall Street was looking for, according to a survey by Zacks Investment Research.

The Minneapolis retailer's revenue was $18.42 billion, also breezing past expectations.