In this exclusive report, details on the City of Atlanta and the private sector joining to clear Atlanta streets of the homeless and provide care and housing. 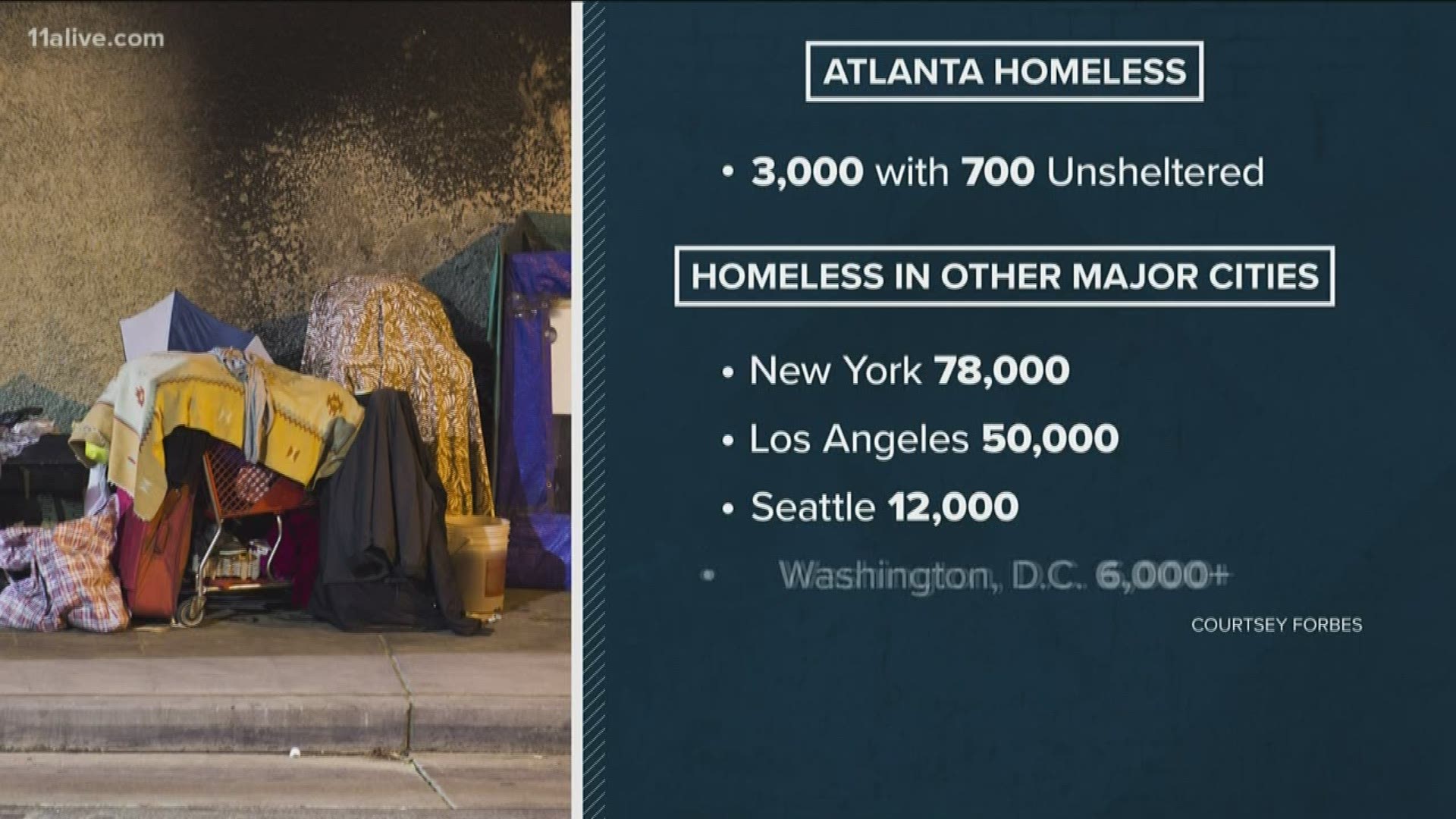 ATLANTA — A first-of-its kind partnership between the City of Atlanta and the private sector to help the city’s homeless and provide them with proper housing and care is expected to be formally announced by Atlanta Mayor Keisha Lance Bottoms late in August.

But 11Alive has exclusive details now on just how this partnership aims to drastically reduce the number of homeless people on Atlanta's streets.

By the latest point-in-time count - completed every January with more than 300 volunteers - Atlanta's homeless population is down 25% since 2015, but the city still has more than 3,000 homeless, with 700 unsheltered and living on the streets.

The same census formula used in Atlanta is used in most major American cities to track the homeless population.

Although Atlanta's homeless numbers pale in comparison to New York with 78,000 homeless, Los Angeles with almost 50,000, Seattle with 12,000, and Washington with more than 6,000, the problem is still noticeable in Atlanta, especially downtown near the major hotels.

“In the last 6 months or so we have really noticed a difference in the amount of unhoused folks that are congregating around downtown and creating new encampments in our area," he said. "And so we felt we were obliged to the community to say we need to get behind this and show that we are concerned."

This formidable challenge is now being met head-on with the HomeFirst initiative.

It is a landmark idea that came together through the efforts of Atlanta attorney and co-chair of the Regional Commission on Homelessness, Jack Hardin.

“We made our challenge to the city in December of 2016 and by February the city had accepted and by November they had sold $25 million worth of bonds and put them on deposit with Invest Atlanta,” he said.

Invest Atlanta is the entity that will administer the City’s HomeFirst funds.

Hardin then set out to raise the other $25 million from the private sector.

“We will address emergency shelters, permanent supporting shelters, and rapid rehousing," Hardin said. "We will do intensified street outreach and we have innovative strategies for prevention and diversion. We put lawyers in school systems to identify families experiencing imminent housing loss, and we will assist them in staying in housing in the school districts, so the child’s education is not disrupted by housing issues."

On the streets of Atlanta, Hardin says HomeFirst will have 15 social workers interfacing with the unsheltered homeless around the clock.

He stresses patience, as results of the street outreach take time.

“I would hope that over the next few months and certainly within the next 12 months people will begin to feel the difference,” he said.

In summing up the effort, Hardin added:

With $50 million on the line and a total focus on eliminating homelessness in Atlanta, the impact of HomeFirst will be carefully tracked and analyzed.

We will be following the progress of HomeFirst and will present frequent reports from the downtown streets, the shelters and the job training centers as the program gets into full swing.

He's 20, he's homeless and he just sang his heart out on stage