How a Georgia volunteer firefighter helped at Ground Zero on 9/11: 'Take each day. It's a blessing you have'

Tyger Vollrath was on his way to the airport in New York City on September 11, 2001, when fate drew him elsewhere. 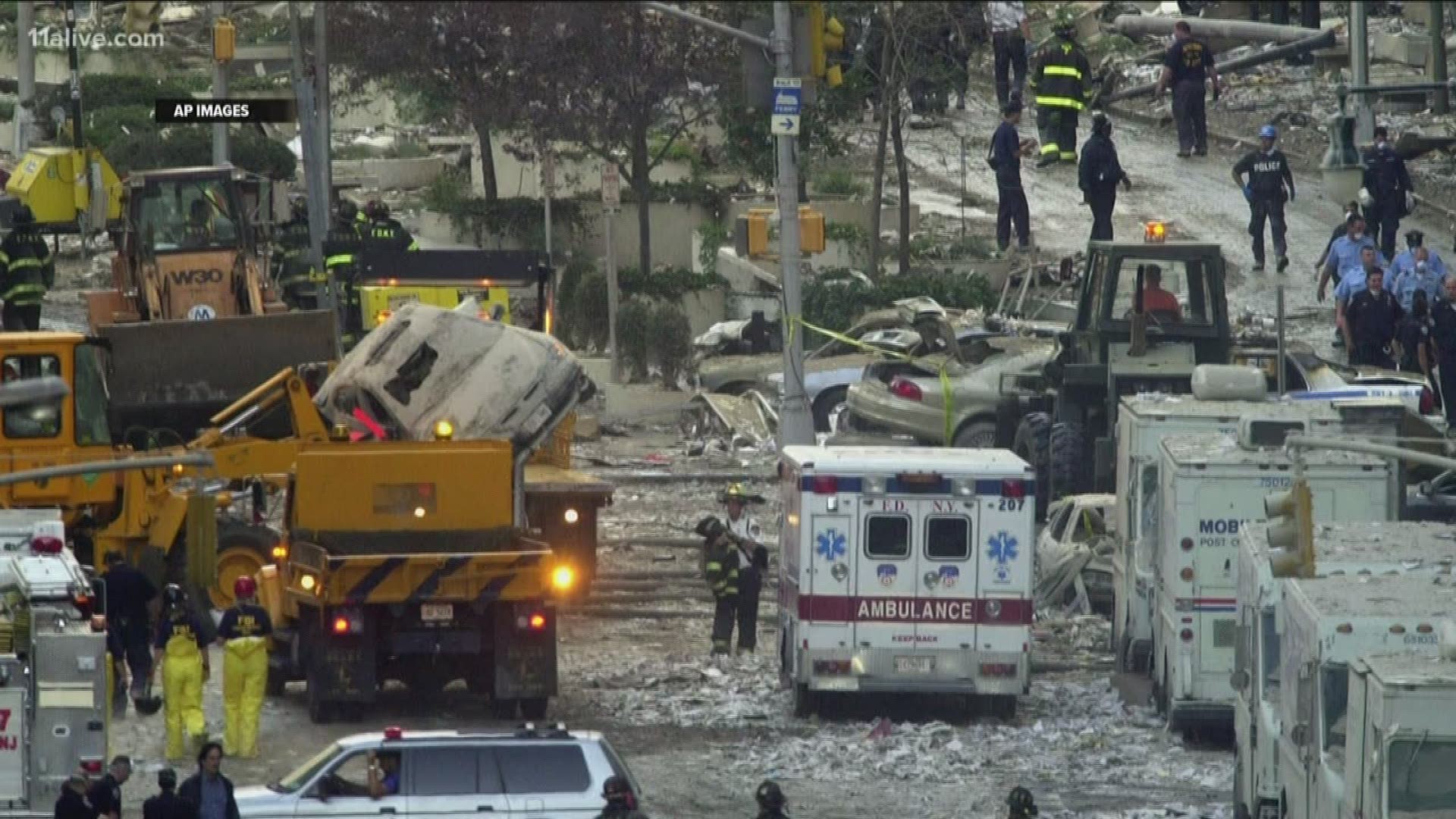 SMYRNA, Ga. — Tyger Vollrath, a volunteer firefighter from Smyrna, was in New York City 18 years ago on his way to the airport when he heard a plane had crashed into one of the Twin Towers.

“We heard it was a small airplane, thinking, ‘that’s crazy,’” Vollrath told 11Alive’s Liza Lucas at a 9/11 remembrance ceremony in Smyrna on Wednesday. “Then we actually saw the second plane come in and hit, and knew it was a big deal.”

Shortly after that, Vollrath would join a passing fire crew on their way to Ground Zero. His impromptu shift wouldn’t end for another 48 hours, as he did what he could during one of the most profound and devastating events in American history.

The way he recalls 9/11 now, he said, is like two different memories: What he later saw in news reports and documentaries, and what he witnessed amidst the rubble.

“I actually missed a lot. Not knowing what was going on,” he said. “We had no communication. Our batteries died right away.”

“It’s still there, but it’s like two different versions of events,” he said.

It started after the second tower was hit as firetrucks streamed toward the burning buildings.

“People started parking on the side of the road and started blocking traffic,” he said. “So I pulled over way off the road and tried to help direct traffic so firefighters could make it into the city.”

Then, one of the trucks enlisted Vollrath’s help.

From there, he made his way toward Ground Zero, into a situation fraught with more uncertainty than most people will ever experience.

“So much going through your mind through that time,” Vollrath said. “It’s kind of an adrenaline rush, but it’s also scary. I don’t know what I’m getting into. This is not my home, this is not my department. But you know it’s a big deal because, at that point, we’d already seen the one tower fall.”

He said the second tower collapsed as they made their way through the Holland Tunnel. As they approached the site, they came upon scores of people fleeing the collapse; their dusty expressions of fear, shock, and grief some of the most searing images from the tragedy.

“Not knowing what to do, where to go, what’s the plan – it was basically chaos,” Vollrath said. “We just grabbed what equipment we could – and there was a group of eight or nine of us, we just started doing rescue and putting out what we could.”

“They use the terms of ‘awe.’ It’s so big,” he added. “It was so big, you couldn’t really do search and rescue. It was just a massive, massive pile of stuff. We just started to do perimeter search.”

He described an eerie quiet to the scene, as it emptied of people and all that were left were bewildered, but resilient, first responders.

It was where he would spend the next two days.

Now, 18 years later, he told 11Alive on Wednesday he can feel the distance between today and that bright Tuesday in September that turned into darkest day in recent memory.

But Vollrath said he thinks about the many for whom the effects remain immediate.

“The emotional scars have kind of healed. It’s been 18 years,” he said. “But now we’re seeing the effects of the physical scars. A lot of people are still getting sick.”

“The battle may be over, but the war isn’t,” he added. “We really need to take care of those people.”

As for his own extraordinary place in those events, they had the impact you would expect.

“It’s still pretty deep, I still get pretty emotional sometimes,” Vollrath said. “It has changed my perception on life. Take each day, it’s a blessing you have.”

“Because you never know when it’s going to change.”