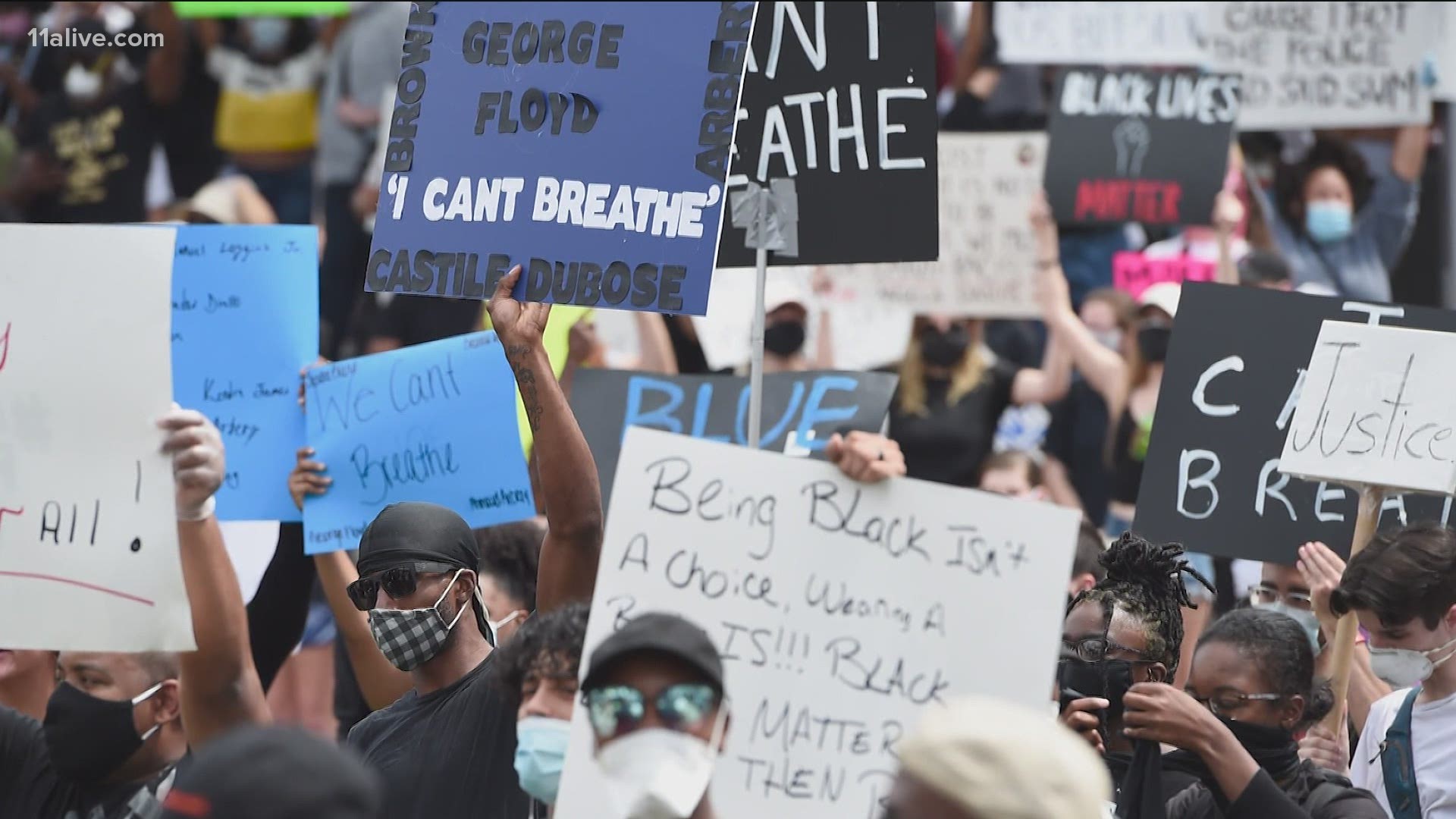 ATLANTA — After calls for racial equality last summer, many companies decided to take a stand on social issues. Following months of research, the Metro Atlanta Chamber is taking action to create racial equity in the city with a new multi-step action plan.

"The business community said, 'What can we do collectively to make an impact'," Kirkpatrick said.

In the wake of summer 2020 protests and the violent arrest and death of George Floyd, demonstrators received support from an unexpected place: corporate America.

Credit: AP
Demonstrators protest, Friday, June 5, 2020, in Atlanta. Protests continued following the death of George Floyd, who died after being restrained by Minneapolis police officers on May 25. (AP Photo/Mike Stewart)

Iconic brands like Nike stood up against racism and told others to be a part of the change. The streaming company Netflix set off a chain reaction of various company tweets supporting the Black Lives Matter movement. At the time it was easy to say something, but many wondered when companies would take substantial action.

"We are in this moment trying to embody the urgency of now," said Deisha Barnett, the chief brand and communications officer and the head of diversity and inclusion at Metro Atlanta Chamber.

"We think that Atlanta, and in particular our business community, can be a wonderful example of how to really accelerate change," she added.

Kirkpatrick and Barnett are taking the first step to answer the call for action. Through the Metro Atlanta Chamber, the women helped launch The ATL Action for Racial Equity. It’s a multi-year, multi-step action plan designed to address the ongoing effects of systemic racism impacting metro Atlanta’s Black community.

"This is an opportunity for the business community to lean in collectively together," Kirkpatrick said.

For years, Atlanta has been seen as a Black mecca. The fact sheet The ATL Action for Racial Equity provided to 11Alive lists data points and research done by different organizations. One point lists Atlanta as having the greatest population share of Black residents. The city ranks No. 2 among large metros for Blacks working in management positions and No. 3 for Black-owned employer firms.

However, even a mecca has flaws.

"Atlanta in many categories leads," Kirkpatrick said. "But it’s not strong enough when you look at the equity issues and the equity numbers especially economic mobility within our Black community."

A Brookings Institute study from 2018 found that Atlanta was the worst place for inequity in the country.

"If you’re born poor in Atlanta you only stand about a 4 percent chance of moving up the economic rung," Barnett said.

Reports also claim that 30 percent of Black adults in the metro area have a bachelor’s, graduate, or professional degree compared to 44 percent of white adults, according to a Bloomberg report. The median household income of Black people is 67 percent of white people.

The Metro Atlanta Chamber is tackling the issue with help from more than 150 businesses that have signed on to the initiative.

"It’s just great business," said Camye Mackey, the chief people, diversity, and inclusion officer for the Atlanta Hawks. "It’s one of those things that it really will help build a stronger and thriving community and world ultimately."

Six days after Floyd’s death, Hawks CEO Steven Koonin tweeted, “silence is cowardly…Stop hiding behind your badges, stop breaking parents' hearts, and stop pretending this isn’t happening. Start....loving each other, start listening to each other, and start celebrating our differences."

Silence is cowardly ...Stop hiding behind your badges, stop breaking parents hearts, and stop pretending this isn’t happening. Start....loving each other, start listening to each other, and start celebrating our differences.

The Hawks and the other committed companies will work to make improvements in four areas: corporate policies, inclusive economic development, education, and workforce development.

The chamber created a playbook for each category including best practices, resources, and peer-to-peer opportunities. Each company will have an annual assessment to track their progress.

Businesses that want to sign on to the Metro Atlanta Chamber’s initiative can visit the organization's website.