Officials say the lack of hospitals, grocery stores, and access to viable medical care are taking a toll on some Georgians. 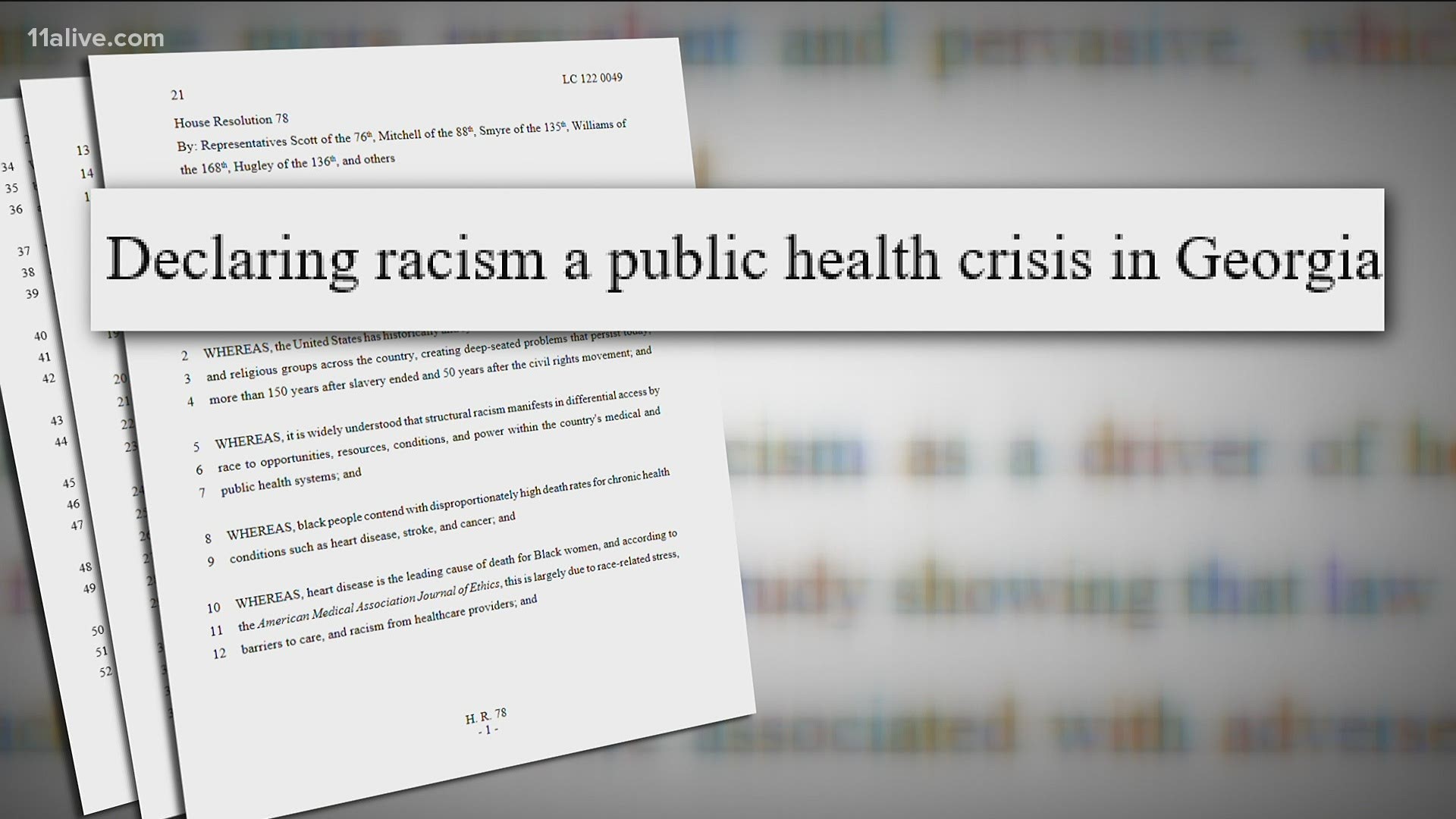 ATLANTA — A Georgia state representative believes racism is the root of many health issues facing African Americans and she hopes a resolution could affect change by declaring it a public health crisis.

"My intent for this resolution is to start a healing process for the state of Georgia," said State Rep. Sandra G. Scott, D-Rex, Ga.

Scott said the first step is to acknowledge the effects racism has on the health of African Americans. She believes House Resolution 78 will do just that, by declaring it a public health crisis.

Scott said systematic racism can be shown in different ways for African Americans, like the lack of access to proper health care, a lack of grocery stores in communities of color, and lower-paying jobs that can impact their health.

"We all know that black women are dying from pregnancy and childbirth at three times, more than our white women," she said.

This is a topic 11Alive reported on in our series Mothers Matter which found, for every 13 white women who die during pregnancy or within one year of giving birth, there are 44 black women who die.

According to the Centers for Disease Control and Prevention, black women are three to four times more at risk of dying from pregnancy-related causes than any other race. Most of these deaths are preventable.

Scott also references Susan Moore, a black doctor who contracted COVID-19. In a viral Facebook post just two weeks before she died, she said a white doctor treated her like she was a "drug addict" and didn't want to give her Remdesivir and other medication she believed would save her life. She also said her pleas for more treatment or to be transferred to another hospital were ignored.

"My goal is to look at our policies first from housing to transportation to see where we can infuse equity," said DeKalb County Commissioner Larry Johnson.

He spearheaded the resolution to declare racism a public health crisis in Dekalb. Since its passing, he's being able to have more in-depth studies. He said there is even a racial disparity in the plan for pharmacies distributing COVID vaccines.

"I just had a map done around pharmacies because they said pharmacies were the next location for the vaccine rollout," he said. "And I got the map back, and guess where most of the pharmacies are located? It’s in the wealthier, white part of town so the access to the vaccine is still going to be compromised,"

Johnson said having this kind of data allows the opportunity to make changes.

"The goal for this is not for us to take away from another group, the goal is to have a level playing field," said Johnson.