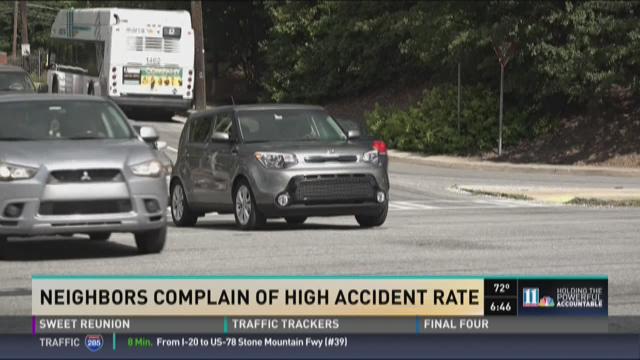 ATLANTA – After dozens of accidents at a busy Atlanta intersection, commuters are calling for change.

Jessica Emerson lives near the intersection of Northside Drive and 10th street. She has witnessed enough accidents to convince her change is needed to ease congestion, and help drivers through the intersection.

“People are obviously frustrated,” says Emerson. “The first week we moved in, there was a huge crash. We thought it was a one time thing. It's been consistent.”

According to GDOT records, 2016 has seen an accident about every 5 days at the intersection of Northside Drive and 10th Street. Records show about half of the accidents her over the last three years involve left turns.

11Alive’s Commuter Dude observed one afternoon rush hour. Traffic backed up on 10th Street behind drivers trying to turn onto Northside without a left turn lane or arrow. One driver became so impatient, he forced his way into the intersection so stop oncoming traffic so he could make the left onto Northside.

“It seems like if we had green arrows here, it would move so many more cars through the intersection,” says Emerson. “It seems like such a simple fix I don't understand.”

GDOT recently placed “smart” traffic lights at the intersection, which should help with congestion. GDOT is also in the early stages of a study that could bring more improvements to a long stretch of Northside, but change won't come for years.

The Renew Atlanta infrastructure improvement project has targeted a long stretch of 10th Street for traffic signal upgrades, but a spokesperson for the city says the scope of the work hasn't been determined yet.

GDOT says for left turn arrows to be effective for drivers on 10th street, there would have to be designated left turn lanes. That would mean redesigning the intersection.