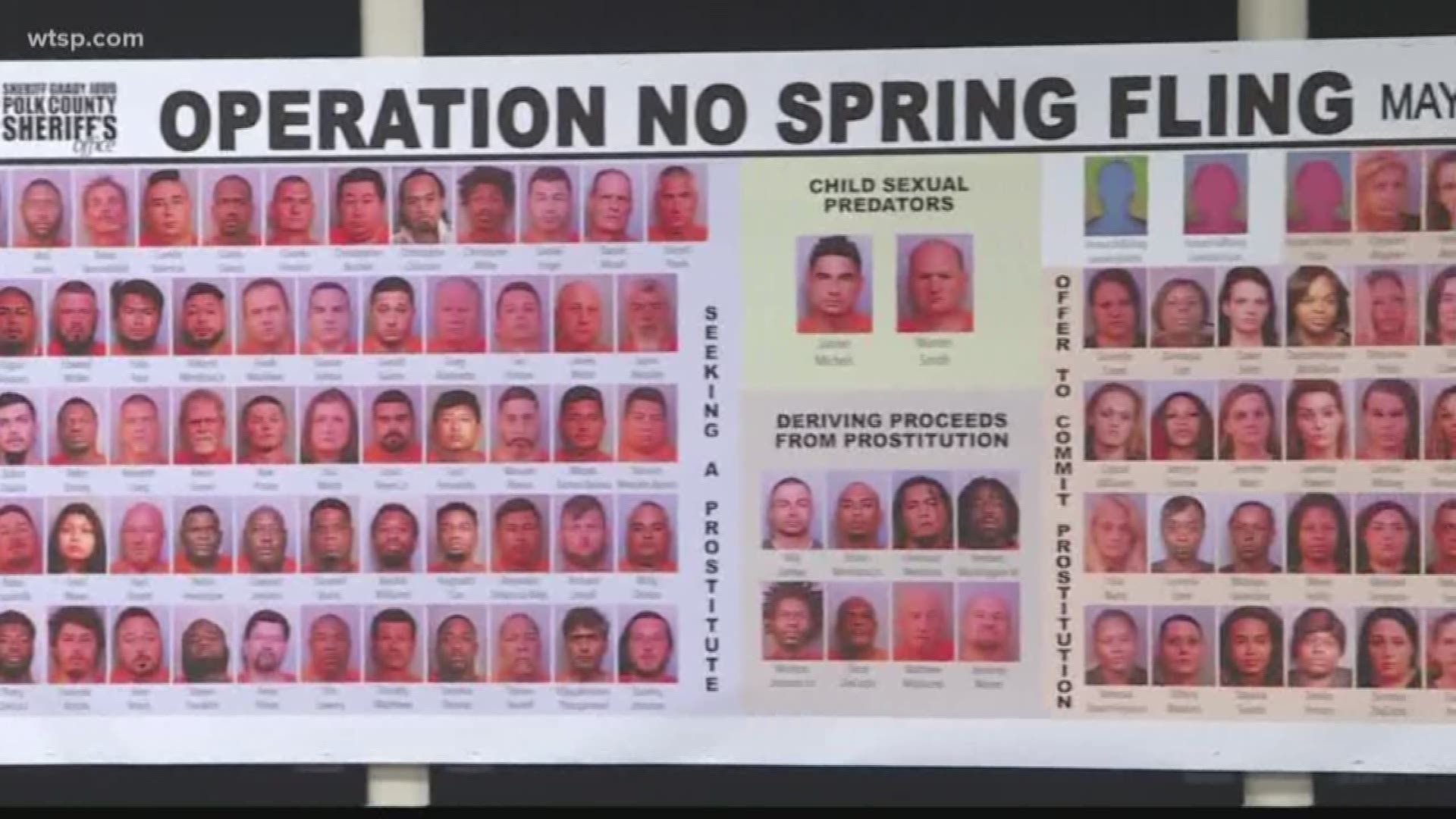 WINTER HAVEN, Fla. — More than 150 people were arrested as part of a six-day sting in Polk County.

Sheriff Grady Judd said the sting was to help detectives identify victims of human trafficking in prostitution. The operation started on May 14 and resulted in 154 arrests.

The sheriff's office said it worked with local law enforcement in Lakeland, Winter Haven and Haines City for "Operation No Spring Fling."

Judd said the suspects range in age from 17 to 69 years old and the charges include soliciting prostitution, procuring prostitution, traveling to meet a minor for sex and child pornography.

Of the suspects arrested:

The sheriff's office said among the 154 suspects, there were 567 previous felony charges and 695 previous misdemeanor charges.

"The primary goal in operations like this is to find victims of human trafficking who are being manipulated into prostitution," Judd said in a news release. "Prostitution is also a public safety issue involving the spread of diseases, the use of and dealing in illegal drugs, and other criminal activity that is associated with prostitution. It should be well-known by now that Polk County is not a good place to be involved with prostitution, thanks to operations such as this."

During a Tuesday morning news conference, Judd detailed some of the allegations against suspects from Tampa, St. Petersburg, Riverview and Lakeland.

The sheriff's office said James Michels, 34, from Tampa, started a text conversation with undercover detectives posing as a 14-year-old boy. Michels is accused of traveling to "see some kid" for sex with the teen. Detectives said Michels' phone had 50 images and more than 100 videos of child pornography on it.

Michels was charged with traveling to meet a minor, misrepresenting age via computer to lure a minor, lewd battery, failure to notify of HIV, use of a two-way communication device to lure a minor and 200 counts of possession of child pornography.

The sheriff's office said Warren Smith, 55, also engaged in a conversation on social media with who he thought was a 14-year-old boy. Detectives said Smith told them he is married and often travels to meet men for sex acts. Smith was charged with traveling to meet after using a computer to entice a child, lewd battery and unlawful use of communication device.

Detectives say Antonio Wilson, 25, a child care worker at North Shore Elementary School in St. Petersburg, was charged with carrying a concealed weapon, contributing to the delinquency of a minor and offering to commit prostitution. The sheriff's office said he offered to engage in sexual intercourse for $100. Detectives say Wilson also traveled to an undercover location with another man and a juvenile male to engage in sex acts.