'I'm not a magician': Lawyer for man pictured with lectern in Capitol riot says photo a 'problem'

Adam Johnson was seen wearing a tracking device as he walked out of a Tampa courthouse. 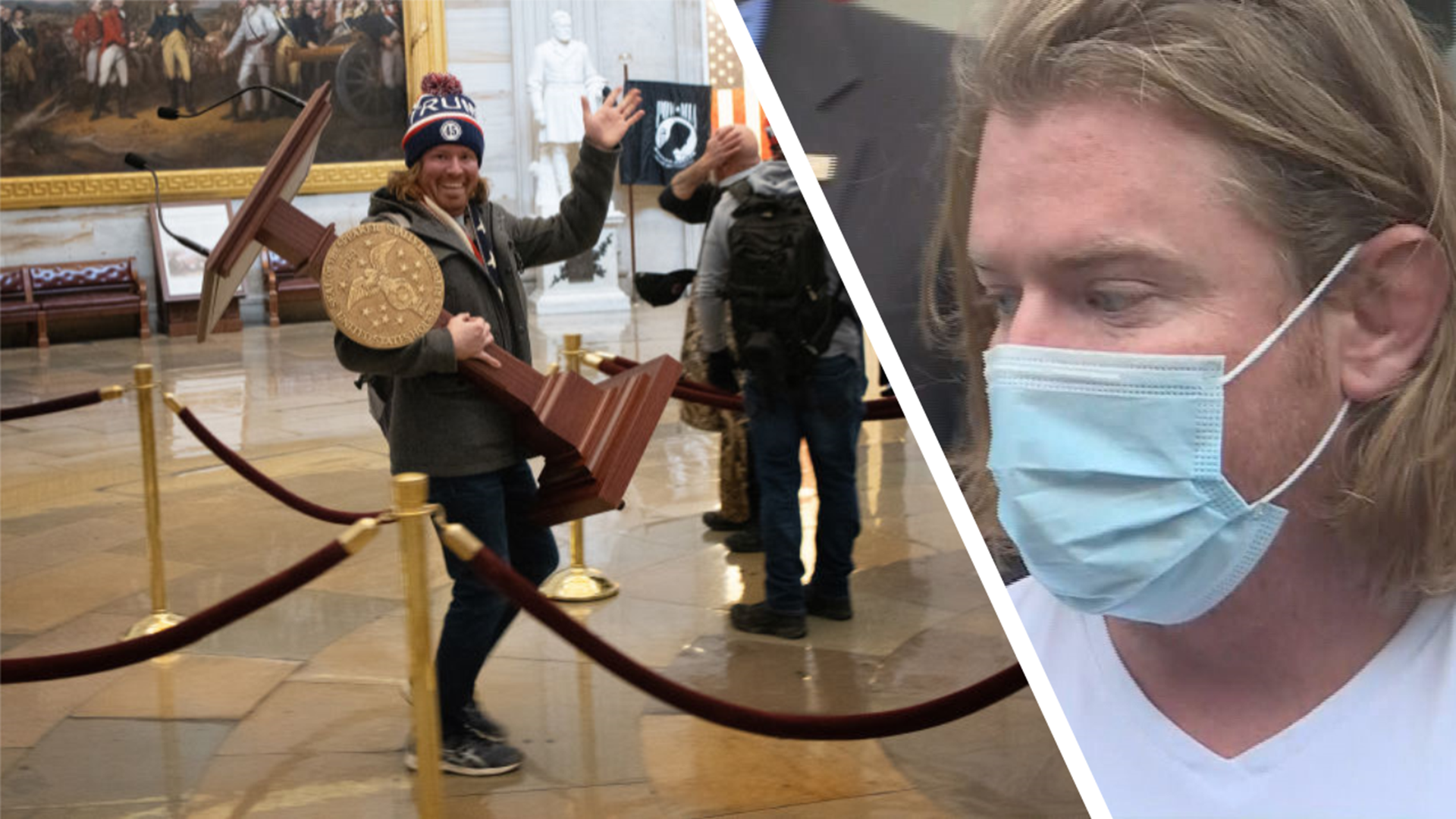 Johnson, 36, of Parrish, Florida, for his release signed a $25,000 signature bond, which he does not have to pay unless he fails to show up at his next court appearance.

He is charged with one count of knowingly entering or remaining in any restricted building or grounds without lawful authority, one count of theft of government property and one count of violent entry and disorderly conduct on Capitol grounds, according to the U.S. Attorney's Office.

A photo of Johnson, taken by Getty Images photographer Win McNamee, was one of many that went viral during the armed insurrection of the Capitol on Wednesday by supporters of President Donald Trump.

Credit: Win McNamee/Getty Images
A pro-Trump protester, later identified as Adam Johnson of Parrish, Florida, carries the lectern of U.S. Speaker of the House Nancy Pelosi through the Rotunda of the U.S. Capitol Building after a pro-Trump mob stormed the building on Jan. 6, 2021, in Washington, D.C.

Johnson was jailed Friday, Jan. 8, on a federal warrant in Pinellas County following the riot at the Capitol. Five people were killed, including Capitol Police Officer Brian Sicknick, who was hit in the head with a fire extinguisher.

One of Johnson's lawyers told reporters outside the Tampa courthouse there has been "a lot of judgment" against Johnson based on the photograph, which has led to death threats to him and his family.

"At this point, what he'd like to do, is just get home to his family. He'd like some privacy and spend some quality time with them," David Bigney said.

Judge Christopher Tuite ordered Johnson to surrender his passport, submit to substance abuse tests, surrender all firearms and wear a tracking device. Under the terms of his release, he would not be allowed to travel outside the Middle District of Florida, unless it's to Washington, D.C., for court cases.

#BREAKING: After making his first appearance in court today, Adam Johnson just walked out of the Federal Courthouse in downtown #Tampa. He's the man caught on camera with @SpeakerPelosi's lectern. You'll see here he has an ankle bracelet on for tracking @10TampaBay pic.twitter.com/F1Q3RuXa8A

The judge warned Johnson violation of any of these terms could result in a 10-year sentence plus contempt of court charges. It comes on top of any potential sentence from any pending charges against him.

A second lawyer of Johnson's, Dan Eckhart, acknowledged the photograph of their client may present a problem defending in court.

"I don't know how else to explain that, but yeah, that would be a problem. I'm not a magician, and neither is Mr. Bigney. So yeah, we have a photograph of our client, who appears to be in a federal building or inside the Capitol with government property," Eckhart said.

RELATED: National Guard sending at least 10,000 troops to DC ahead of Inauguration Day

Johnson is a stay-at-home dad who lives with his wife and five boys. His prior criminal history includes possession of marijuana and violation of probation charges.

The lectern and a gavel that was reported missing were recovered undamaged, The Washington Post reported, citing a spokesperson for the Committee on House Administration.

It was stored on the day of the Capitol attack in the Speaker's Suite, located under a staircase to the third floor of the House side of the Capitol building, the FBI said. A day later, the lectern was found in a corridor on the Senate side of the building.

Trump, in a futile attempt to overturn the 2020 election in which President-elect Joe Biden won, recycled several false claims to a crowd of supporters hours before the riot as Vice President Mike Pence and Congress prepared to count Electoral College votes.

"If you don’t fight like hell, you’re not going to have a country anymore," Trump said. "Let the weak ones get out," he continued. "This is a time for strength."

Trump told the crowd he would go with them but didn't.

Pence shortly thereafter issued a statement, breaking with Trump, saying he did not have the authority to reject any electoral votes.

Here's a timeline of events Wednesday that led up to the violent protest at the Capitol and the congressional certification of Biden's win: