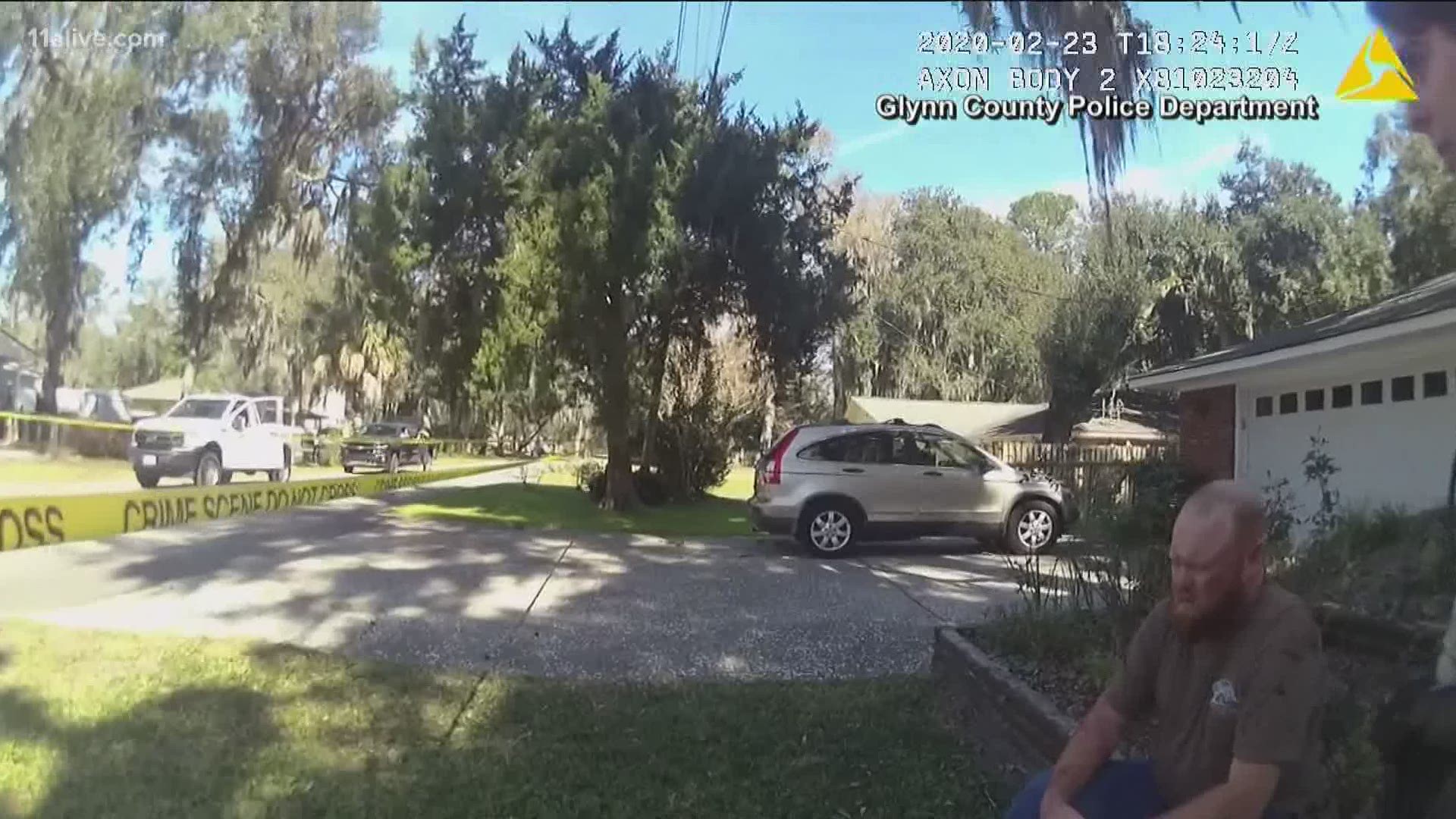 BRUNSWICK, Ga. — New body camera video has been released in the fatal shooting of Ahmaud Arbery, the Black man killed earlier this year after being confronted by a white father-son duo in a south Georgia neighborhood.

11Alive's affiliate station, First Coast News in Jacksonville, obtained a copy of the body camera video that shows Glynn County Police officers arriving to the scene moments after 25-year-old Arbery was shot. His family said he was out jogging when the shooting happened.

In the video, police officers can be seen checking on Arbery before speaking with the three men now charged in his death - Greg and Travis McMichael, as well as William "Roddie" Bryan.

Greg McMichael can be seen telling police he saw Arbery running through the neighborhood before he grabbed his gun and asked his son Travis to grab a shotgun. Both are accused of following Arbery because he "looked suspicious," then shooting him during a struggle.

Then, Travis McMichael, who was captured on viral cell phone video shooting Arbery, tells police what happened from his perspective:

Police: "Do you have any other weapons on you? "

Travis McMichael: "If he would've just stopped, this wouldn't have happened."

Police: "That's fine. Like I said, just take a breath."

Travis McMichael: "I want it done right. This doesn't look good. I just shot a man. Last thing I'd ever want to do with my life."

Editor's note: Some may find pieces of the video upsetting.

In the body camera video, Bryan can be seen telling police he joined in the pursuit after seeing Arbery and the McMichaels go past his house. Bryan is accused of blocking Arbery in, preventing him from escaping the McMichaels.

While the McMichaels argued that there had been break-ins in their neighborhood before the shooting, there is no evidence to support that Arbery was connected to them in any way.

All three men were charged with murder and remain in jail without bond, though they've all pleaded not guilty.

In a statement, civil rights and personal injury attorney Ben Crump issued a statement in response to the footage, saying it solidifies Bryan's role in the fatal shooting and will help bring justice to Arbery.

“After publicly absolving himself of having any part in Ahmaud Arbery’s modern-day lynching, this newly released body camera footage confirms what we had long suspected about William ‘Roddie’ Bryan," Crump said. "The footage clearly documents that Bryan used his truck to block Ahmaud from escaping the McMichaels. With the murderous teamwork of Bryan and the McMichaels exposed for the world to see, we are confident that this will bring us one step closer to justice for the Arbery family.”