Mayor Bottoms held a morning news conference on Friday to outline proposals by an anti-violence council she formed in May. 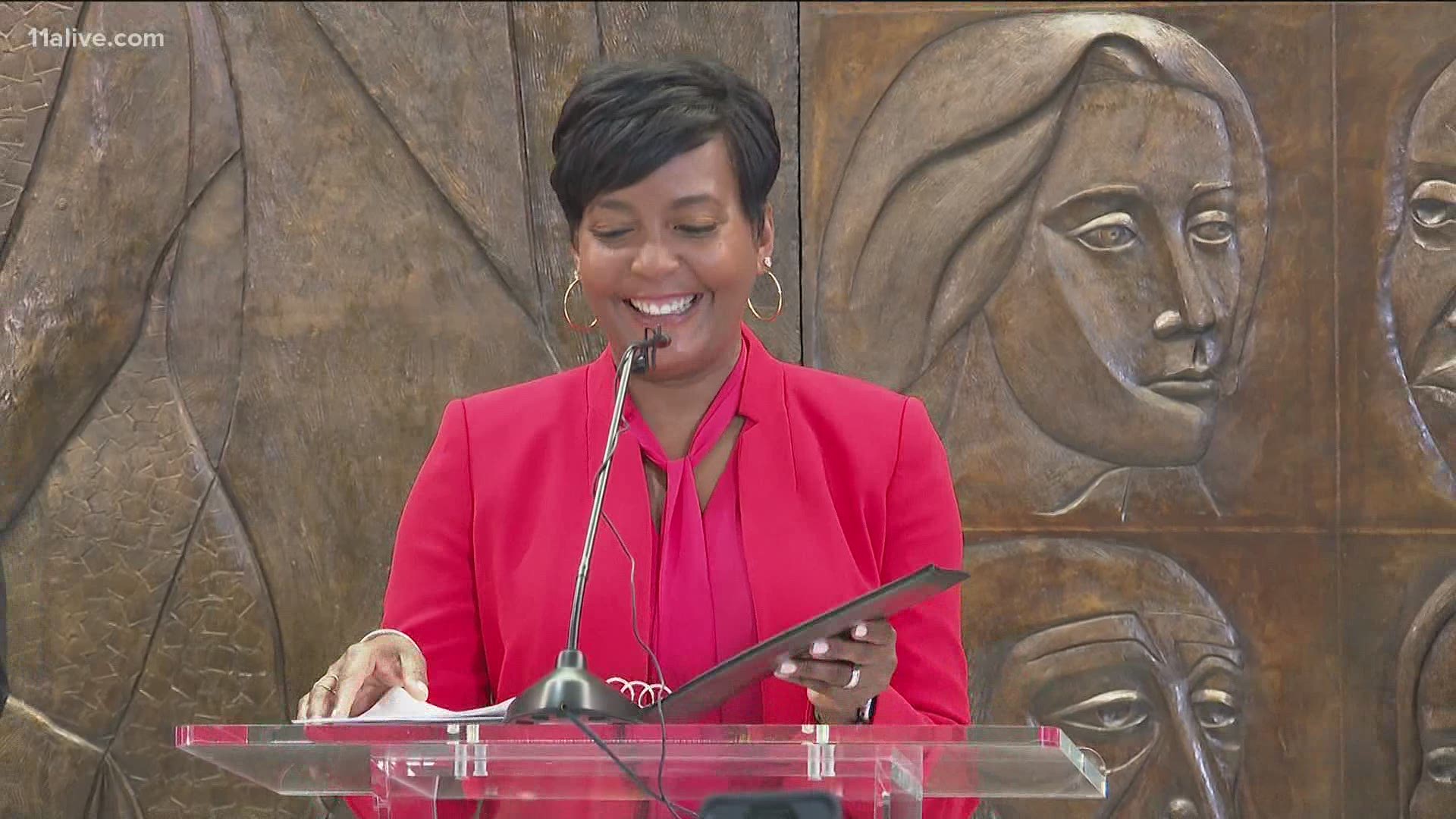 ATLANTA — Atlanta Mayor Keisha Lance Bottoms on Friday outlined proposals delivered by an advisory council she formed as a response to the rise in violent crime, with a $70 million price tag on a number of initiatives.

It would be a major investment in public safety and law enforcement, coming against the backdrop of calls to defund police last year that sprouted out of the popular protests against racial injustice.

Much of the money, the mayor said, would have to be freed up "at the expense of something else."

Mayor Bottoms said public safety as a number one priority was justifiable, nonetheless, because "what I know is when our communities aren't safe, or when they don't feel safe, nothing else really matters."

The mayor's council - which included a range of figures, from former acting U.S. Attorney General Sally Yates to UPS CEO Carol Tomé - made a full report on the city's efforts to reduce violent crime and what it should do further.

Those recommendations included creating a dedicated Office of Violence Reduction within the Mayor's Office to lead the city's overall strategy and expanding a neighborhood-based crime reduction program called NPU-V that Bottoms said has already seen success as a pilot program in neighborhoods, including Peoplestown and Mechanicsville.

Of the $70 million investment that would fund many of these recommendations, the mayor said $50 million would be allocated from public funding with a goal to raise the remaining $20 million from philanthropic organizations and non-profits.

Of moving city funds from other programs to public safety and law enforcement, Bottoms said: "People will have to understand that for us to implement these recommendations, we are going to have to cut somewhere else. Where that is we will best determine."

The mayor noted that reallocating city funds would likely also require the blessing of City Council.

Atlanta Police Chief Rodney Bryant said that some initiatives already underway have begun to see results. He said homicides were up 60% earlier in the year, but that they're now down to being just 25% up, "meaning we are putting a dent in that violent crime and we're believing the strategies in place are actually working."

Chief Bryant attributed some of that to re-focusing police efforts from maintaining public order during social unrest last year and a recovery in police morale.

"We are beginning to see that tide turn," the chief added.

He said that a refocused police force has had "more ability to be proactive in the spaces that we are seeing violence."

Many of the programs included in the recommendations would extend past the end of Bottoms' term. With the mayor declining to seek re-election, that will likely make them a topic of debate this year in the race to succeed her.

The plan is getting high marks from nationwide experts in anti-violence initiatives, including Thomas Abt, Senior Fellow with the Council on Criminal Justice.

“But the work will need to be continued," Abt said Friday.

Abt said the next administration will need to pick up where Mayor Bottoms and her plan leave off. He called it "a strong start."

Abt helped guide the mayor's advisory council about what needs to be done, basing his recommendations, in part, on what has worked in other cities.

Abt presented three principles to the mayor's advisory council:

"It’s specific hot spots, micro locations. A certain liquor store, a certain housing project. So it’s very important not to stigmatize entire groups of people or entire neighborhoods with this broad brush of violence. You need to be focused like a laser.... We need progressive criminal justice reform, but we also need to keep people safe.... It's not all community programs and it’s not all police law enforcement," Abt said. "We need both, working together, simultaneously."

But what will the next mayor do with the plan when taking office in January?

Three of the candidates for mayor responded to 11Alive:

“As a citywide elected Councilman, I look forward to working with Mayor Bottoms to implement this important first step to fighting crime in Atlanta. More officers and more innovative security measures like license plate readers and security cameras will help put the city back on the right footing.

As Atlanta's next Mayor, I'll focus my efforts on launching a gang task force to reduce violent crime and protect our most vulnerable citizens. My plan for public safety includes working with all of the city's stakeholders –from Bankhead to Buckhead – to make our community safe for everyone.”

"The Mayor’s Task Force has developed a serious set of recommendations to fight violent crime in our city. To some extent they mirror the plan that I have proposed which includes a mix of short and long-term initiatives. Execution, however, is everything and that is why I already have a public safety transition team in place to make sure that the best plans move from the table to the streets. As soon as possible.

I am confident that, along with the best ideas announced today, my innovative approach to public safety will see a reduction in major crimes as well as in public nuisance crimes. From the start, public safety will be at the center of my mayoral administration."

"I'm glad to see that Mayor Bottoms is implementing the recommendations of the City Council and the Task Force. This is an all hands on deck situation that requires actions that can be taken immediately. As reported, the plan announced today seems to provide some good actionable items."

Abt calls the plan a gift from the departing mayor to her successor--if the city keeps focused on it long after she is out of office.