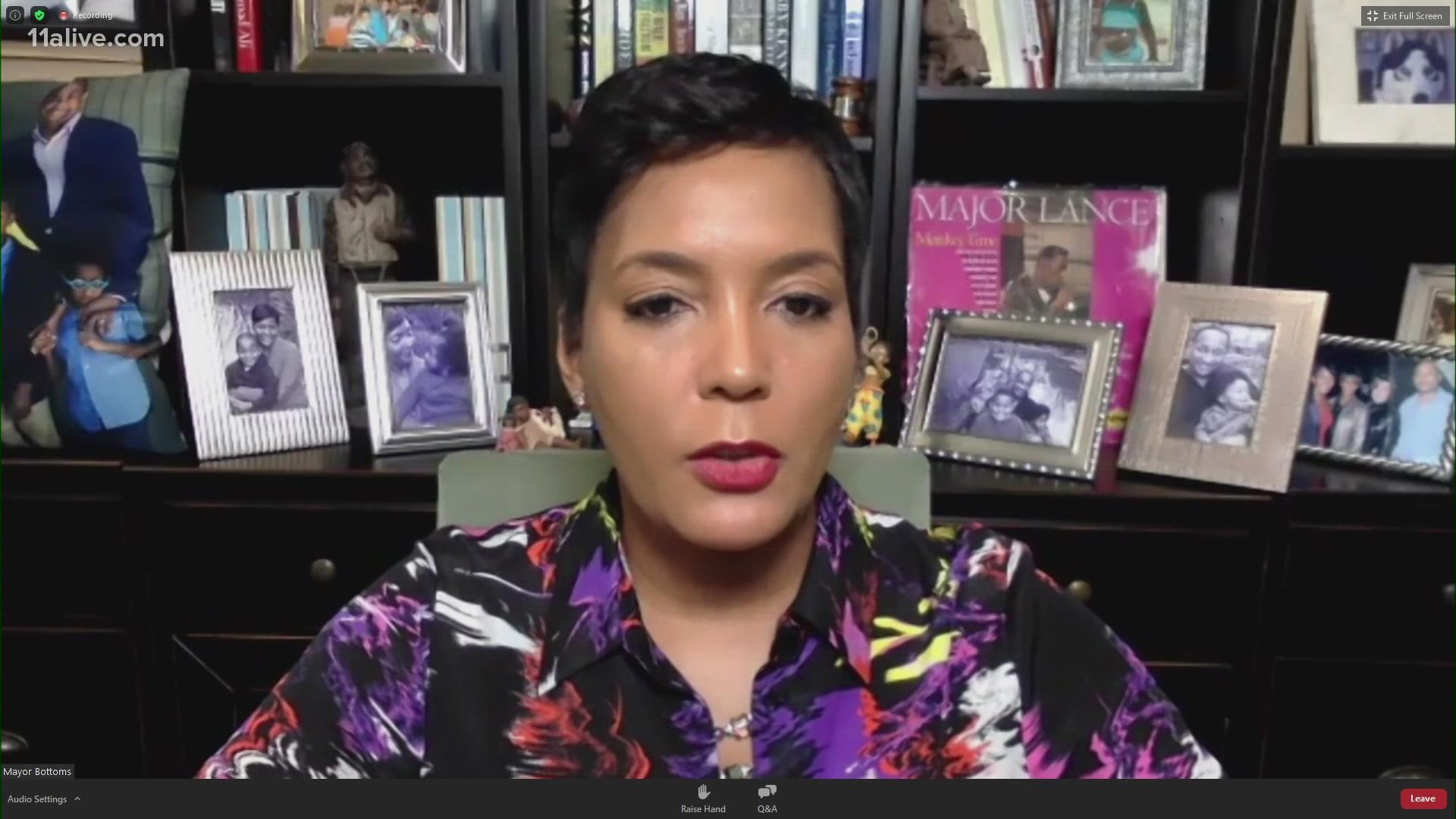 ATLANTA — Atlanta Mayor Keisha Lance Bottoms spoke Wednesday to the issue of rising violent crime in Atlanta, acknowledging that "we recognize that this is a problem" that "we have to get a handle on."

The Atlanta Police interim chief, Rodney Bryant, also spoke to a number of strategies that he believes has the city "moving in the right direction," among them rejoining state and federal task forces at what he described as an "analytical level."

As of her press availability on Oct. 28, there have been 117 homicides in Atlanta this year, compared to 99 all of last year. That tracks with a national trend of violent crime rising across major cities.

"We recognize that we are seeing an uptick in crime in Atlanta, and unfortunately Atlanta's not alone because this is a national trend," Mayor Bottoms said. "We were seeing our numbers tick a bit upwards before the pandemic began, and in the midst of the pandemic - on top of the social unrest that we've seen across the country - we've seen those numbers go up even more."

The mayor said crime was one among a number of issues facing the city but that "you don’t get to be mayor of Atlanta without being able to walk and chew gum at the same time."

"Right now our eye is on crime in Atlanta and we'll continue to do that because we know that when people are not safe in our city, and even if there's a perception that people aren’t safe in our city, that it is not just a concern for those who call Atlanta home but also for our visitors and our businesses as well," she said.

Atlanta Police Assistant Chief Todd Coyt told 11Alive's Kaitlyn Ross last week the force was "not happy" with how violent crime had trended up, and described a struggle to bring it down one part of the city only for it to rise in another part.

On Wednesday, interim Police Chief Rodney Bryant said he had worked to improve the department's partnerships as a means of "putting as many resources together as it relates to violent crime."

He said he had reestablished partnerships to work with federal and state task task forces "at an analytical level, so we are able to bring to bear more resources to address certain issues that we see throughout our city."

11Alive has reached out to the department for more details on that task force participation. Atlanta Police pulled out of operational participation in federal task forces last year, because city officers are prohibited from wearing body cameras while working on the federal operations.

It became a serious point of contention following the death of Jimmy Atchison, who was shot by now ex-Atlanta officer Sung Kim during a federal arrest.

"We also recognize that crime doesn’t just stay inside the city of Atlanta, that many of these perpetrators of crimes go from one jurisdiction to the other," Bryant said.

Both the mayor and interim chief addressed the issue of low officer morale and an increase in retirements or officers otherwise leaving the force. They said they had seen a spike during the summer but that it was leveling off, and Byrant said some officers who'd left had already returned, or sought to return, to APD.

"In conversations with other major departments, looking at attrition rates, many of the major departments in major cities are seeing some of the same incidences," he said. "But I think the City of Atlanta is coming to a level of resolve a bit quicker."

Bottoms did not address Bryant's continuing interim title, but said he was a born and raised son of the city who "knows and understands the nuances and complexities of our community" and that she has confidence in his leadership.

The mayor said last month that many major cities were conducting searches for police chiefs amid difficult circumstances, and said then Bryant was being evaluated to "determine if he's the one that we want to continue with as our permanent police chief."

Bryant sounded an optimistic note Wednesday as he works to put the city back on calmer footing. He said he would begin having meetings next month with advisory committees that will work with all six police zones to "come up with better ideas, strategies, and solutions to address crime and issues that you may find unique to your area or your neighborhood."

"We are really moving in the right direction as it relates to how we are addressing public safety in the City of Atlanta," Bryant said. "We can really work together as one unit, one Atlanta, one APD to solve the problems of this city."