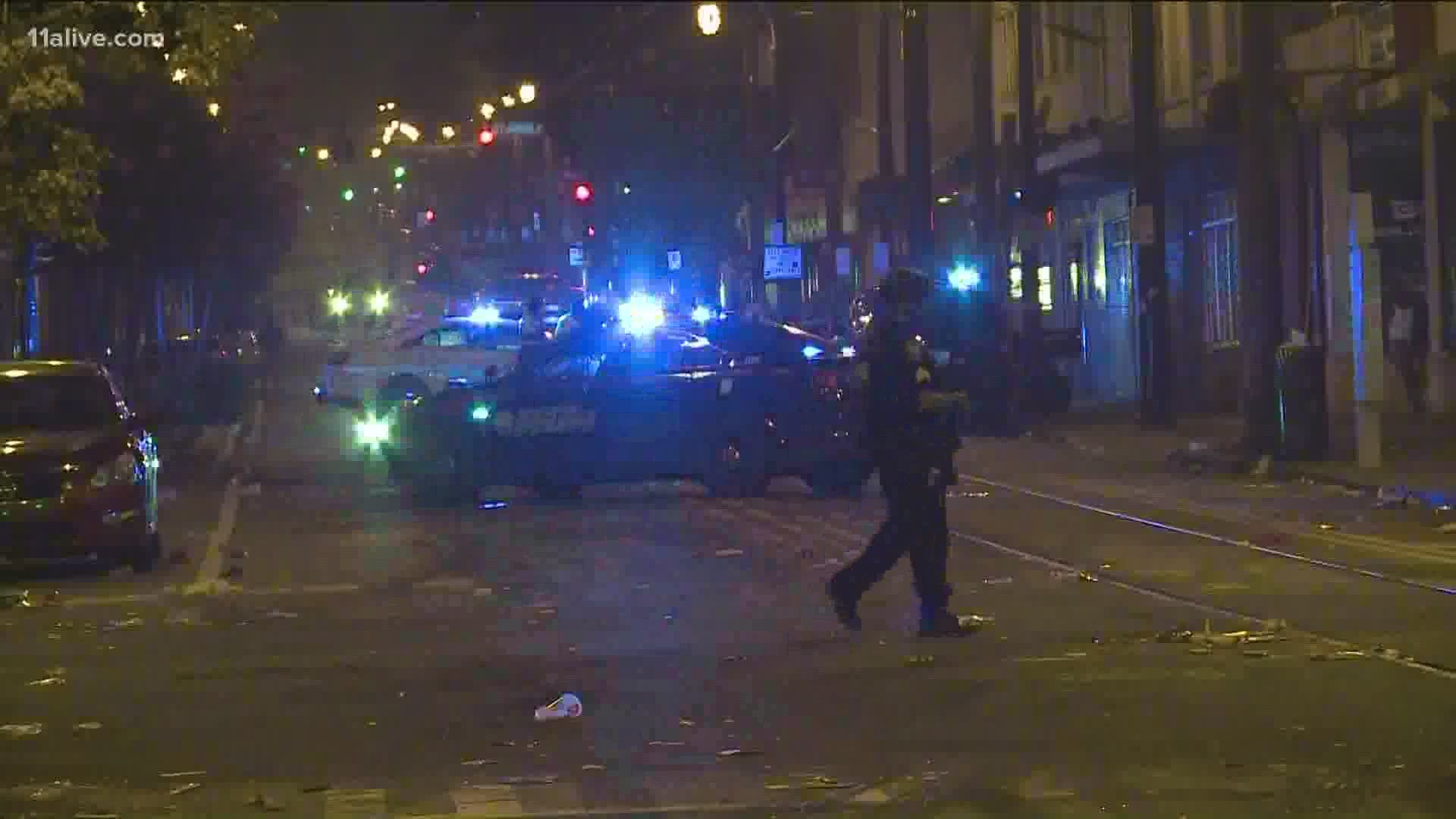 ATLANTA — The night following Independence Day turned out to be a very violent one in the city of Atlanta.

While fireworks were going off in the skies over the city, Atlanta Police were busy investigating multiple shooting calls which left an 8-year-old girl dead and people wounded all over parts of the city.

According to Atlanta Police Sgt. John Chafee, 23 people were shot and wounded during the overnight hours of Saturday night, July 4, and early morning hours of Sunday, July 5.

In addition, an 8-year-old girl was shot and killed in an incident on Pryor Road at University Avenue on Saturday night, Chafee said.

He said police were called just before 10 p.m.

According to Chafee, the caller said the child had been shot and was being taken by private vehicle to Atlanta Medical Center.

According to Chafee, the preliminary police investigation indicates that the girl was riding in a vehicle with her mother and an adult friend when they exited Interstate 75/85 onto University Avenue.

Chafee said the driver tried to enter a parking lot in the 1200 block of Pryor Road when he was confronted by a group of armed people who had blocked the entrance.

During the confrontation, Chafee said, the group opened fire on the vehicle, striking it multiple times, and hitting the girl inside.

Chafee said the driver then drove to Atlanta Medical Center for help.

He said that homicide investigators are working to determine the circumstances surrounding the shooting and to identify the suspects as their ongoing investigation continues.

The shooting occurred just a short distance from the Wendy's where Rayshard Brooks was shot and killed by Atlanta Police on June 12.

At about 11:30 pm on Saturday, Chafee said, a male and female were both shot and wounded in an incident in the 1500 block of Hardee Street in northeast Atlanta's Edgewood neighborhood.

When officers arrived, Chafee said, they found the two people, but said they would not provide officers with infromation about what had happened.

They were both transported to Grady Memorial Hospital in stable condition for treatment of their injuries.

The preliminary police investigation indicates that the two victims had confronted a group of people who were setting off fireworks in front of their home.

At some point, shots were fired and the victims were both struck, Chafee said.

He said that investigators are working to identify those involved in the incident as well as the circumstances surrounding the shooting.

Chafee said investigators plan to speak to the victims to confirm their information. The police investigation remains ongoing.

At 11:45 pm, Saturday, according to Chafee, officers responding to a person shot call in the 1600 block of Lakewood Avenue in the southeast Atlanta neighborhood of Lakewood Heights found that five people were shot and wounded.

Chafee said that according to their preliminary police investigation, a group of people were standing at the location when someone drove by and fired multiple rounds at the group.

According to Chafee, the five people were taken to local hospitals, all in stable condition.

He said that investigators are working to determine the circumstances surrounding the incident and identify everyone involved in the incident.

Chafee said a male was shot during another incident at about 12:50 a.m. on Sunday.

In that incident, he said that officers responded to a person shot call in the 400 block of Edgewood Avenue, SE in the city's Sweet Auburn District.

According to Chafee, the preliminary police investigation indicates that the victim had confronted another male who was talking to his girlfriend. Chafee said the two got into a fight when the victim noticed that the other male had a gun on him.

Chafee said it appears that several people tried to grab the gun and it went off, hitting the victim in his arm.

The victim was transported to Grady Memorial Hospital in stable condition, Chafee said.

He said that investigators are still working to determine the circumstances behind the incident.

Two people were hospitalized in critical condition and 12 others were reported in stable condition following a shooting in the 200 block of Auburn Avenue, NE, just west of the Downtown Connector, at around 1 a.m. Sunday, Chafee said.

Chafee said that the preliminary investigation indicates that a large group of people was located there watching fireworks.

He says that at some point, a vehicle struck a pedestrian, which led to an altercation between a number of people there.

The altercation escalated into shots being fired by multiple people, Chafee said.

Atlanta Police Homicide Investigators are conducting the investigation, according to Chafee. He says they are working to identify everyone involved in the incident and to determine the exact circumstances surrounding the shooting.

Chafee said that one other person was shot in the leg early Sunday.

He said officers were summoned to Atlanta Medical Center South at about 4 a.m., regarding a person shot call.

According to Chafee, the preliminary police investigation indicates that the victim was shot in the leg while near the corner of Etheridge Drive and 7th Street in Northwest Atlanta's Carey Park community.

Chafee said the victim was not being cooperative with investigators. He says they are still working to determine the circumstances surrounding this particular shooting.

As in the other incidents, Chafee said, the police investigation remains ongoing.

Juvenile shot near Downtown Connector dies from injuries at hospital

TPD mourns life of officer killed in the line of duty