Mothers. Army veterans. Business owners. Newlyweds. These are the victims of the Atlanta spa shootings

Friends and families remember the eight lives lost, and some share ways you can help them during this difficult time. 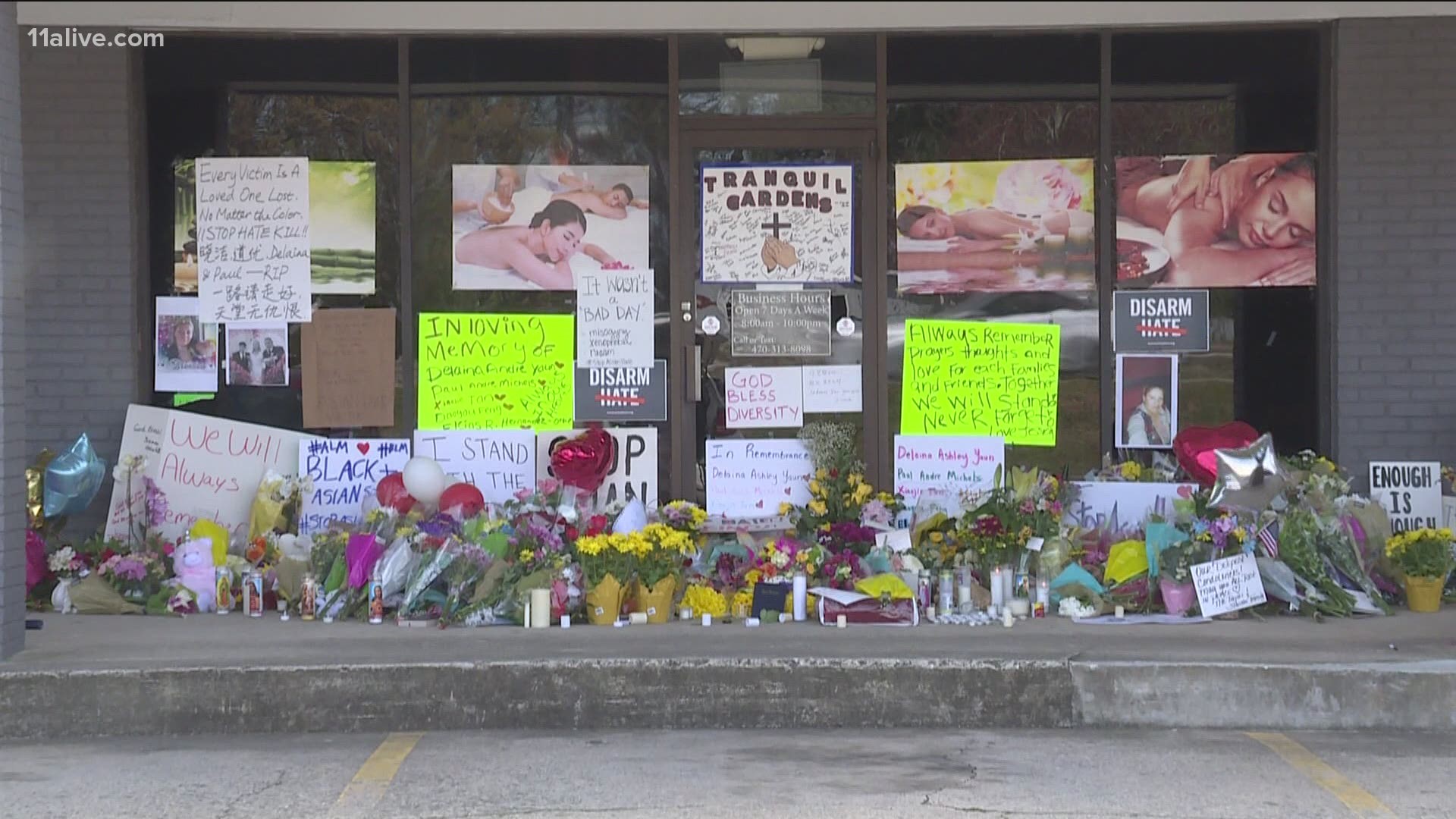 CHEROKEE COUNTY, Ga. — It's been one week since eight people were shot and killed in three Georgia spas, and each day we learn more information about the victims.

Flowers and photos outside of the spas grow day by day, similar to the growing number of donations to the victims' families.

Here's what we know about each of them and how you can help them.

The victims from the Youngs Asian Massage Parlor shooting in Cherokee County:

Delaina Yaun was at the Cherokee County spa on a date with her husband when she was killed.

She had just gotten married in August and leaves behind a 9-month-old little girl.

Her friends and family said her two kids and her husband were her world.

"It's like she had a light that followed her around," one said. "Everyone was drawn to Delaina."

Her funeral was Tuesday.

The online fundraising page for her family has exceeded at least six times its goal.

Paul was in the Army, and served in West Germany and Fort Knox, Kentucky between 1985 and 1989. He was married to his wife, Bonnie, for more than 20 years.

He came from a large family of nine, where Paul was the seventh-oldest. His brother, John, was eighth. While they were born two-and-a-half years apart, John said they were very similar, physically and personality-wise.

"He loved history," John said. "My most favorite political commentator is no longer here. It will be hard on me."

Their oldest sibling, Michelle, passed away from cancer in 2014. Paul loved history, coin collecting and talking about politics.

"Very good-hearted man," he remembered. "Generous and kind and caring. He would have to talk to me about - because sometimes I'm a little more abrasive than he is. So he would coach me."

His friend Kikiana said Paul and his wife Bonnie were growing closer to the owner of the spa and were like an "extended family," who would occasionally have dinner together.

His brother said he may have also been speaking with the spa's owner, as he had been thinking of opening a spa himself.

He says he believes Paul was working on the spa's security system when he was shot and killed.

According to public records, Xiaojie Tan was the registered business owner and manager of Young's Asian Massage.

States away, Xiaohua Pettit, mourns her friend of 16 years. She told 11Alive about the moment she heard the story on the news and wanted to see if her friend was okay.

Xiaohua moved to the United States in 2005 after managing a bank in China for many years. When she moved to the U.S., her husband Gary said she didn't feel comfortable finding a job at a bank because of her language skills.

Xiaojie Tan took her under her wing and taught her about nails.

"It broke my heart," Xiaohua said about hearing the news. "Every time we talking about her, I want to cry. So, this morning I still cried."

Xiaohua said what united them, even more, was that they were both from Nanning, China, and moved here to start a life with their significant others.

Gary added that he believes this was, in fact, a targeted crime.

"When it hits home, you can't ignore it," he said. "This is a prime example of a mixture of some serious mental health issues, but I also think it's absolutely race-driven."

Tan was a mother, a business owner, and a hard worker who sent money back to China to help take care of her parents.

Gary said Tan used to work six days a week, with many 12-hour days. They said she will be missed terribly.

"I believe she was a very strong person," Gary said.

"She was happy, too," Xiaohua added.

"Oh yeah, she never complained. She always had a smile," Gary continued.

Feng had just started working at the spa, according to the New York Times. A longtime customer of hers said she was sweet and kind.

The victims from Gold Massage Spa off Piedmont Road:

Park was the oldest of the eight victims. According to the New York Times, Park was close to her relatives, many of whom lived in New York and New Jersey.

Her two sons describe her as a hardworking and dedicated single mother.

"She was one of my best friends and the strongest influence on who we are today," one of her sons wrote.

With the rest of their family in South Korea, the brothers said they are now left to figure everything out, including a new living situation.

"Losing her has put a new lens on my eyes on the amount of hate that exists in our world," her son explained in the original post.

After seeing the outpouring of love, support and the more than $2.8 million raised, the brothers shared an update thanking people for donating, sharing, and providing hope.

"To put it bluntly, I can't believe you guys exist," one of the brothers wrote when explaining their gratitude.

They said the money will be used to lay their mother to rest, and help them rebuild their lives and take care of day-to-day needs.

"Thank you everyone, and please share whatever care and kindness you have shown here to anyone you know that feels scared or unsure about the world we live in," said the brothers.

Some of the more than 6,000 comments describe her as beautiful and strong-willed.

Kim leaves behind two children. An online fundraising page was organized on behalf of her granddaughter, Regina Song, and her family.

In a post written on the page, Song described her grandmother as "an angel." The page also said she immigrated to the United States from Seoul, South Korea with little English and worked two to three jobs.

“As an immigrant, all my grandmother ever wanted in life was to grow old with my grandfather, and watch her children and grandchildren live the life she never got to live,” she wrote.

The post also says she was a “fighter,” Song wrote, and would call her granddaughter on the phone once a week to tell her, “Stay strong in life ... when you’re happy, I’m happy.”

The funds will be used by the family to pay for Kim’s funeral and memorial expenses.

The victim from Aromatherapy Spa off Piedmont Road:

She was a mother of two who loved Korean Karaoke and had a weekly ritual of making a traditional Korean dinner, something her sons wrote they will miss on their fundraising page.

That's also where we learned she "was always kind-hearted and willing to help everyone she encountered."

“Mom was an amazing woman who loved to introduce our family and friends to her home-cooked Korean food and Korean karaoke,” family wrote on a GoFundMe page organized to cover the family’s immediate expenses following Yue’s death.

The donations will be used to cover travel expenses for the memorial service, organizing Yue’s affairs and covering the funeral costs.