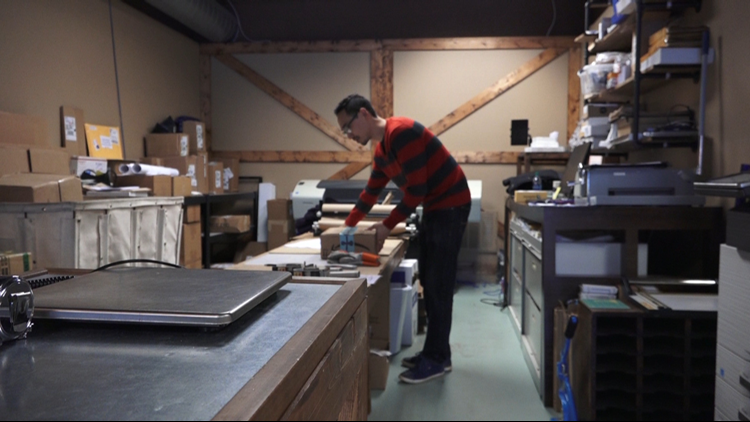 Photo by: 11Alive
Allen Kim sorts through mail looking for suspicious packages at his multi-use business Edwin Jarvis which has a full mail room.

Behind the Headline: Weeding out suspicious packages in the mail room

That feeling of excitement when you get something in the mail is turning into fear after several investigations into mailed pipe bombs and anthrax.
Author: Christie Ethridge
Published: 10:49 AM EST November 12, 2018
Updated: 11:31 PM EST November 15, 2018

It's supposed to be a happy thing: seeing your name on a package with a surprise inside. But after the U.S. Post Office discovered more than a dozen pipe bombs mailed to critics of President Trump, the word surprise has taken on a whole new meaning.

So, we went into a mail room to find out how workers screen packages before they get to your door.

"It really puts a fear in something that should give you joy," business owner Allen Kim said. "It put everyone in the industry on high alert.

Kim runs a multi-use space that has a full mail center where the customer can pick his way to ship.

He was the only one, out of 15 centers we contacted, to let us in to see how screening and sorting mail works.

If a suspicious package comes across his mail room, Kim says he doesn't move the package.

"We move ourselves, and we contact the right person," he said.

He says it's impossible to screen every single package, but identifying the suspicious ones "is pretty obvious."

He says it comes down to shape, look, address, and packaging. There's a checklist by the sorting counter in case a worker needs a refresher.

"If you have packages that are overly taped, excessive postage. No one wants to spend more than they want to," he said. "If it's lopsided, if it's irregular."

Kim says they have an advantage as a neighborhood shop. Someone who's trying to do no good would stick out like a sore thumb, but they still take precautions like wearing gloves and looking out for weird stains and odors.

He says that process is working.

"It's just through experience. After so many packages come through, things do just visually stick out," Kim said.

Going into the holidays, he hopes mail brings nothing but joy.