Marion Wilson Jr. died by lethal injection in connection to the murder of Donovan Parks.

JACKSON, Ga. — A Georgia man convicted in the killing of an off-duty prison guard more than two decades ago has died, officials confirm.

Marion Wilson Jr. had been scheduled to receive a lethal injection Thursday. Wilson and Robert Earl Butts Jr. were convicted of murder and sentenced to death in the March 1996 slaying of Donovan Corey Parks. Butts was executed in May 2018.

Authorities have said Butts and Wilson asked Parks for a ride outside a Walmart store in Milledgeville and then fatally shot him with a sawed off shotgun a short distance away. The pair then stole Parks' car.

Read up on the case here.

The Georgia Department of Corrections confirms that the execution of Marion Wilson Jr. was carried out at 9:52 p.m. following an injection of the sedative pentobarbital at the state prison in Jackson.

The department says Wilson accepted a final prayer and recorded a final statement before being executed by lethal injection, the 51st inmate to die as such in the state.

11Alive's Jeremy Campbell said Wilson's gave a final statement declaring that he never killed anyone. He also repeated the words "about to be free" as the lethal cocktail was was administered.

The U.S. Supreme Court has rejected a request to halt plans by the state of Georgia to execute an inmate for a 1996 shotgun slaying.

The lawyers for 42-year-old Marion Wilson Jr. had asked as the scheduled 7 p.m. execution time approached that the nation's high court block Georgia from carrying out the death sentence so that a lower court decision rejecting Wilson's claims could be reviewed.

The Supreme Court said in a brief statement late Thursday that the request for a stay had been denied.

The news silenced many gathered around the gates, while Tykecia Wilson cried out in pain.

The daughter of Marion Wilson Jr., Tykecia, spoke to 11Alive, saying, "I love my Daddy from the bottom of my heart. And I’m so sorry he’s going through this. I’m sorry to all of the other families that are suffering through this too."

A friend of Marion Wilson says if he had not ended up behind bars or been sentenced to execution he would have wanted to be a counselor for others. He says Marion was a gentle man, and he’s glad he got to know him.

11Alive's Jeremy Campbell, who is a media witness to Wilson's execution, has climbed into the van that will take him to the execution room.

A Public Relations Representative for the prison has just told 11Alive's Atticus team that Marion Wilson Jr. has accepted a sedative.

Demonstrators are beginning to arrive outside the prison, protesting the death penalty.

They also gathered to recite the Lord's Prayer and sing Amazing Grace.

Wilson has declined to make a final statement and is halfway through his final meal. Friends, family, clergy and attorneys have visited him.

The schedule for execution day has been made public.

The Georgia Supreme Court has rejected two court challenges by a death row inmate and declined to stop his scheduled evening execution.

The State Board of Pardons and Paroles held a closed-door clemency hearing Wednesday and denied clemency Thursday morning. The board is the only authority in Georgia that can commute a death sentence.

Around the same time, Wilson’s final meal request arrived. Prison officials say he ate about half of that before declining to record a last statement.

The Georgia parole board has denied clemency for a prisoner scheduled to be executed Thursday for the killing of off-duty prison guard Donovan Parks more than two decades ago.

Lawyers for a Georgia man set to be executed are asking the state parole board to spare his life, arguing that he didn't cause the death for which he was condemned.

Wilson's lawyers say in a clemency petition made public Monday that a prosecutor told jurors during his trial that Wilson fatally shot Donovan Parks despite believing Butts was the triggerman. 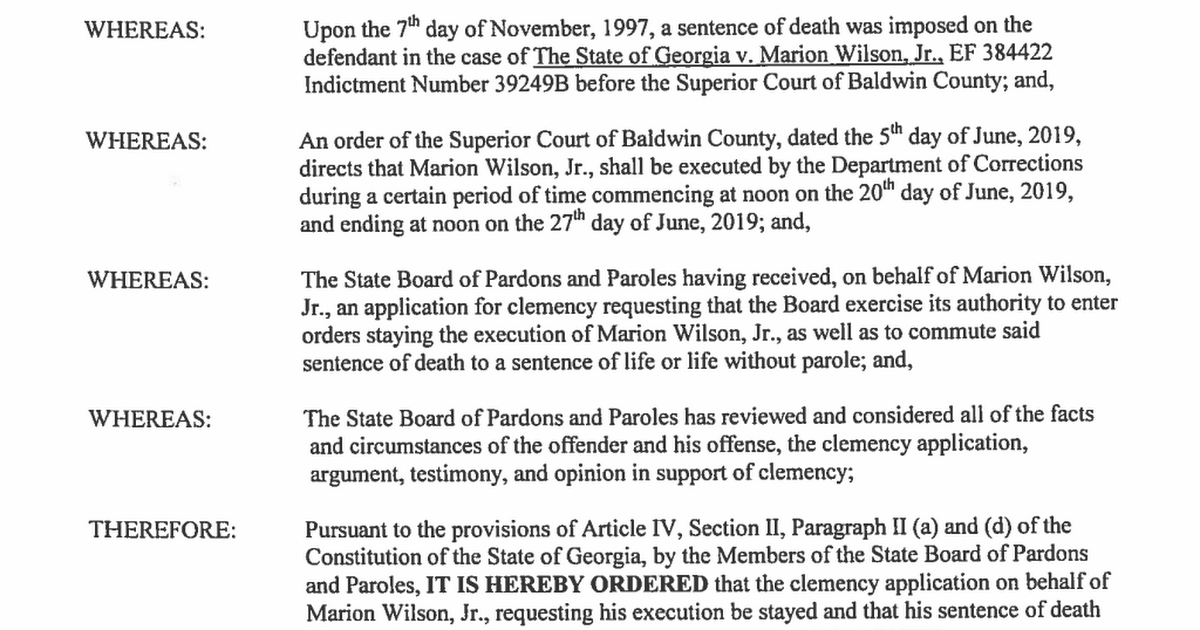 For Parks' family, the wait for justice has been 23 years in the making.

In an interview with the Associated Press, Parks' brother Christopher said while the execution won't bring Donovan back, "what execution does is it offers a starting point for myself, my dad, our family, to finally get some sort of closure and to start healing."

Credit: AP
In this Friday, June 14, 2019 photo, Chris Parks poses with a portrait of his brother Donovan Corey Parks in Powder Springs, Ga. Marion Wilson Jr. and Robert Earl Butts Jr. were convicted of murder and sentenced to death in the March 1996 killing of 24-year-old Donovan Corey Parks. Butts was executed in May 2018. Wilson, who’s 42, is set for execution Thursday, June 20. (AP Photo/Andrea Smith)

Wilson will be the 51st inmate put to death by lethal injection. There are currently 47 men and one woman on death row in Georgia. Among the witnesses to the execution will be 11Alive's Jeremy Campbell.

The State Board of Pardons and Paroles has scheduled a closed-door clemency hearing for the 42-year-old Wilson on June 19.

State Attorney General Chris Carr announced in a news release that 42-year-old Marion Wilson Jr. is scheduled to die on June 20 at the state prison in Jackson. Wilson and Robert Earl Butts Jr. were convicted of murder and sentenced to death in the March 1996 slaying of Donovan Corey Parks.

Butts was executed last year. Wilson would be the second prisoner executed in Georgia this year and the 51st inmate to die by lethal injection in the state.