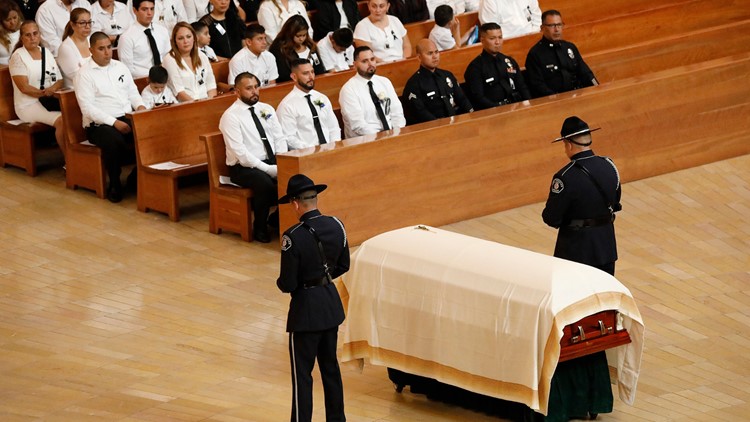 Photo by: AP
Officers flank the casket of slain Los Angeles Police Officer Juan Jose Diaz during his Funeral Mass at the Cathedral of Our Lady of the Angeles Monday, Aug. 12, 2019 with Archbishop Jose H. Gomez presiding at the bilingual Mass. (Al Seib/Los Angeles Times via AP)

LOS ANGELES COUNTY, Calif. — A young Los Angeles police officer gunned down while off duty at a taco stand was memorialized by his chief for his big smile, bright mind and devotion to public service.

Hundreds of fellow officers packed the Cathedral of Our Lady of the Angels on Monday to honor Officer Juan Jose Diaz.

The 24-year-old officer was shot July 27 after confronting a man spray-painting gang graffiti on a wall. Diaz had been hanging out and eating tacos with his girlfriend and her two brothers in the Lincoln Heights neighborhood.

Diaz will be remembered as someone with humility and sharp sense of humor who "continually strove to help others," Moore said.

The officer's family and friends wore white and were seated in the front pews of the downtown cathedral, where Los Angeles Archbishop Jose Gomez presided over a bilingual Mass.

RELATED: CHP officer killed in shootout on the 215 freeway in Riverside identified

His sister, Anahi Diaz, said her brother had wanted to be a police officer since he was 5 years old. She laughed as she remembered him eating cereal out of a Los Angeles Dodgers batting helmet and singing country music — "and not very well."

A hearse arrived at the cathedral with a police motorcycle escort. After the service, the casket was escorted for interment at Forest Lawn Hollywood Hills cemetery.

Diaz had been on the force for two years and was assigned to the police department's Professional Standards Bureau, which conducts investigations into department personnel.

He was shot as he and his group tried to drive away to avoid a violent confrontation, investigators said. One of his girlfriend's brothers was seriously wounded but is expected to recover.

Two men and a woman were arrested Aug. 2 in connection with the killing. They were identified as Francisco Talamantes, 23; Cristian Facundo, 20; and Ashlynn Smith, 18, police said. They're due in court next month on multiple charges including murder with a gang allegation, prosecutors said.

It wasn't immediately clear whether the defendants had obtained lawyers.

Detectives said the shooting occurred during a two-hour series of crimes by gang members that included another attempted shooting nearby where the targets were unhurt.

Diaz is the second off-duty officer killed in the Los Angeles area in recent months. In June, Los Angeles County Sheriff's Deputy Joseph Gilbert Solano was shot at a Jack in the Box restaurant in the suburb of Alhambra.

The suspect, Rhett Nelson of Utah, is also charged in the killing of professional Russian snowboarder Dmitry Koltsov. Authorities have said that the killings of Solano and Koltsov are believed to be random. Nelson has pleaded not guilty in both cases.