ATLANTA -- Violent crimes committed by juveniles are on the rise throughout metro Atlanta, according to the Fulton County District Attorney's office. 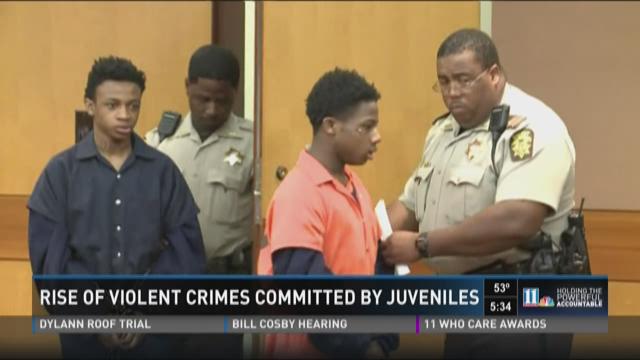 ATLANTA -- Violent crimes committed by juveniles are on the rise throughout metro Atlanta, according to the Fulton County District Attorney’s office.

In fact, statistics show the juvenile crime rate in Fulton County is 15 times higher than the national average.

It's a troubling trend, underscored recently by the murder of Anthony Brooks. The 50-year-old was outside a gas station in southwest Atlanta last month when police say he was gunned down by two young suspects.

Residents of the community who knew Brooks told 11Alive then he was the kind of person who would always lend a helping hand.

A few days after his murder, the two teens suspected in the shooting turned themselves in. According to authorities, 15-year-old Isaac and 16-year-old Charlie McDaniel were no strangers to law enforcement. The McDaniel brothers had 30 prior arrests and 100 interactions with the Atlanta Police Department.

“They should not have been on the streets,” said Fulton County D.A. Paul Howard, during an interview with 11Alive’s Brenda Wood. “We in this system should have put in some intervention for these children.”

Howard was in studio to discuss the rise in crime and an upcoming town hall meeting that aims to address problems in the juvenile justice system.

“We’re hoping that they can get this mental incompetency law changed. There’s got to be a facility someplace where these kids are placed,” Howard said. “If a child is in trouble, why isn’t our community – why isn’t our system forcing some kind of intervention?”

Howard and several other legislators will be discussing those issues and more Wednesday night at the Juvenile Crime & Our Community Town Hall meeting. 11Alive’s Brenda Wood will be a moderator for the meeting, scheduled for 6 p.m. at the Cascade United Methodist Church at 3144 Cascade Road SW.