Clare Schexnyder wants students and teachers across the country to leave their classrooms together on March 2. 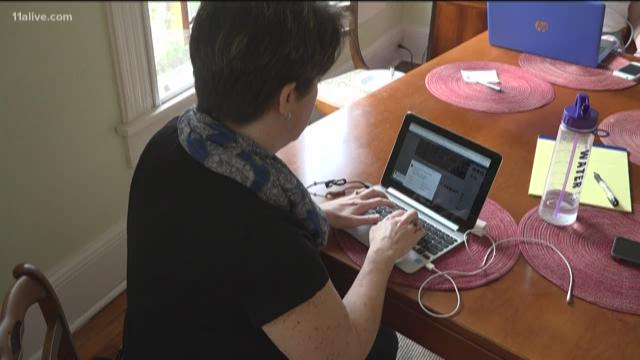 DECATUR, Ga. - A local mother is leading a national movement to try and stop gun violence in schools by organizing a walkout.

Clare Schexnyder wants students and teachers across the country to leave their classrooms together, to protest every child and educator who has been killed in a school shooting.

Clare's Facebook group started after watching videos of the Parkland shooting on the site.

“I sat at my computer and I watched kids screaming,” she said. “There is video inside the school. SWAT teams coming in to our classrooms, and I just thought, I can't do that anymore. I can't see that.”

She started a secret Facebook group called Stop School Shootings to connect with other moms who want a real change.

“This isn't a political issue, this is a societal issue,” she said. “And I think gun owners can agree that our kids need to stop being slaughtered in the classrooms.”

She had an idea: What if students across the country all walked out of school at the time, with their hands up, to protest the mass murders in America's classrooms.

She wants the kids to surround the school, standing in a circle, leaving their backpacks on the ground to symbolize the children who have died in school shootings.

They planned the walkout for March 14 at 10 a.m. eastern. But she says that's just the beginning for this group of moms who want something different for their children.

“I thought, I can do something, I'm not powerless, I can make a change.”

Schexnyder’s effort comes in the wake of Wednesday’s mass shooting at a Parkland, FL, high school, in which 17 people, including teenagers, were shot to death after an alleged rampage from Nikolas Cruz, 17. He is being held without bond.

Here is the full text of Schexnyder’s latest message:

"We're organizing a national school walkout on Friday, March 14 at 10am PST/1pm EST. We ask that all students, teachers, administrators and parents walk out of local colleges, universities, high schools, middle schools, elementary schools and pre-schools (private and public).

"Parents can come to the school and join their children for the walkout -- or send in a permission slip to allow their child to participate in the event that will be chaperoned by parent volunteers.

"All students will walk out at the designated time, and we'll circle around the school and quietly put our hands on each others shoulders. Much as our kids' do now as they are marched out of school after a shooting. We'll line up in front of the school and have kids lay down their backpacks to symbolize the many children killed in school shootings so far.

"After the walkout, Kids and teachers can return to class.. OR.. parents can take their kids out of school and we'll meet at a local city or state government building for a march/gathering at 12pm PT/3pm ET.

"We all can agree on this. Even gun owners. It's time for the killing to stop. In our schools, at our concerts, in our movie theaters. It has to stop and WE CAN ALL come together to make our schools safe. We will use one voice and have one movement. We are NOT Powerless. WE can do this. YOU can make a difference. Join us!

"This is NOT a partisan issue... it's a societal issue. We have to stop the carnage. We have to come together with one voice and one movement to ban assault weapons. The time is NOW. This must change today. #march2stopschoolshootings"