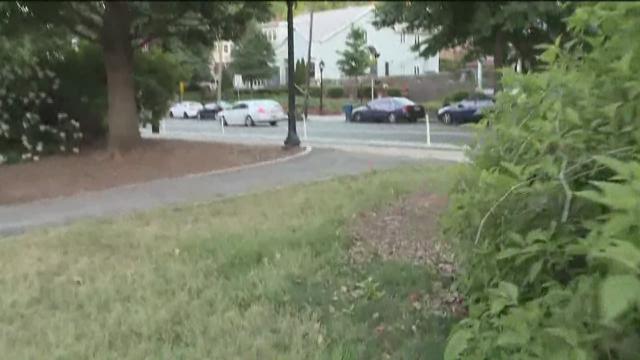 The Atlanta Police incident report states that at about 11 p.m. the reporting officer, identified only as Officer Snell, was in an area of Piedmont Park along 10th Street, NE, known for sexual acts after dark, when he spotted the suspect, later identified as Mann. The officer stated that he saw Mann feeling his penis through his pants, walking toward the officer.

The officer stated in the report that, at this point, Mann exposed himself and began making inappropriate motions. The officer said he hid behind a tree to prevent Mann from seeing the reflective tape on his City of Atlanta police bicycle.

As Mann approached, the officer confronted him by shining his flashlight and Mann fled. The officer said he identified himself as police and demanded the suspect stop but Mann didn't. After running across 10th Street to a residential area of Midtown, and then turning down Argonne Street, Mann finally surrendered and was taken into custody on 9th Street, about a quarter of a mile from where the officer says he first encountered Mann.

During the walk back to the patrol car, with Mann in handcuffs, the officer says Mann asked him to call the officer's supervisor, and Mann identified the police supervisor as a Major Peek. However the officer countered that Peek was not his supervisor. Mann still wished to speak with a supervisor and, upon reaching the Atlanta Police Precinct at CNN headquarters, downtown, Mann was allowed to do so.

The Atlanta Police Department declined to comment on the arrest, saying that it is an ongoing investigation. Mann bonded out of the Atlanta city jail. Both charges against him are misdemeanors.

The DeKalb County Sheriff's Office released a statement on Sunday that read:

"DeKalb County Sheriff Jeffrey L. Mann was arrested last night, May 6, 2017, by the City of Atlanta Police Department on charges of indecency and obstruction. He is working with City of Atlanta to clear these charges."

Mann is DeKalb County’s 49th sheriff, and has served in the department for 10 years, including as chief of staff and as chief deputy.

According to the DeKalbLawyersAssociation.org, Mann was appointed to fill the remaining term of Sheriff Tom Brown, who resigned to run for Congress, in March 2014. In July 2014, Mann won a special run-off election with 76 percent of the vote to fill the remainder of Brown's term. Mann won election to a full, four-year term in November, 2016.