Atlanta police and the FBI are now investigating the killings of the 40-year-old woman and her dog. 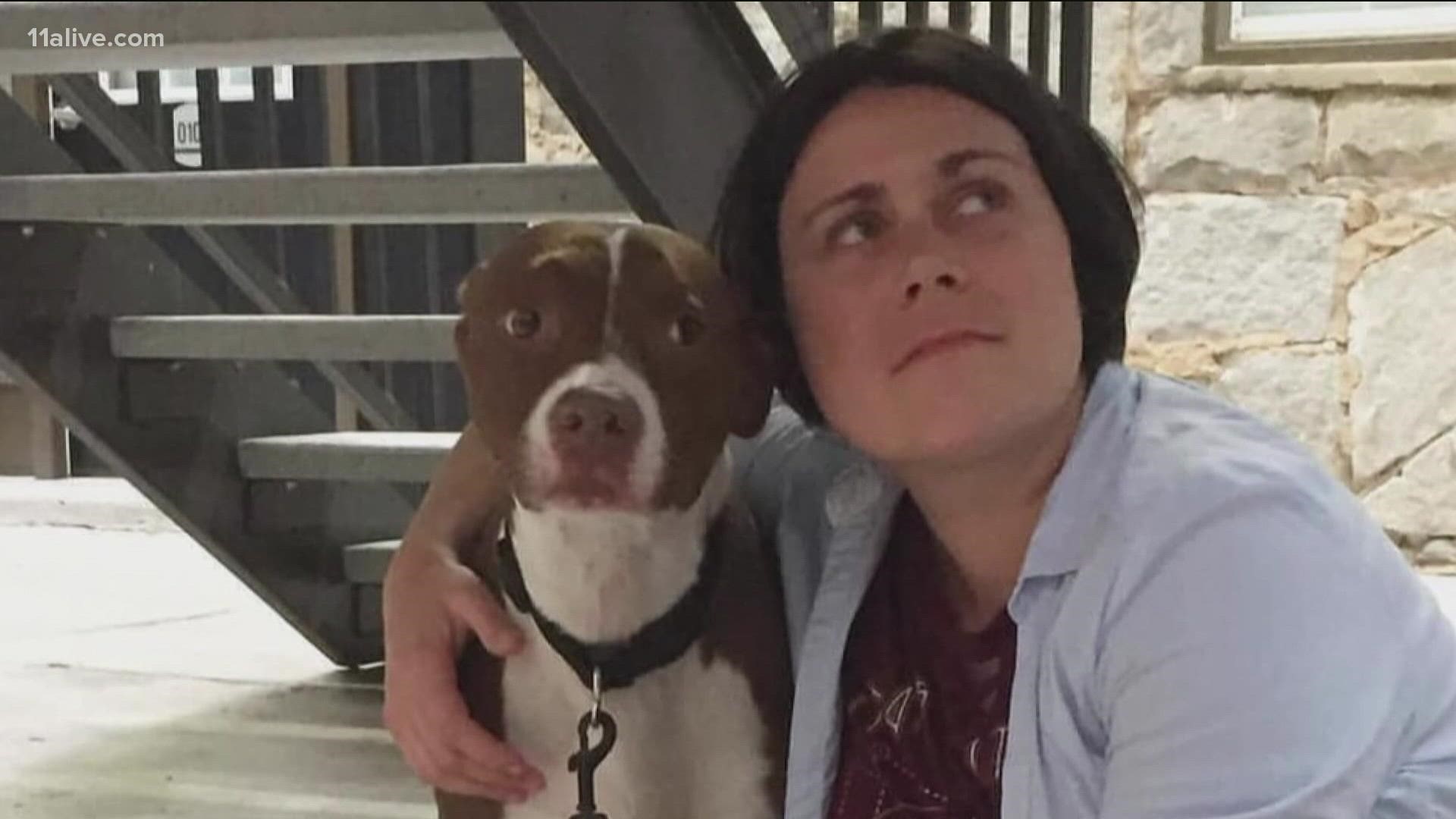 ATLANTA — Emma Clark, the wife of Piedmont Park stabbing victim Katie Janness, said "it's a little hard to describe" and "it's all pretty blurry at this point," as she told 11Alive about the moment she found Janness and her dog, Bowie, murdered in an attack that still has no known suspect.

Janness was found outside Piedmont Park, having been stabbed multiple times, according to detectives. Atlanta police and the FBI are now investigating the killings of the 40-year-old woman and her dog.

"The first thing I noticed is I saw Bowie," Clark explained. "He was visible from the gate of the park. He was maybe 50 feet from the gate on the inside and she was further on the right. I just ran in and I grabbed him because I didn't know, maybe he was still alive. Obviously, I knew something was wrong because he was just laying there. I didn't put two and two together because I didn't notice her right away."

Atlanta Police released audio to 11Alive of the 911 call from Clark the moment she found her wife and dog in the gruesome scene at the park. Clark is audibly weeping as she pleads with the 911 operator to send help. We are not sharing the 911 call out of respect for Janness and her family.

RELATED: Police want to speak to these people about Piedmont Park stabbing

Clark said she initially suspected Bowie, Janness' dog, was hit by a car as they sometimes go through the road area of the park. However, when she began calling for her wife she noticed Janness' body, "maybe 100 feet away."

"I ran up to her, I tried to feel for a pulse but it was clear that she was gone. I turned around and I just ran out of the park," she described. "It was dark, and I didn't know what was going on. I was terrified and shocked. That's when I called the cops immediately."

Public alarm, speculation, and unconfirmed comments surrounding the case continue to spread online, including some claiming that a serial killer may be on the loose in Atlanta after recent crimes in the metro area. However, have not indicated they believe there is a serial killer involved.

Clark expressed her frustration over these rumors, which have been disputed by authorities.

"I do agree with him (Atlanta Police Chief Rodney Bryant) about people spreading the false information or not necessarily false but unverified information," Clark said in regard to the recent press conference from Atlanta Mayor Keisha Lance Bottoms and the chief of police.

"I have talked with a couple of people online that are my friends that I've had to tell to stop doing it themselves. Just reading some of the things was very upsetting to me. I didn't want to have people hearing things, especially her friends and her mom, that we don't even know are true," she added.

But, Clark added that overall she didn't hear much from the press conference that she didn't already know about.

"I don't know if it shed more light, to be honest," she said.

"I spent like six hours with them that day and I've talked to the detectives a few times since then," she said. "I know they're doing the best. I want them to be able to do their jobs and do it the right way, and figure this out and make sure we have all the right information."

When asked whether or not the route by the park was normal for Janness to take, Clark explained that she took a few different ones when walking but she doesn't believe Janness ever had a direct plan that night.

Clark continued by saying she didn't think Janness was targeted and described her as not the kind of person who would get in a heated argument with someone.

"She didn't have a lot of people outside of her job that she would speak to on a regular basis besides her friends," Clark said. "I just thought, maybe it was somebody who saw an opportunity. That's all I can think, I honestly don't know."

Clark has now moved outside the city and the community she previously called home. For her, the memories are just too difficult.

"I've pretty much decided I'm probably not going back, to work in that area or live," she said. "I want everybody to be safe, as you never expect anything like this to happen to the people you love but I don't think it's best for me personally to be there."

But, Clark continues to find strength, through those around her and mutual friends of hers and Janness.

Clark also touched on Janness' family, who lives in Michigan.

"I can't really imagine how (her) mom's feeling. We've talked a little bit, I know it's been really rough for her. I think she tries to be strong when we talk because she doesn't want to upset me, even though she knows we're both hurting together," Clark added.

Atlanta Police Homicide Investigators released photographs of multiple people who they believe were in the area of Piedmont Park when Janness and her dog were killed.

If anyone was in the area around the time of the murder, authorities ask that they contact Atlanta Police Homicide Investigators or Crime Stoppers.