Four young Black men say the problems are not new and they want more resources to help break the cycle. 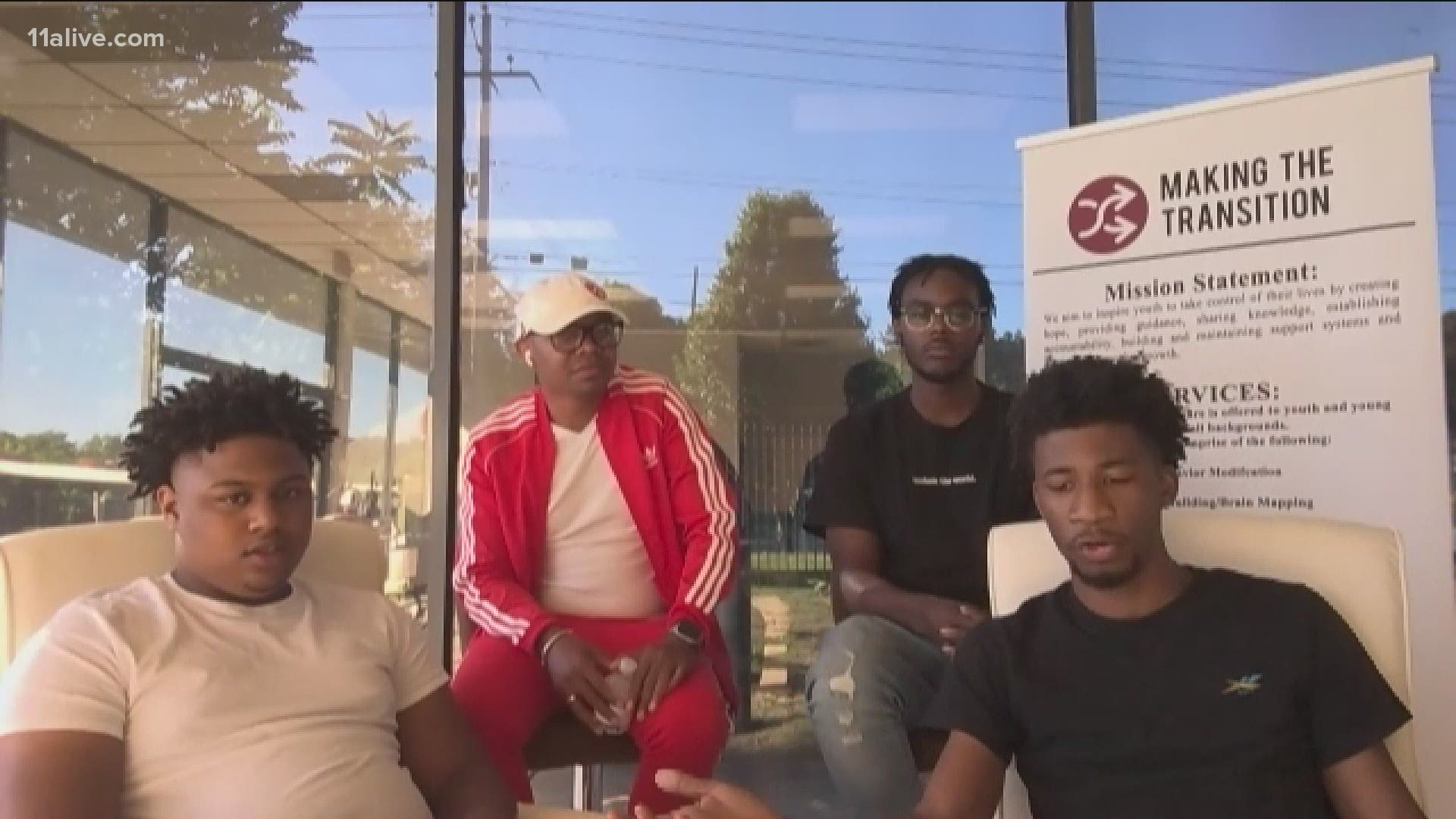 ATLANTA — Recently, several current and former city leaders addressed ways to curb violence in Atlanta. But, what about the people who grew up in the areas?

Four young Black men, from two different generations, talked to 11Alive, about what they feel their community needs to break the cycle of violence.

"Every day I get on Instagram and somebody died. It's crazy. And I feel like the pandemic shed a light on it," said 20-year-old Marcelous Franklin.

Franklin, joined by 21-year-old Tyrea Mathis, 20-year-old Jeremy DuPree, and Keith Strickland, owner of the non-profit Making the Transition, sat together in the community center on Campbellton Road. The same community center across the street from where a DoorDash driver was shot two day prior.

"I'm a DoorDash driver too, so that kind of hurt me when I heard that," said Franklin.

Strickland added, "So, it could have been this person who was shot just trying to provide and take care of his small child."

RELATED: He was delivering food for DoorDash when he was shot multiple times, police say

Strickland grew up in the neighborhood around Campbellton; where you can see young kids playing during the day and sometimes police sirens at night.

"When I was growing up, there were no nonprofit organizations like the community center we have here. I didn't have the resources. We didn't have anything like that. The violence is not new. It's just becoming a more shear issue, which is a blessing because children from this side of town deserve to be able to live and have the same comfort and the same opportunities and the same quality of life as children when you get 10 exits up I-75."

For Franklin, Mathis, and DuPress, who all grew up on, around or not too far from the area, they said they depending on mentors like Keith and community programs to make a better way for themselves.

"We need to open more programs like Keith did. (People) need to talk to us and teach us ways in life to get what we need in the correct way," said Franklin.

One of the things the young men said could make an impact on their community is intervention - and quick intervention. Especially, they said, with the water boys, seen selling bottles at intersections across the city.

At least one water boy was killed over a confrontation and another shot not long after the four men talked to 11Alive.

The Atlanta Police Department reports hundreds of 911 calls over fights and disorderly conduct.

Strickland said the "water" has changed over the years. For him, he sold drugs at a young age. For Franklin and Mathis, it was candy and water in their teen years.

One, a lack of guidance.

"It's not enough resources in the communities for people to get," said Franklin.

Mathis added, "Someone needs to be out here teaching them proper business tips and how to have some etiquette in selling. Now, it's all about money and competition."

Two, a lack of opportunities.

"A lot of stuff is closed. No more football practice, basketball practice, after school programs, going to school period. WiFi isn't great for a lot of people, so they can't even participate in their classes. And it's a situation of, you do what you see your peers doing. If a kid is out, bored, stuck in the community and another kid lights up a blunt or something, then everybody wants to do it. If they have more outlets, maybe kids won't be out there doing it," Franklin elaborated.

The third problem they see is a lack of understanding what they called the root problem; the reason some young kids feel they have to sell water to feed their families.

'When I sold candy as a teen, I saw it as, if I don't do this, I go home with nothing. That was my main motivation," said Mathis.

Strickland added, "Atlanta  is one of the best cities in the United States to live in but other communities in the city are one of the hardest places to survive in. If we get to the root cause, then maybe we wouldn't have the problems of them running in the streets to sell water like it's a third-world country."

"Some of them don't even realize, they're not a kid anymore. They have to be a hustler. Like, they're 13 years old trying to fill the shoes of a 25-year-old man for no reason. That's stress. I didn't have that stress on me when I was trying to sell candy," said Mathis.

The Atlanta city council passed a program to launch a water distribution program that would employ teens and community leaders like Keith are stepping up to hire them as well.

But, Keith also believes it will take putting more resources in the community that people can take advantage of.

"You can develop jobs on the north side, but if they can't get there, what happens? You can tell them we have resources, but how are they going to go online and fill out an application that they never had anybody teach them how to do that. So, we need to create real tools that reach them where they are that they can actually use."

Without those resources, going into the community to find out what the people who live there actually need, and mentorship, Strickland said the community is doomed to repeat the past.

"The problem is not how to get rid of the water boy. The problem is, how do we make the world so a young child doesn't develop into a person who has to be on the corner selling water. Because, you take that away and it will be the same people just doing a different thing if we don't address the core problem."