He is prohibited from ever working again as a law enforcement officer. 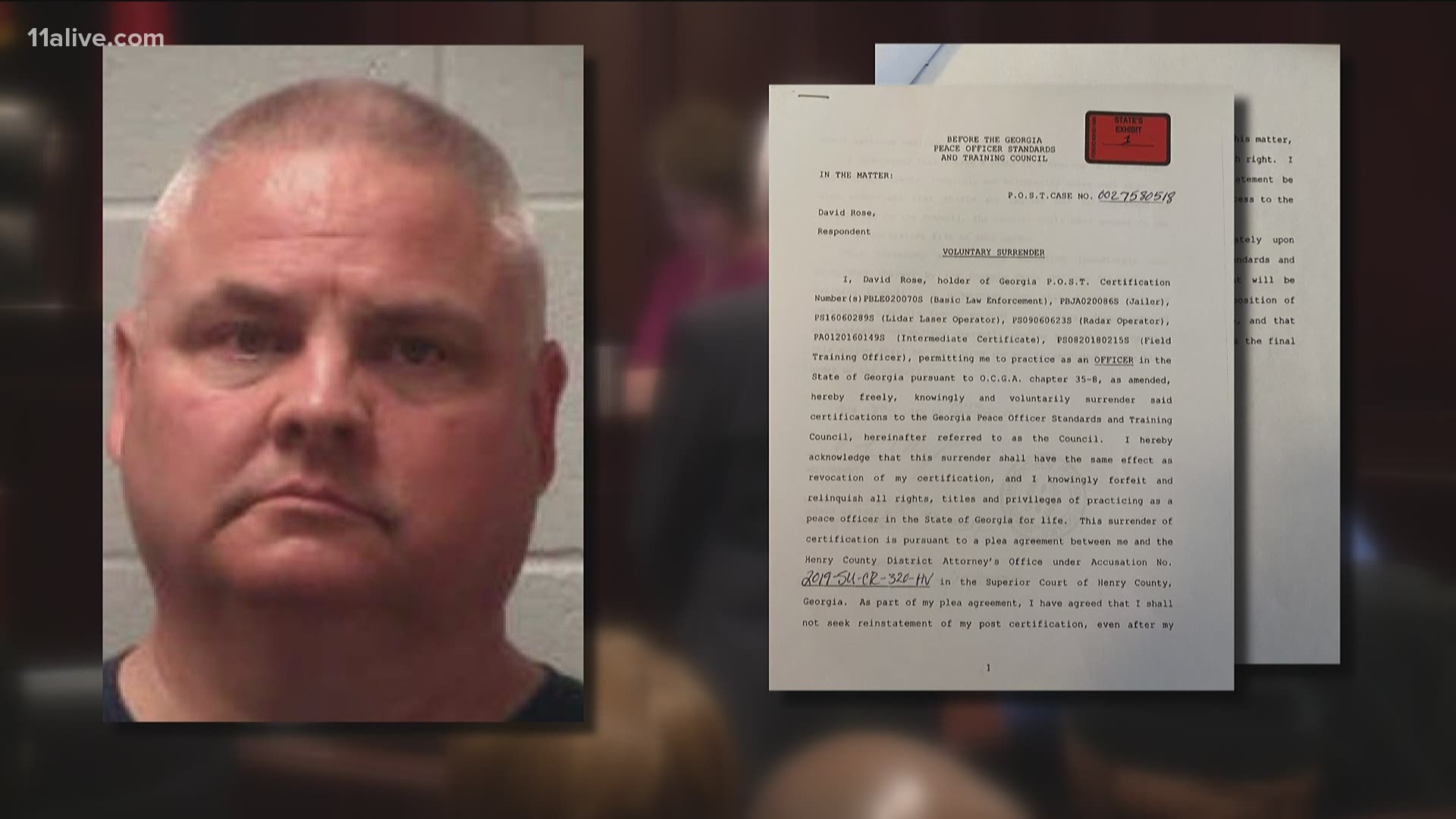 HENRY COUNTY, Ga. — The ex-Henry County police officer accused of choking a former NFL player during a 2017 traffic stop has pleaded guilty to the charges.

David Rose surrendered his law enforcement certification as part of a guilty plea to one count of simple battery after of choking Desmond Marrow on Dec. 2, 2017, the Henry County District Attorney's office said.

Rose must now serve 12 months on probation and must also complete an anger management class, perform 40 hours of community service and have no contact with the victim, the DA's office said.

With this guilty plea, Rose is prohibited from ever working again as a law enforcement officer, according to documents. He had been with the department for three years before being terminated in 2018, shortly after the incident.

RELATED: Ex-officer indicted in choking of former NFL player during traffic stop out on bond

“Through his revealing words and actions, David Rose tarnished the badge that represents all the honorable and brave men and women who serve in law enforcement. As a result of this plea, Rose will never work as a police officer again,” District Attorney Darius Pattillo said. “I am satisfied that he has been held accountable for his actions against Desmond Marrow.”

The incident, captured on camera, took place in a Target parking lot in McDonough. Rose responded when officers got a call that Marrow and the driver of another vehicle were driving aggressively.

Marrow would be arrested and charged with several felonies. Those charges would later be dropped in 2019, but not before they caused damage in Marrow's personal and professional life.

"I lost my wife. As a result of this situation," Marrow said. "I had a gym doing things I passionately love to do to train kids. I lost that because I had four felonies, so you know everyone became judgemental."

Rose was seen choking Marrow and grabbing his neck while he was handcuffed on the ground during the arrest.

NAACP Atlanta Vice President Gerald Griggs, who is also one of Marrow's attorneys, said the guilty plea is the result of a change in society.

"Because of the attention that has been garnered because of George Floyd, Breonna Taylor, Ahmaud Arbery, and Rayshard Brooks and so many others that it would have been futile for him (Rose) to try to convince a jury of anything other than what happened in this case," Griggs said. "So I think that is important for the public to understand because your voice is now being heard cases like Mr. Marrow's are starting to get justice."

In newly released dashcam video by attorney Chris Stewart, Marrow is seen sitting in the backseat of the patrol car while the two officers on scene, including Rose, talk about the incident. Rose is heard at the end of the clip saying he won't write it down, likely in the report, but he admits to choking Marrow.

"But for that video Desmond Marrow would be facing felony charges and would likely have been forced to take a plea or convinced to take a plea and sitting up in a prison right now," said Andrea Boyd, one of Marrow's attorneys.

"This is an example of sadly African-Americans typically only get justice by video and it just happens all too often," Chris Stewart, another of Marrow's attorneys added.

The former NFL player's legal team tells 11Alive they previously filed a civil lawsuit against Henry County and the officers present for Marrow's arrest. With the guilty plea now recorded they're hopeful they can soon reach a settlement in the civil case.

A Henry County Grand Jury indicted Rose last year with two counts of violation of oath by a public officer, and one count of simple battery, false official writings, and making a false statement. As part of the negotiated plea today, the felony charges were dismissed, the DA's office said.