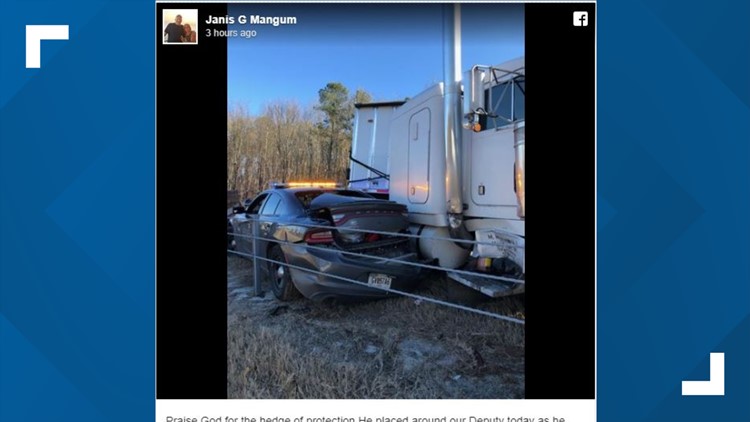 JACKSON COUNTY, Ga. — An east Georgia sheriff says she's thankful that her deputy has survived - and is able to speak with her - after his car was hit by a semi-truck.

Jackson County Sheriff Janis Mangum posted on her Facebook account that a deputy's car was hit on I-85.

"Praise God for the hedge of protection He placed around our Deputy today as he was hit by a jackknifed tractor-trailer on I-85," Mangum wrote.

RELATED: 'I’m lucky to be alive': Officer injured in crash explains importance of 'Move Over' law

She suggested, at first, that the accident was a result of the semi-truck driver not moving over for a deputy working along the interstate - something mandated by Georgia law.

"People wonder why the fine is so high," "she said. "Well it needs to be high. When you see blue lights, MOVE OVER!"

She later updated her comments to suggest that the driver was cited for driving too fast for conditions and not maintaining lane - suggesting that the driver wasn't in violation of the state's move over law but still driving dangerously.

At this point, she's asking the community to pray for the deputy - who isn't named in the post - as he continues to receive treatment at an area hospital.

"Thank you again Lord for taking care of our Deputy," Sheriff Mangum wrote.