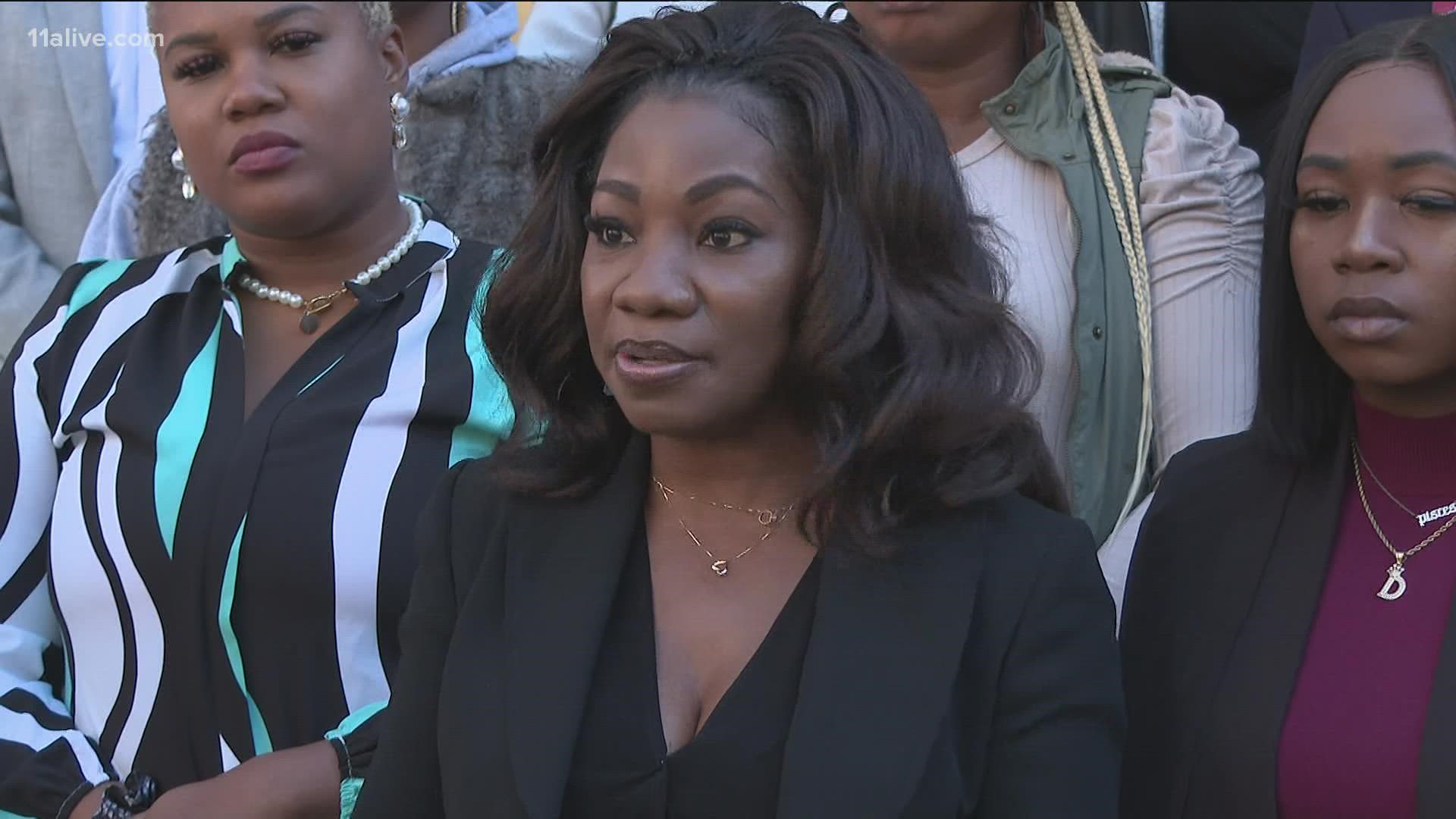 ATLANTA — Monteria Robinson and supporters stood on the front steps of the Fulton County Courthouse on Wednesday afternoon and shouted the name of Jamarion Robinson several times in celebration.

The most serious charge against each officer is felony murder.

11Alive has not received a response from inquires sent to the U.S. Marshal Service for more details about Heinze's current employment status while he faces felony charges.

Clayton County Police confirmed Wednesday that Hutchens is on "administrative assignment," but so far has denied 11Alive's requests for a department photo of the officer.

In follow-up inquires sent to the Clayton County Police Department, 11Alive asked for the department's reasoning for not releasing a photo of the officer. So far, no legal citation or explanation has been provided.

As of Wednesday afternoon, Fulton County court records didn't show any arrest warrants being issued yet for Heinze or Hutchens, and attempts to reach either officer for comment were unsuccessful.

In August of 2016, U.S. Marshals attempted to arrest Jamarion Robinson inside an East Point apartment on warrants out of Atlanta and Gwinnett County. Cell phone video from someone nearby captured nearly 3 minutes of gunfire during the incident.

The medical examiner's report would detail Robinson being shot 59 times and having 76 gunshot wounds.

Monteria Robinson on Wednesday said she had begged prosecutors since 2016 to have her son's case heard before a grand jury.

"I had to fight them. Like tooth and nail to get here," she said. "I have had to make personal sacrifices, I had to leave my job. I couldn't even travel and go to work."

When the Fulton County District Attorney's Office finally presented the case on Monday and Tuesday, a grand jury heard from several witnesses before returning an indictment on Tuesday afternoon.

In addition to felony murder charges, Heinze and Hutchens are both charged in the indictment with aggravated assault, burglary in the first degree, false statements, and violation of oath.

"It is very unusual in Georgia to see law enforcement officers charged with murder in a case like this," he said.

While the felony murder charge against a police officer is rare, Monteria Robinson said she wasn't surprised based on conversations she had with Fulton DA Fani Willis about the case and Willis' plans before it was presented to the grand jury.

"Was I expecting it, yes I was expecting that charge," she said. "The DA did inform me prior to the grand jury these are the charges."

Pate said this case appears to have factors that the district attorney believed justified pursuing a felony murder charge.

"The number of shots that were fired by law enforcement seems to be clearly excessive in this situation and also given the mental illness or at least the mental concerns people had about his health at the time, and apparently that was known by law enforcement, and certainly should have been, that can also be an aggravating factor," Pate said.

The indictment isn't the end of the road though for Monteria Robinson. She said she wants to now see the two men charged with her son's death convicted in court.

"We are ecstatic, we are happy," she said of the indictment. "This is one step further in the right direction. As I stated, we can start a new chapter."