The twins are serving 30 years for the crime. At first, the girls claimed innocence, but their story slowly changed 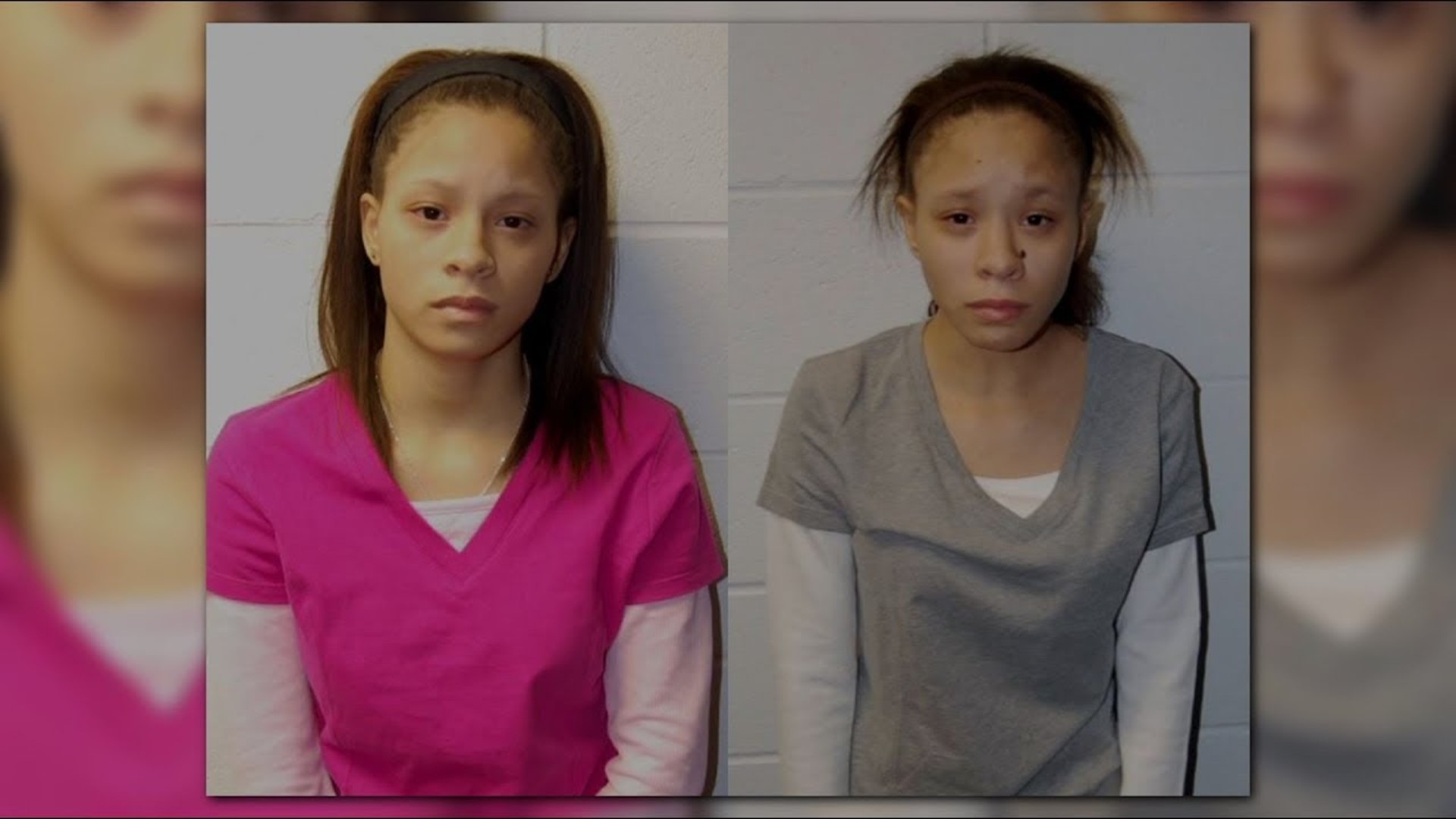 WARNING - SOME OF THE CONTENT THAT FOLLOWS CONTAINS VULGAR LANGUAGE, CURSING AND POSSIBLY OFFENSIVE MATERIAL

CONYERS, Ga. -- The crime was unfathomable and the trail of lies that came after was almost as shocking.

In a three-part special report, 11Alive's Catie Beck showed never before seen evidence in the case of Tasmiyah and Jasmiyah Whitehead, 16-year-old twin sisters who are now convicted of brutally killing their own mother.

The twins are each serving 30 years for the crime. At first, the girls claimed innocence, but as interrogation tapes show, their story slowly changed over time.

Here are more details about the interrogations, video from the police car after their arrest and their confessions.

Editor's note: This series of investigations originally aired and was published in 2014. Dateline NBC is re-airing the story in December 2019.

T : "You've gotta be strong because I'm going to make sure they find the person who did it"
J: "I want my momma"
T: "Did you thought I saw the body?
J: "I thought you did, I knew you came in the room, I didn't know you didn't come in the bathroom"
T: "I thought you knew I didn't see a body, I just asked you what it looked like"
Excessive crying, whaling
J: "I want my mommy" (baby voice)

T: "I heard Jas scream and then I saw blood all over the floor"
J: "I went in to her room and I saw the blood all over the floor and then I seen her and I touched her"
T "I looked and there was blood in front of the door like a line of blood, like someone had dragged her in there, like it is on tv"
D: "What time did y'all leave the house this morning?
J: "We missed the bus so we had to walk"
D: "You walked all the way to Rockdale?"
T: "It's not far"

D: "So you all didn't see her at all before you left for school?"
T: "Un uh no, she locked the door at night
J: "If we would have been there it would have never happened"
T: "Will they let us get a picture of her or something"

D:" Girls would your mom have opened the door for someone she didn't know"
T and J: Yeah, Yeah
Girls leave room to identify mom's boyfriends car on Facebook

Jas puts her head down
Tas kisses Jas and lays her head on top of her sister's
Girls sleep in silence on table
D: "Taz I need to see you in this other room please away from your sister"

D: "So you made it to all of your classes?"
J: "Yes"
D: "Is that the clothes you wore to school today"
J: "Yes"
D: "Any information that I might want to know that you haven't told me about"
D:" She would be drunk at that time?
J: "Maybe high, high, you know more when she's drunk than when she's high
Tas comes back in the room
D:" Are you wearing what you wore to school today"

SW : "I need you all to be as truthful with me as possible right now, yall didn't have anything to do with this"
Both twins: "No , nothing"

T: "I told her that I wish she were dead and she really did die I told her that plenty of times and she never died"
T: "That's crazy like that, I aint never killed nobody"

FSW: "You need to tell the truth, did you have anything to do with your momma?"
J: "No I swear to God I did not"
FSW: "This is serious
J: "I know that, I ain't hurt that much- I never told you I was going to kill her"
FSW: "I don't know, I really don't know
J: " Do you think we did it?
FSW: "No I don't think yall did anything"
J: "It just seems like the way you questioning us that y'all think we did it"
J: "We've been at school all day , we've been there all day, they can pull the records"
FSW: "Jas nobody is saying you did something, nobody is saying that"

Time lapse Jas up and down constantly freaking out without sister
Jas keeps getting up and trying to see her sister
J:"Where she at?"
D:"Be calm and sit down"
Jas crying and rocking back and forth
J: "You're always leaving me alone"

Jaz walks out of the room still whiny crying
D: "Sit down here"
J: "I don't want to be alone"
J: "Why do y'all have to separate us?"
D: "Because we need to talk to you separate, I know it sounds mean but it's really not"
J: "Y'all think we're lying?"
D: " I didn't say that"
D:"I need you to be calm and sit right there"
J:" I want my momma
Jas gets up again
Jas bites on her own hands in the room by herself

Freeze frame, tas looks directly in to the camera

Tas puts McDonalds bag back , puts head on lap
T: "I can't eat, mom is dead, stupid scratch, they are going to blame me because of a stupid scratch"
T: "I really want them to catch this person – please God"

Tas lays across chairs and attempts to sleep

EXTENDED VIDEO OF GIRLS IN POLICE CAR AFTER ARREST:

Jas Confession (Talking about the night of January 11th)

Detective: And when your mom came back, what happened in the house?
Jas: That night?
Detective: That night.
Jas: Umm, she was a little drunk so the same think always when she's drunk… she's talking crazy.
Detective: Now what do you mean by that? What was it that she had been saying?
Jas: When she drunk she just hallucinates and she sees things and she's not in her right mind.
Detective: Can you give me an example from that night?
Jas: Since we were kids we lived with our mom, and when our mom did come home she might be drunk or whatever, she would see things… she would think there were bugs on her or she would think there was an earthquake, things like that. So she would say, she would come get us out of bed or something and ask us to get the bugs off of her, things like that. That night, I don't know how she was that night, she was just drunk. I think she went in her room, got on the phone, came back and asked us questions like "why ya'll doin' this, why ya'll doin' that, why ya'll doin' this"… just antagonizing.
Detective: How did that night end?
Jas: Well, we angry, we mad, we didn't get along.

(Describing the morning of January 12th)

Tas Confession (Referring to the night of January 12th)

DA: What made you believe that your mom was drunk and high?

Tas: Cuz I know her and I've witnessed how she acts when she's high and drunk

DA: How was she acting?

Tas: Well, when she either drinks or smokes she gets like this paranoia. So she says stuff like "Check your doors"; "Keep checking the door"; "Check under the bed"; "Everybody get in the closet"; "Everybody get out the closet"; "Go check the windows"; "The police out there?"; "The army comin'"; stuff like that. Thoughts don't hold for a long time. So one minute she'll be talking about the police comin', then she'll talk about cookin' something, then shes talking about car parked (?), stuff like that. And then she has this thing with her mouth (Tas demonstrates moving her jaw side to side) like that.
DA: Was she that way? Was she making those comments that night?
Tas: Yeah she came in saying all that I already knew. So at one point she was like "Lock the door", so we did and then she was like "Unlock the door". And then she was acting like that so I kept my door locked and she got made about the door being locked and then she continued with (complaining about) the laundry.

(Referring to the morning of January 13th)

Tas: …Jas kind of just walked to the kitchen, she was rigght behind me. My mom was in there, I don't know if she had already been asleep or if she was still up from the night.