He worked for over two decades as an investigator for the Brunswick District Attorney, but records show for several years he fell behind on training. 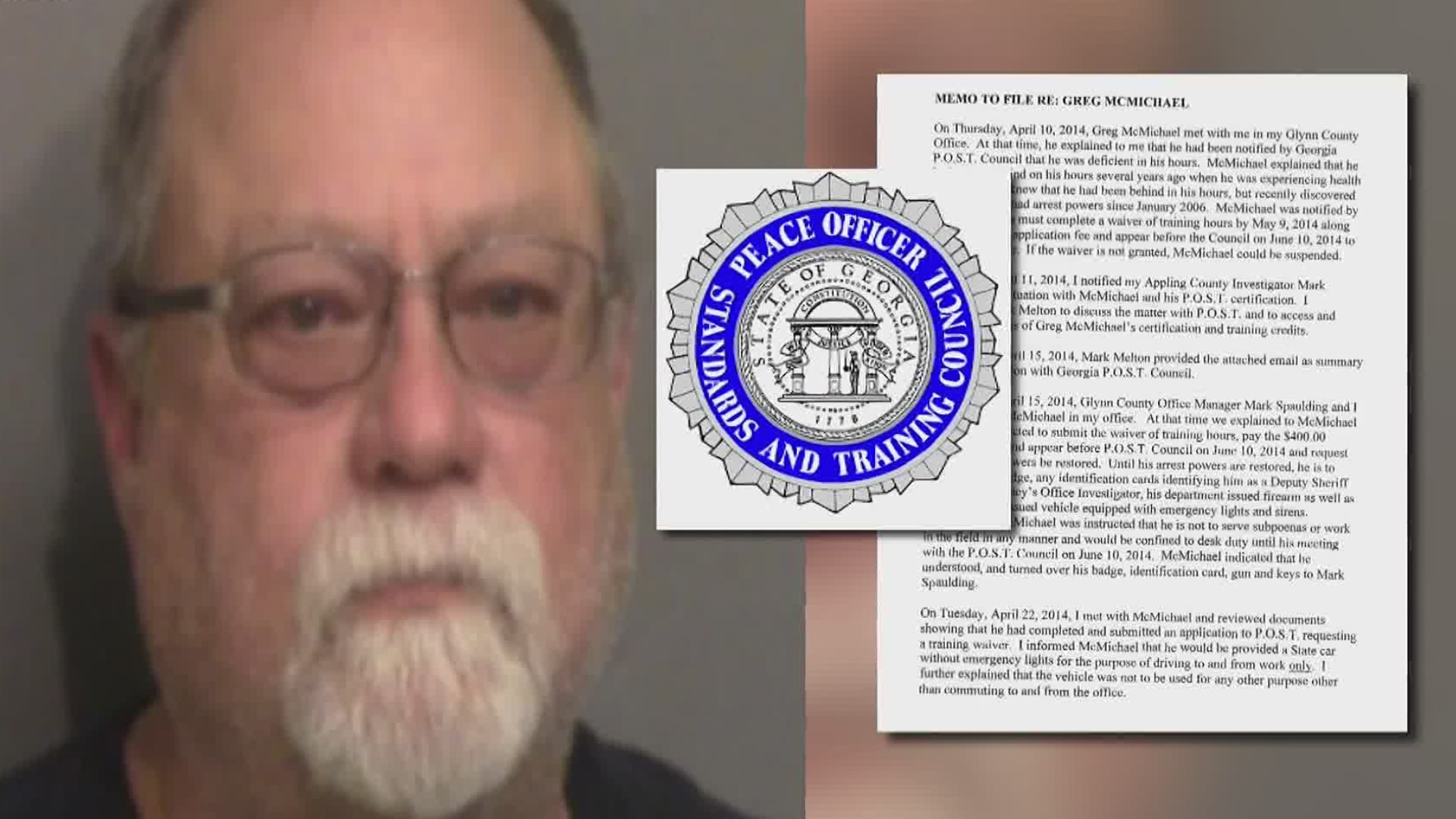 ATLANTA — Gregory McMichael and his son Travis McMichael are charged with the February murder of Ahmaud Arbery in a Brunswick neighborhood.

On Wednesday, the Brunswick District Attorney's office released Gregory McMichael's personnel file to 11Alive. It details his employment as a chief investigator with the office from 1995 until 2019.

Included in the file is a memo from 2014. In the memo, McMichael mentions receiving a notification from Georgia P.O.S.T Council that he was behind on his training and certification hours.

Georgia P.O.S.T. is the state organization responsible for certifying sworn officers across the state.

"He knew that he had been behind in his hours, but recently discovered that he has not had arrest powers since January 2006," the memo reads. "McMichael was notified by P.O.S.T. that he must complete a waiver of training hours by May 8, 2014 along with a $400.00 application fee and appear before the Council on June 10, 2014 to request a waiver. If the waiver is not granted, McMichael could be suspended."

It is stated in the memo, "Until his arrest powers are restored, he is to hand over his badge, any identification cards identifying him as a Deputy Sheriff or District Attorney's Office Investigator, his department issued firearm as well as his department issued vehicle equipped with emergency lights and sirens."

Receiving a waiver would allow McMichael to continue his employment with the DA's office while working to regain proper certification.

In a letter McMichael wrote and submitted with his application for a waiver, he listed several reasons for lacking proper training hours from 2005 - 2010.

He describes two heart attacks, depression following one of the attacks, surgery to remove a portion of his colon, his wife's cancer treatment, and filing for bankruptcy due to "overwhelming medical bills."

Included in McMichael's personnel file is a letter from Mark Melton, another investigator in the Brunswick DA's office. In the letter written to District Attorney Jackie Johnson, Melton describes speaking with Mitch Jones, the director of Georgia P.O.S.T. about McMichael's training hours.

Melton wrote: "According to Mr. Jones, liability for any improper actions by Greg would fall on Greg, the District Attorney's Office and you (Johnson) personally."

After McMichael was granted a waiver, Johnson wrote a letter to Jones thanking him for his assistance during the waiver process. Toward the end of the letter, Johnson said: "This situation has been a great embarrassment to me and to Investigator McMichael. It has negatively impacted my office, and I have taken measures to ensure that this doesn't happen again. Please accept my sincere apology."

RELATED: Why is the Ahmaud Arbery case different?

In 2019 though, Georgia P.O.S.T. suspended McMichael, according to documents in his personnel file, for "failure to maintain training for the year of 2018."

A memo from Jackie Johnson's office shows two weeks after the suspension, McMichael was reassigned to a non-officer position, from February 2019 until his retirement in June of 2019.

The memo states, "McMichael will not engage in any activity that would be construed as being law enforcement in nature. To that end, Mr. Michael will not carry a firearm or badge, nor will he operate any vehicle in the motor pool outfitted with lights, siren, or police radio equipment."

11Alive on Wednesday didn't receive a response to an inquiry sent to the DA's office asking if Johnson had any comment on the previous lapses in training by McMichael and asking if McMichael made any arrests during the period from 2006 until 2014 when he lacked the power to make arrests.