The incident at University Avenue sparked a protest at the scene. Cell phone video captured portions of the incident, according to a lawyer. 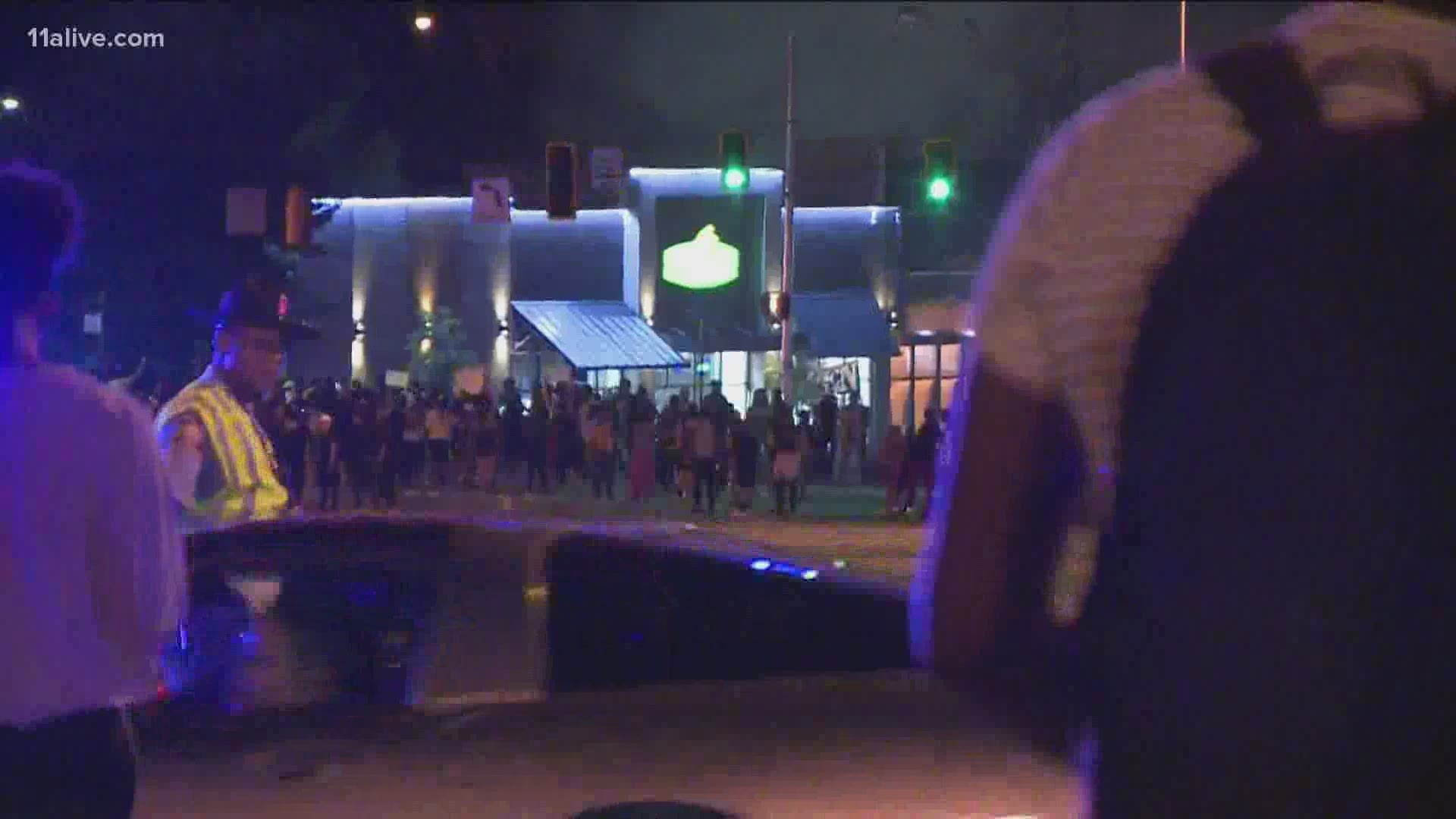 ATLANTA — An man was shot and killed in a confrontation with police at the Wendy's restaurant on University Avenue on Friday night.

As a result of the shooting, Atlanta Mayor Keisha Lance Bottoms called for the termination of the officer involved in the shooting, who police confirmed had been terminated.

The mayor also said Atlanta Police Chief Erika Shields also agreed to step down. Atlanta Police Deputy Chief Rodney Bryant will serve as the interim chief. Shields will continue in a role "to be determined." A search will begin for a new chief in Atlanta as well.

Soon after the shooting, a crowd gathered at the scene to protest the fatal shooting.

Witnesses indicated that Brooks grabbed the Taser from the officer.

Reynolds said that surveillance video from the Wendy's "very clearly" showed that Brooks was running away while carrying the Taser he had taken from one of the officers.

Brooks was taken to Grady Memorial Hospital and, according to the GBI, he died during surgery. His family released this picture to 11Alive.

Following the incident, the two officers involved in the shooting were removed from duty pending the outcome of the investigation. Early Sunday morning, police identified the officers, saying one, Garrett Rolfe, had been fired, while the other, Devin Bronsan, was placed on administrative leave.

RELATED: Officer fired, another on administrative leave after deadly shooting of Rayshard Brooks

Atlanta District three City Councilman Antonio Brown was at the scene during a portion of the investigation. He told 11Alive News that a number of people had called him shortly after the incident occurred. Brown said that he felt it necessary to come to the scene to see for himself what was going on.

According to police, the protest at the scene remained peaceful throughout the afternoon and they said they understand the concern of those who are there.

Councilman Brown told 11Alive News that he felt the peaceful protest was a reflection of the discomfort that people have with the police during this time.

"This is a reflection of what is truly transpiring in our country, not just the city of Atlanta," Brown said.

UPDATE: Wendy's where man was fatally shot by police goes up in flames

He said that the way information is being disseminated is a major problem.

"I was informed (initially) that there was a body that's still here and that the body was never transported," Brown said. "After the incident, the individual involved in the altercation with the local police was immediately transported to the hospital."

Late Saturday morning, Brown told 11Alive News that he had spoken to Atlanta Police Chief Erika Shields about the shooting and how it had occurred.

Brown said that Chief Shields told him that Brown had been shot in the back and the buttocks.

In a statement early Saturday afternoon, Fulton County District Attorney Paul Howard said that his office has already launched its own independent investigation of the shooting incident.

"Members of the Fulton County District Attorney's Office were on scene shortly after the shooting, and we have been investigative sessions ever since to identify all of the facts and circumstances surrounding the incident," Howard said in the statement. "We are asking anyone who saw the incident to call the Fulton County District Attorney's Office Tip Line at 404-612-4903."

Some family members of Brooks gathered outside the restaurant Saturday afternoon as protesters stopped traffic on the street out front with calls of "No Justice, No Peace."

One of Rayshard Brooks' cousins spoke on behalf of his family outside the restaurant. He declined to give his name, saying only that he should be known as "Rayshard Brooks."

"That's my name, and that should be every black man's name here in our city," he said.

He was very emotional as he spoke to reporters.

"I don't know how to do this, because I never knew I was going to have to do this. I watched this on the internet, from the whole George Floyd situation to coming together like we're doing, and this whole thing landed on my doorstep," he said. "I thought Atlanta was higher than that; I thought we were bigger than that."

His voice cracked as he held one of his sons.

"I just want to make enough noise that they investigate this situation. Don't let Rayshard die in vain like that," he said. "We've watched this happen for so many years, these young black boys dying in vain. I just don't want that to continue."

Atlanta City Councilperson Joyce Shepard spoke to protesters at the restaurant Saturday afternoon, telling them that in her opinion, the officers involved "got to go."

"He ran away from the police officers," Shepard told the crowd. "Running away from police officers; he don't have a gun, is there any reason to shoot him? No! So, my position is they got to go!"

"@KeishaBottoms, @Atlanta_Police needs a serious overhaul. The continuation of these kinds of actions require immediate resolution. Instead of seeing an improvement, it continues to happen day after day. Chief Shields must be relieved immediately."

The GBI will continue its independent investigation of the incident. Once completed, the case will be turned over to the Fulton County District Attorney's Office for review.

According to the GBI, this is the 48th officer-involved shooting their agency has been asked to investigate in 2020.