Videos captured the final moments of Ahmaud Arbery's life. An Arbery family attorney tells 11Alive it is evidence prosecutors have had since February. 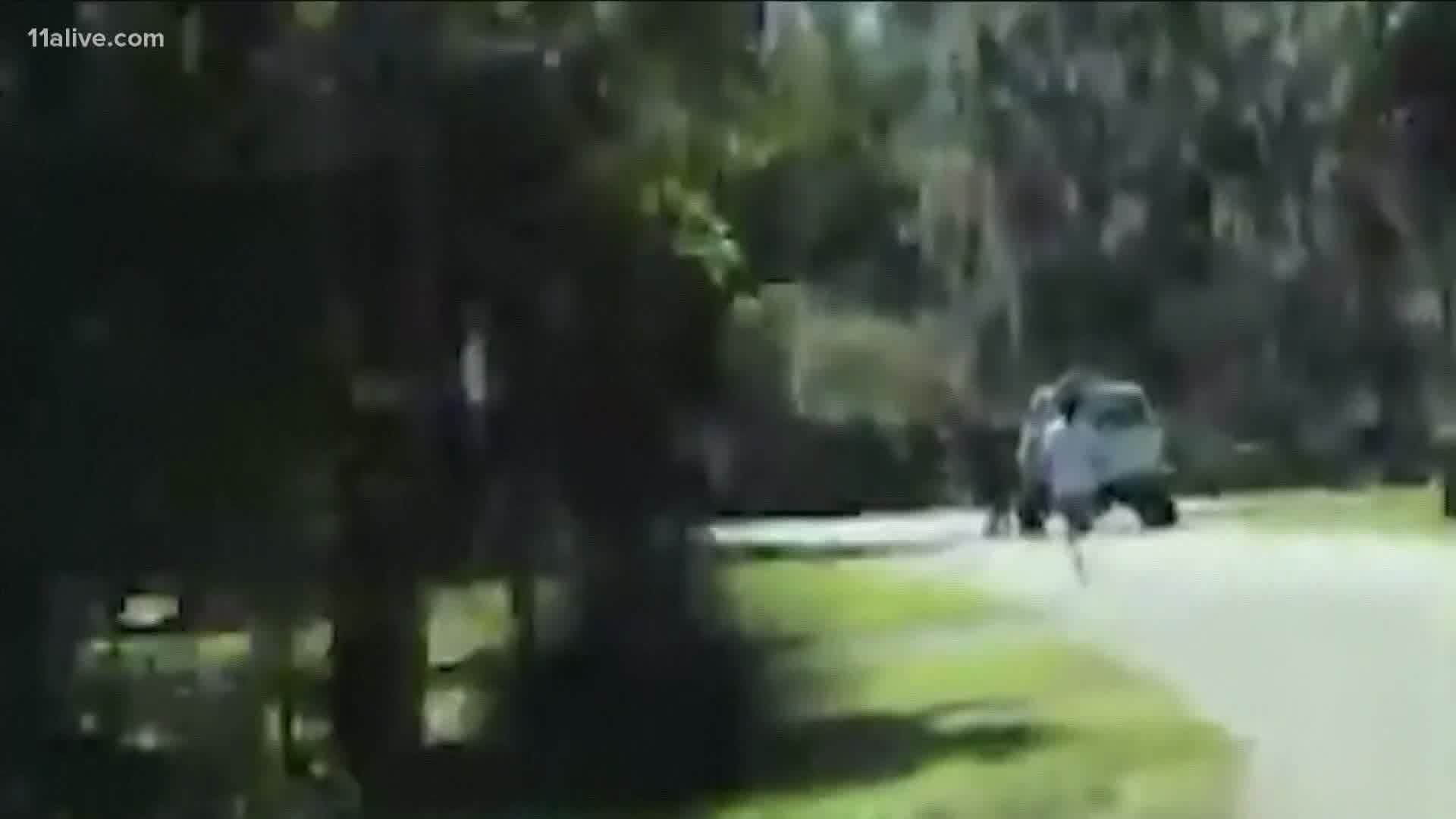 ATLANTA — At the center of the Ahmaud Arbery murder case in Brunswick, are several video clips that appear to show show the final moments of his life.

Two men in the video of the shooting, identified by law enforcement as father and son, Gregory and Travis McMichael, have since been arrested and charged with murdering Arbery.

The father and son told police they thought Arbery had burglarized a home in the Satilla Shores Neighborhood.

Several short home surveillance video clips from moments before the shooting, show someone entering an under-construction home, walking around inside and then leaving.

The home in question is owned by a man named Larry English. His attorney, J. Elizabeth Graddy sent 11Alive a lengthy statement stating English was 90 miles from the home on February 23.

"Mr. English has a serious medical condition, which has been aggravated by the stress of responding in the wake of the McMichaels' actions," Graddy wrote. "Because the English family live 90 miles away from the home that is under construction, Mr. English had a motion-activated security camera installed."

According to Graddy, around October 19, 2019, there was a small number of times when a person or people entered the under-construction house at night without permission.

"Mr. English has never said that Mr. Arbery was the person or persons in any of those night-time videos, and he cannot identify the person now," Graddy wrote in the statement. "He never used the word "burglary." He never shared any of this information with the McMichaels, whom he did not even know. Nothing was ever stolen from the house -- which, again, was a construction site."

Graddy describes English receiving a notification of the motion-activated security camera recording on February 23, but he didn't watch the video for approximately 20 minutes.

After watching the video, English called a neighbor, asked if they could see someone in the house and the neighbor told him a man had just been killed in the neighborhood. The man killed would later be identified as Arbery.

English also offered his condolences for the Arbery family.

"The homeowners were shocked and deeply saddened by these events, which they learned of after-the-fact. The homeowners are parents, and they are heartsick for Mr. Arbery's mother and father. Larry English and his family are praying for the Arberys."

A man identified in police reports as a witness to the shooting of Arbery is William "Roddie" Bryan. He is the man who recorded the video showing Arbery being shot and killed as he jogged through the subdivision.

An attorney for the Arbery family tells 11alive that Brunswick-area prosecutors had the video since February, well before it was uploaded to social media last week.

In the past week, the Georgia Bureau of Investigations joined the case, and Director Vic Reynolds in a press conference called the video an important piece of evidence.

"I'm very comfortable in telling you that there is more than sufficient for probable cause in this case for felony murder," Reynolds said.

According to the GBI, Bryan is also under investigation.  He is represented by attorney Kevin Gough.

"It was Mr. Bryan who videotaped the incident in question, disclosed the existence of the videotape, and invited a responding Glynn County Police officer to sit with him in his truck where they watched the video together," Gough said in a press conference shortly after the video was released.

At the time Gough spoke on Bryan's behalf, with Bryan standing by his side. Bryan has been interviewed on several national news shows. While being interviewed by CNN Anchor Chris Cuomo, Bryan discussed the video and said, "I hope that in the end, it brings justice to the family and peace to the family."

But during the interview, Gough shutdown questions by Cuomo directed at Bryan's actions in the moments leading up to the shooting, with the man's attorney saying "this man cannot be answering substantive questions about the case."

"If I hadn't of been there, there would be no video," Bryan said during the story aired by Good Morning America.

During segment, Bryan didn't discuss specifics of the video but did express his sympathy for the Arbery family.

"I regret that family lost a loved one," Bryan told ABC News.

Calls to Gough by 11Alive to interview Bryan directly haven't been returned.