"Every last one of them licked me in the face. Despite everything they've been through. These babies just want to be loved." 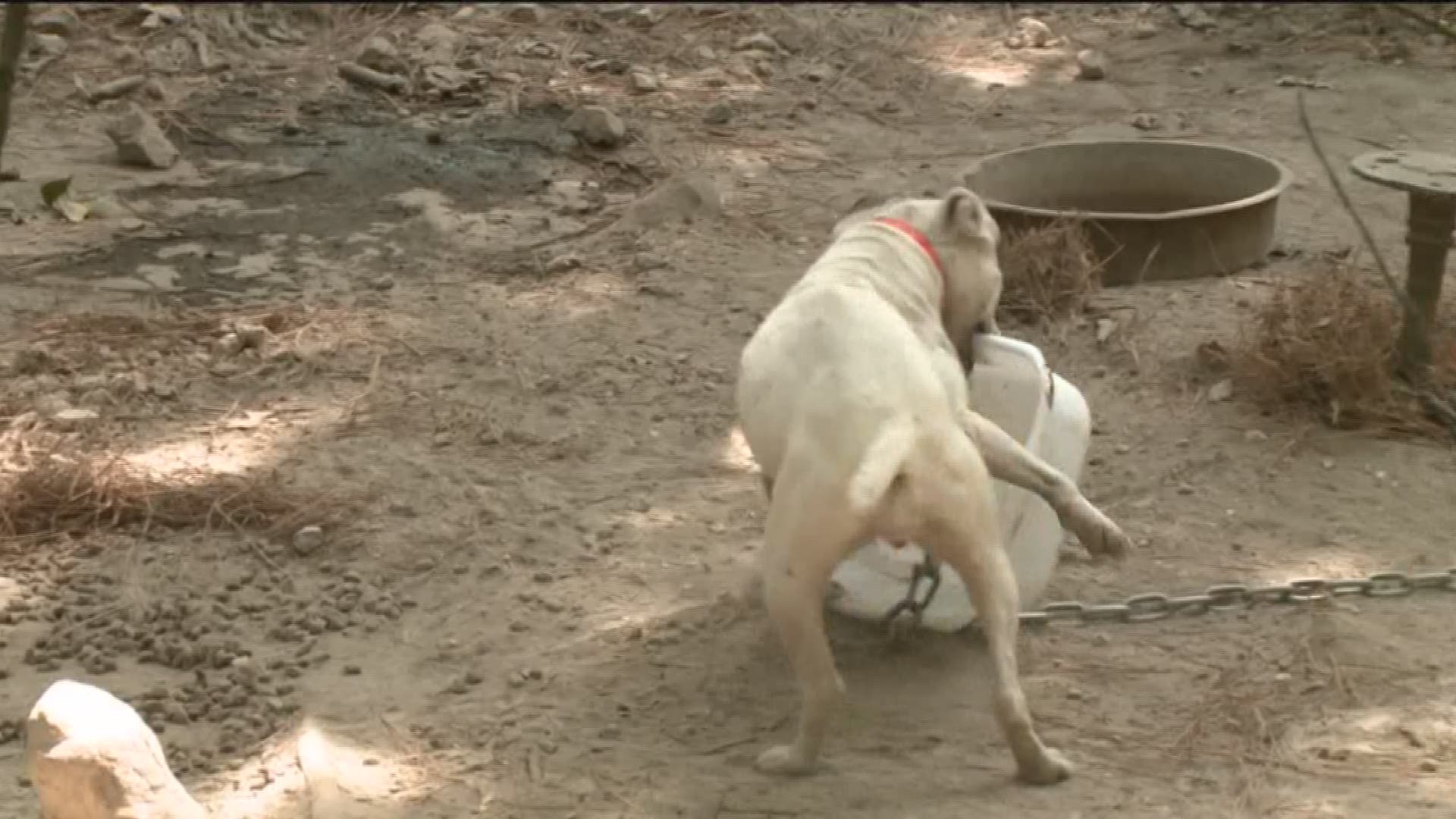 ARAGON, Ga. – The number of dogs found left abandoned in the woods of Polk County, Ga., has increased to from 70 to 100.

Their necks were shackled with thick chains wrapped around trees. Their beds were large plastic barrels flipped on their sides, and some in cages too small for them, with no escape. Their food and water bowls were empty and bone-dry. Still, their tails wagged and they gave plenty of kisses.

Because, what they missed the most? Love and attention.

“Every, last one of them licked me in the face. Despite everything they've been through,” Polk County Police Chief Kenny Dodd said about the worst case of animal abuse he has ever seen.

“I’ve petted every one of them at least three times. They don't mean anyone any harm. These babies just want to be loved.”

A tip from an anonymous person led animal control and police to the Cashtown Road property, where what they found, was horrifying.

“None of these dogs are vicious. I have petted every one of them myself,” Dodd continued about the emaciated pit bull-mixed dogs found in a wooded area in Aragon, Ga., just off GA 101.

Many were severely malnourished to the point where you could see their ribcages.

There’s no blood present, but there are scars. A lot of scars.

“They've been abused at one time,” Dodd said. “It's devastating, especially if you're an animal lover. I have three dogs at home, and it just makes you want to cry, really.”

It’s unclear how long the dogs have been left neglected in the woods, he said, approaching each of the dogs in an effort to access the damages to them.

“This is devastating to see animals treated this way. They've been running in circles so long, they've dug a foot hole in the ground.”

RELATED | Police: On scene of ‘worst cruelty-to-animals cases we have ever seen' 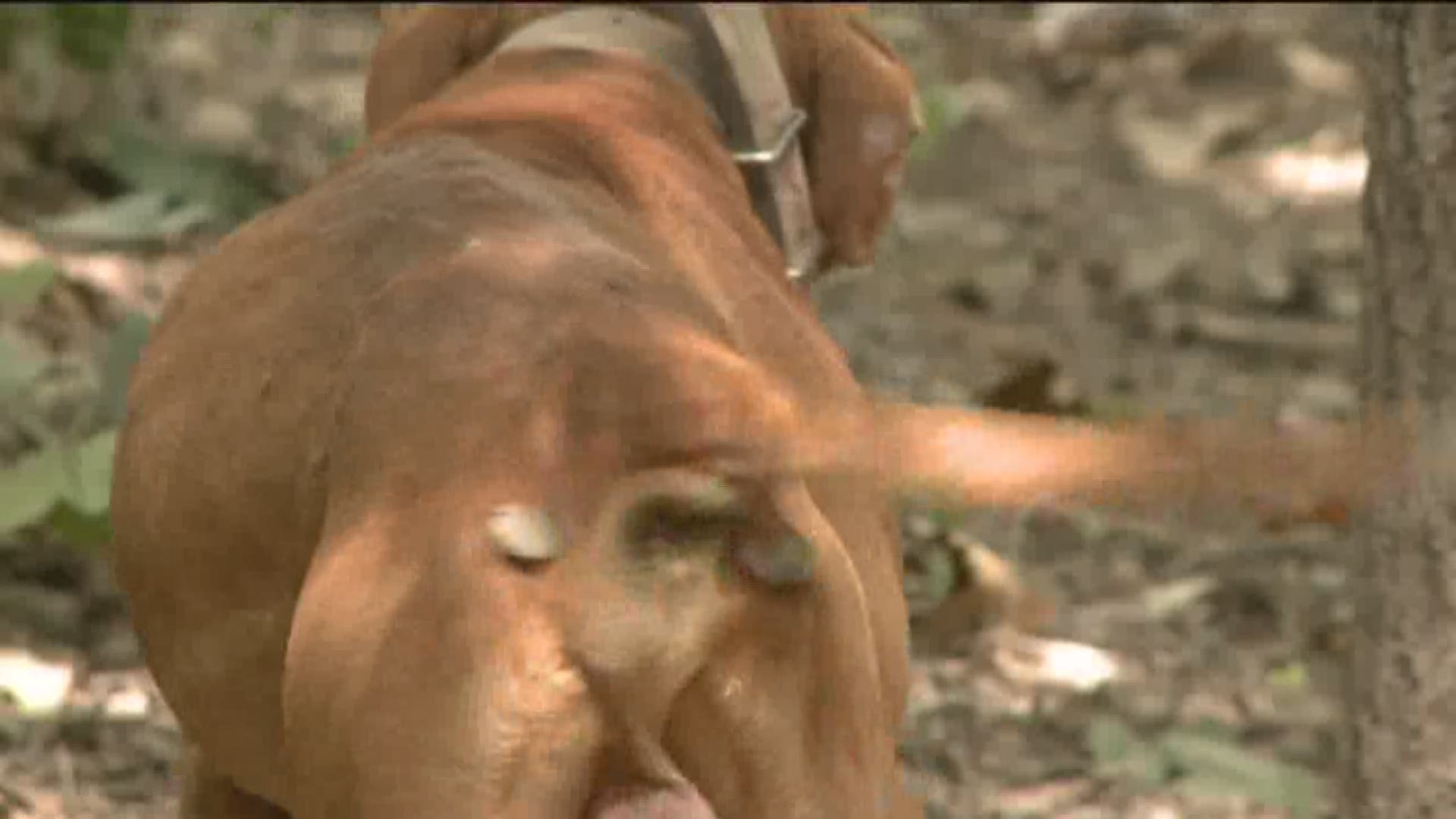 According to police, the property was foreclosed, and its former owner, 32-year-old Devechio Rowland, was arrested Monday morning, and faces 70 counts of animal cruelty, a misdemeanor.

But the chief would like to see stiffer punishment.

“We wanted felony, but according to the statute, it has to be aggravated, which means he has to break their bones or damage them, so it doesn't meet the threshold of a felony.”

It's not the property owner’s first time being accused of running dogfights.

Devechio was also arrested and charged in 2010 for animal cruelty and dogfighting, as well as drug possession. The charges, however, were dropped after the main witness in the case died.

“It was hard to prosecute the case, so most of the charges were dismissed against him because of that witness not being able to testify. So hopefully this time we'll get justice,” Dodd said.

While 11Alive was on the scene Tuesday afternoon, officers found another property owned by Rowland with 35 more dogs in worse condition.

And Dodd said those dogs undoubtedly showed evidence of dogfighting with distinctive scarring, which would bump Rowland’s charges up to felonies.

“I don't really know what the purpose of having 70 dogs tied in the woods is. Unless you're breeding... he doesn't have a license to be a kennel. So, it's hard to imagine the purpose unless you're doing something illegal.”

The police department returned Monday night and Tuesday to give the dogs food and the Polk County Fire Department brought them water. And according to Paulding County Sheriff’s Office’s Twitter page, the Paulding County Animal Control is taking up food donations for the dogs.

The dogs are so friendly, the chief said he worries that at least some of them may have been pets, stolen from nearby families.

“They appear to be pets, they're so friendly and so lovable. We've had an overwhelming response from people on Facebook sending pictures and wanting us to see if it's their dog.”

Volunteers with animal chip readers made their way out to the property to identify any pets who may have been stolen, Dodd said.

Also, animal control is working to getting all the dogs out of the woods by nightfall. As soon as all the dogs are in custody, local rescues will begin the process of getting them adopting out or put into foster homes, Dodd said.